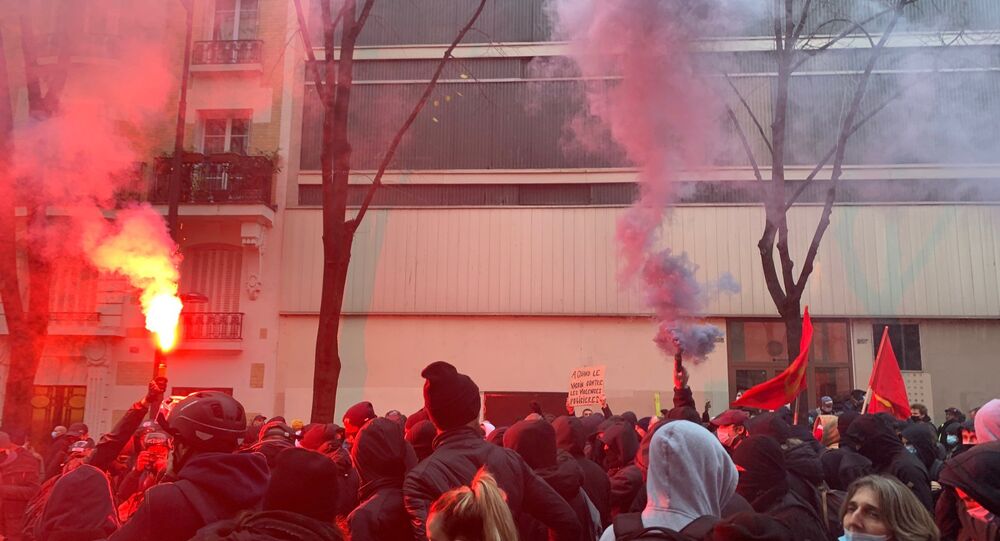 The approval of the Global Security bill and its Article 24 in particular sparked protests across France last Saturday, held in over 70 cities, with the most active ones taking place in the capital.

Violence and clashes have erupted in Paris between the police and a group of hooded and masked protesters in black on Saturday as Parisians have gathered for a new round of demonstrations against the so-called 'Global Security' bill proposed by the French government.

The protesters were seen launching rocks and firecrackers at the officers prompting police to use tear gas. Not unlike last week, the demonstrations ended in the surrounding buildings and shop windows being damaged and cars set on fire in central Paris as protesters proceeded to the Place de la Republique.

According to the Interior Minister Gerald Darmanin, the police have arrested 22 people at the protests.

​The protest comes as a sequel to last week's demonstration against Article 24 of the 'Global Security' bill, by which distributing images of police officers and gendarmes that can lead to their physical and psychological harm is punishable with a fine of 45,000 euros ($54,000). Opponents of the bill believe it may stifle mass media freedom.

On Monday, the majority of French legislators agreed it was necessary to revise Article 24.