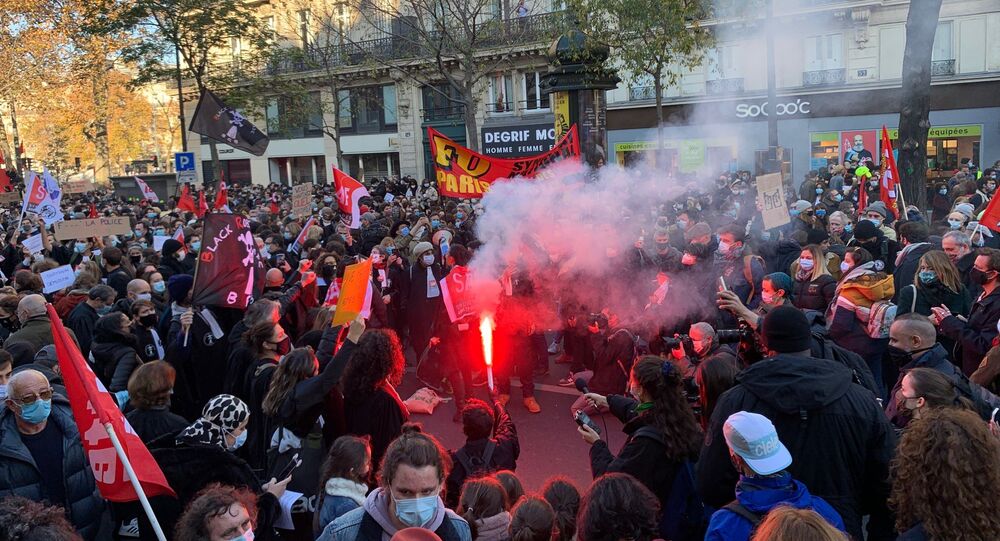 MOSCOW (Sputnik) - The tally of French law enforcement officers injured as a result of Saturday nationwide protests against the new security legislation has been finalised at 98 people, French Interior Minister Gerald Darmanin said on Sunday.

On Saturday, protests were held in over 70 cities across France, most actively in Paris, against the new draft "security bill" criminalising the display of images of law enforcement officers.

The rallies in Paris grew into unrest and clashes with police. which resulted in multiple injuries. Darmanin's previous update on Saturday evening stated 37 officers injured.

"Final assessment — 98 wounded among the police and gendarmes. I express my full support for them. The perpetrators of this violence must be held accountable", Darmanin wrote on Twitter.

According to the French Ministry of the Interior, around 130,000 people attended the protests on Saturday, while the protest leaders have claimed the number of people who took to the streets was much higher — 500,000. The Paris Police Prefecture said on Twitter that it conducted at least 46 arrests on Saturday for violence against officers, prohibited weaponry and other violations by protesters.

The most radical protesters were seen setting vehicles on fire, throwing stones and launching fireworks and using high-powered lasers against the officers. Police responded with tear gas and water cannons in order to disperse the angry protesters.

#Paris #France
(Yesterday)
After a demonstration against a new French security bill (making it illegal to photograph police officer) turned into violent riots, several vehicles were set ablaze by rioters in Paris.

The controversial legislation was passed at the French parliament's lower house on Tuesday, immediately sparking a broad public decry, especially among journalists. The bill entails one-year imprisonment and a fine of 45,000 euros ($54,000) in punishment for the distribution of images of police officers and gendarmes that can potentially lead to their physical and psychological harm.