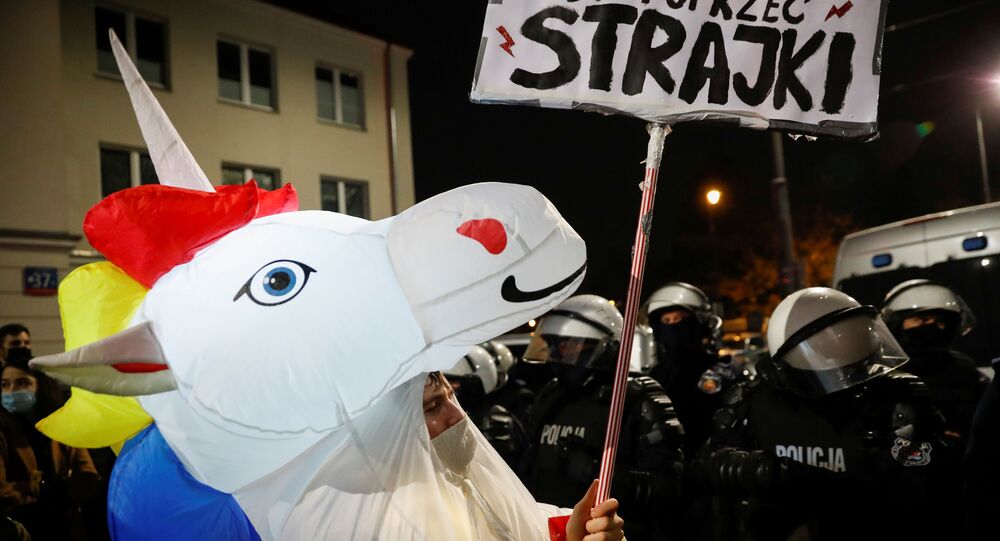 WARSAW (Sputnik) - Poland's feminist organization Strajk Kobiet (Women's Strike) has organized a protest in downtown Warsaw on Saturday to draw public attention to the decision of Poland's Constitutional Court to outlaw abortions and to commemorate the 102nd anniversary of women's suffrage in the country, a Sputnik correspondent reported.

On Roman Dmowski Square, protesters are chanting "My body – my business!", "Legal abortion!" and other slogans critical of Poland's governing right-wing Law and Justice Party that initiated the court's consideration of the issue.

A significant number of police officers have been deployed at the scene, but they are just asking some protesters to show their identity documents and have not interfered yet.

A video from the scene of the protest was shared online.

​The rally is attended by representatives of other organizations as well, particularly from the LGBT and feminist communities.

The protesters have "renamed" Roman Dmowski Square into Women Rights Square, placing new name plates on top of the original ones.

The protests against the anti-abortion law have been also held in other cities of Poland on Saturday.

The rallies were ignited by the October 22 decision of the constitutional court to rule that abortion due to fetal defects was unconstitutional. After the ruling goes into effect, women in Poland will be able to legally terminate pregnancy only in case of rape or a threat to their health.