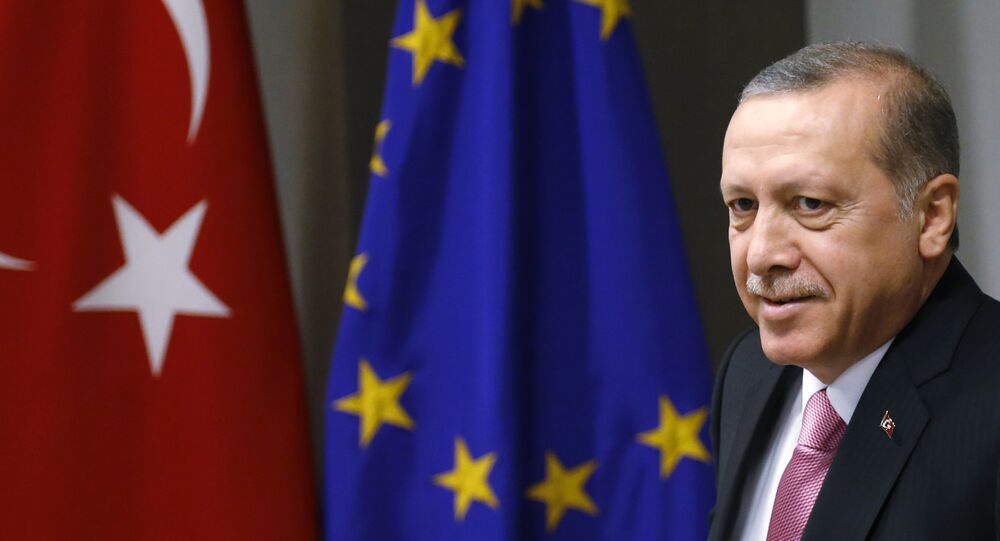 Turkey's Erdogan Expected to Stand Down in Spat With EU If Bloc Shows Unity, Reports Suggest

MOSCOW Sputnik) - Turkish President Recep Tayyip Erdogan is predicted to stand down in his row with the European Union should the bloc's member states show unity and mount a convincing challenge, a source in Brussels told the EURACTIV portal on Wednesday.

"We believe that if Europe shows the first sign of unity, Erdogan will back down, to slap him back somehow", the source said.

The EU has clashed publicly with Turkey throughout the year following Ankara's decision to anger Greece and Cyprus by conducting seismic exploration surveys in the Mediterranean Sea.

As recently as this week, Turkey refused the EU's Operation IRINI request to board a Turkish merchant vessel in the Mediterranean that the bloc believed was violating the United Nations arms embargo on Libya, resulting in condemnation from Brussels.

According to the portal's source, Turkey's actions may be an attempt at testing the waters before seeing the bloc's reaction or may indicate that Erdogan is seeking a full-scale confrontation.

"Last Friday (20 November) a meeting with Erdogan's adviser Ibrahim Kalin took place, on Saturday Erdogan said Turkey belongs to Europe and at the same time he issued a new NAVTEX in the Eastern Mediterranean and then the incident with IRINI operation occurred. It seems that Erdogan is kidding, testing waters or wants a total confrontation", the source said.

The EU has also blamed Turkey for the reopening of the previously fenced off Varosha coastline area in the breakaway Turkish Republic of Northern Cyprus.

Speaking this past Thursday, the bloc's foreign policy chief, Josep Borrell, said that Turkey was "widening its separation" with the European Union as relations between Brussels and Ankara deteriorate.