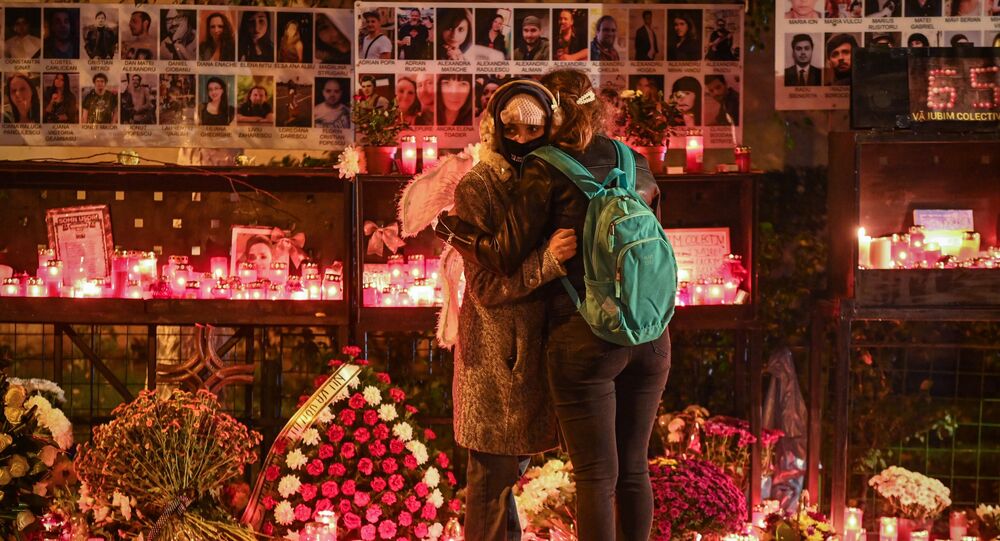 How Did a Heavy Metal Band’s Pyrotechnic Show Lead to the Downfall of Romania’s Prime Minister?

On 30 October 2015 a fire broke out in a nightclub called Colectiv in the Romanian capital, Bucharest. But although a pyrotechnic display was ultimately to blame the blaze exposed a shocking seam of corruption in Romania.

A new documentary, which comes out on Friday 20 November, exposes the staggering levels of corruption in Romania which helped bring down Prime Minister Victor Ponta.

Collective, which tells the tale of how a fire in a Bucharest nightclub snowballed into a major political scandal, got its world premiere at the 2019 Venice Film Festival and is released in cinemas in UK and across Europe this week.

The film starts with footage of thrash metal band Goodbye to Gravity setting off a pyrotechnic display during a Halloween party in the Colectiv nightclub in Bucharest.

The pyrotechnic display triggered a fire in polyurethane acoustic foam in the club’s ceiling and 27 people died that night, including four members of the band - guitarists Vlad Țelea and Mihai Alexandru, drummer Bogdan Lavinius and bassist Alex Pascu.

Crowds of around 20,000 came onto the streets of Bucharest in the wake of the fire, protesting at corruption after it emerged the club had been allowed to stay open despite being unsafe.

But what happened next is at the heart of the film - a further 37 people died in Romanian hospitals over the next few months, many of them as a result of infections which should have been prevented if it were not for corruption in the healthcare system.

A team of investigative journalists from one of Romania’s leading sports newspapers, Gazeta Sporturilor, led by Cătălin Tolontan, began digging.

​They found a firm called Hexi Pharma had been diluting hospital disinfectants, causing bacteria to grow in surgical sterilisation tanks.

Tolontan’s team also learned that corrupt hospital managers were embezzling money and either building themselves houses or setting up lucrative private clinics in Switzerland.

The film’s director Alexander Nanau said: £The hospital corruption and subsequent government cover up in Collective took place in Romania. Yet this not just a local story. There is a universality which is even more relevant post Covid."

© REUTERS / Inquam Photos/Octav Ganea
Thousands of people rally demanding government resignations as the death toll from a night club fire at the weekend reached 32, with dozens more in the hospital in critical conditions, in Bucharest, Romania November 3, 2015.

He said: "Government corruption is sadly all too familiar across the world and the need to safeguard social justice and press freedom feels more urgent than ever. These are freedoms that have been compromised lately in the UK.”

Although the COVID-19 crisis has not yet led to any corruption scandals, eyes were raised earlier this week when it emerged that £21 million in public money was paid to a Spanish businessman, Gabriel Gonzalez Andersson, involved in a deal to buy PPE equipment for NHS staff.

A UK Department of Health spokeman told the BBC: “Proper due diligence is carried out for all government contracts, and we take these checks extremely seriously.”

In Romania, the consequences of the shocking reports by Gazeta Sporturilor - a newspaper which had previously only exposed corruption in football - were seismic.

The club’s owner Alin George Anastasescu and two associates were convicted of negligent homicide last year but have appealed. The prosecutors said the club only had an insufficient number of exits, the ceiling foam had not been fireproofed and the club was overcrowded.

Adrian Albu, whose sister and cousin died in the fire, told Reuters recently: "We should know who is guilty and people should know that the same thing can happen again at any moment and we are as unprepared now as we were then.”

Nanau’s film features interviews with Tolontan and his team of journalists, with Romanian hospital whistleblowers, survivors of the fire and politicians in Bucharest.

Romania has had seven prime ministers since Ponta resigned in November 2015 and is still battling to get corruption under control.

Last month Romania’s President Klaus Iohannis gave final approval to legislation which will cover any future medical expenses of those injured at Colectiv.

But Marian Raduna, who took part in the 2015 protests, said: "Change must start with us citizens. We are the ones who tolerate corruption cases and incompetent authorities, and, sadly, we forget quickly."