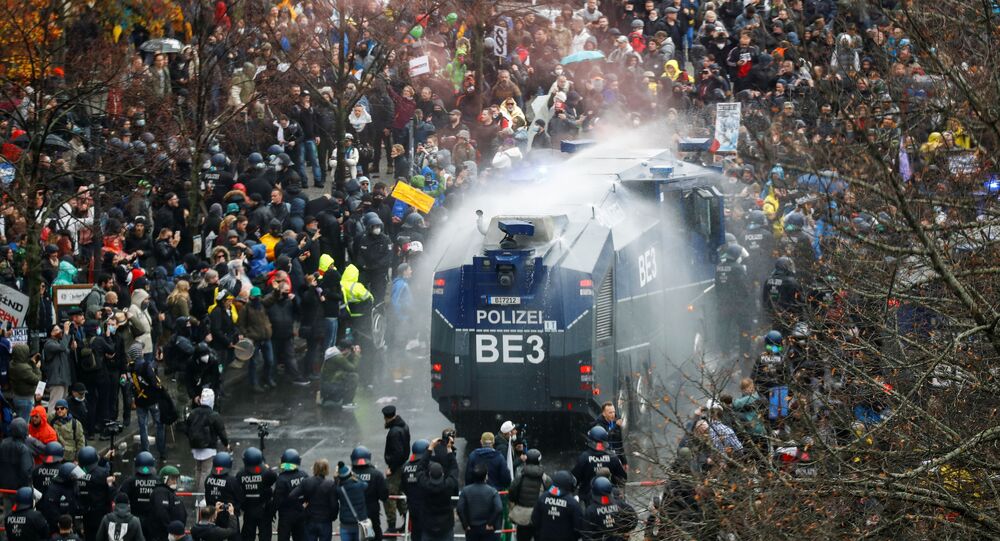 On Wednesday, Berlin police broke up rallies against imposing restrictions to curb the spread of COVID-19, as the protesters were not wearing facemasks and neglecting social distancing. At least 365 people were detained. The police used water cannons and tear gas to disperse people who had gathered near the Brandenburg Gate.

It is unclear for how long the German government will have to maintain anti-pandemic measures to slow the growth of new coronavirus cases across the country, Lothar Wieler, president of the Robert Koch Institute for infectious diseases, said on Thursday.

"We'll see how that works out. I can't predict that," he said at a virtual news conference.

On Wednesday, Bundestag adopted amendments to a law on protection against infections, enhancing the government’s power to impose new coronavirus safety measures - maintaining social distance, wearing masks, closing shops, restaurants and other venues. The decision caused large-scale demonstrations against the restrictions, as the Police reported between 5,000 and 10,000 demonstrators took part in the rally.

The German's are rising - they know all too well where anti-science and draconian laws head towards - and they ain't having any of it. #Berlin remembers 🤨 https://t.co/9X9abFjxXF

Who is endangering people's health here? The peaceful demonstrators or the police mercenaries loyal to the regime?#Merkel #Querdenken #Berlin #TRUMP2020ToSaveAmerica #Peace #Covid1984 pic.twitter.com/6gtXysPTEp

​The public voiced concerns over the government’s proposal, comparing recent amendments to the Enabling Act that was passed in 1933 and gave Adolf Hitler and his party absolute power over the country. As in other countries where citizens' discontent over the government’s plans for introducing lockdown grows, Germans claim that the amendments are nothing but expansion of Angela Merkel's powers over the legislative branch.

#Germany pushing a new anti covid law through parliament today which basically erases most of the basic civil rights while peaceful protestors outside parliament in #Berlin are being brutally attacked by #Merkel police pic.twitter.com/gNyRT4h28U

​Earlier this month, the German government introduced month-long restrictions in a bid to curb the spread of the coronavirus. While schools, workplaces and shops were permitted to stay open, bars, restaurants and entertainment venues were ordered to shut.

Germany has registered more than 833,000 COVID-19 cases since the pandemic outbreak. The country is in the grips of a second wave of the coronavirus, with 17,561 new cases registered on Wednesday.