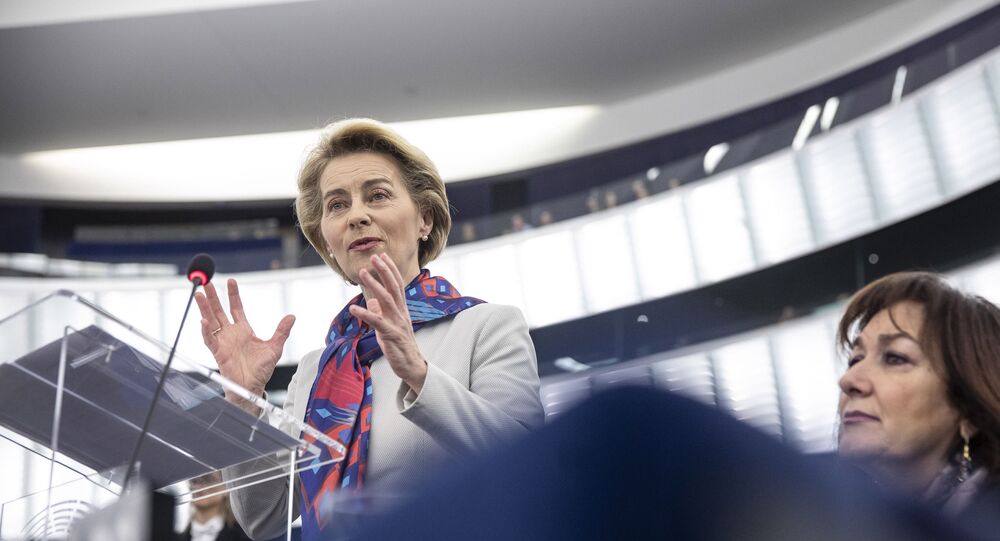 BRUSSELS, (Sputnik), Luc Rivet - The European Union has once again found itself at odds with its Eastern European members, Hungary and Poland, which earlier in the week hindered the bloc's COVID-19 recovery package in response to the EU linking the funds to the respect for rule of law.

On Monday, Warsaw and Budapest envoys declined to support the recovery fund of about 750 billion euros ($891 billion), as well as the multiannual budget for 2021-2027, at an EU ambassador meeting over a mechanism that restricts access to the money if a country's government violates certain rule of law criteria.

The two countries have warned on several occasions that they would refuse the package because of what they consider to be a political decision by Brussels, said to be aimed at punishing Hungary and Poland for their judicial reforms, as well as and to a lesser extent, for Budapest's refusal to accept foreign refugees and Warsaw's tightened control over state media.

According to Michel Liegeois, a political scientist at the ECLouvain university, the rule of law concerns have merit when it comes to special authority awarded to Hungarian Prime Minister Viktor Orban by the parliament in order to combat the spread of the COVID-19 pandemic.

"The devil is in the detail. It is therefore important to take an interest in their scope (broad or narrow, specific or general); their duration and the control mechanisms. On each of these aspects, the special powers in Hungarian fashion raise real concerns if we compare them with those taken in France or Belgium," Liegeois told Sputnik.

At the same time, it is important to not lose sight of the dispute's political dimension.

"The Left in the European Parliament wants to politically kill Viktor Orban in Hungary and the conservative majority in Poland. The charge was led by Frans Timmermans, the socialist Executive Vice-President of the European Commission, who was responsible for the ‘Rule of Law’ procedure in the last Commission ... Timmermans’ group in the European Parliament, the S&D (Socialists) but also the hard Left, the Greens, the Liberals of Renew are on the attack and made the allocation of European funds conditional to legal changes in Poland and Hungary," an anonymous Belgian civil servant involved in the negotiations told Sputnik, adding that this could divide the EU and push countries to take a page from the United Kingdom's book and leave the bloc.

Hungary and Poland Say No

The Committee of Permanent Representatives II (COREPER II), consisting of ambassadors of the 27 member states to the EU, gathered on Monday in Brussels with the hope of giving the green light to the provisional agreement on the Multiannual financial framework for 2021-2027, and on the other hand to the COVID-19 package.

The latter legally allows the European executive Ursula von der Leyen to borrow 750 billion euros on the capital markets to fuel the vast post-coronavirus recovery plan, called Next Generation EU. The text makes it possible to raise, temporarily in part, the ceilings of its own resources  — what the Union may require from the Member States to fund its budget, as a percentage of the gross national income — to cover all the EU's reimbursement commitments.

The decision on its own resources must, after formal adoption by the European Council, be ratified by the parliaments of the 27 member states, meaning the decision is very urgent.

However, Hungary and Poland followed through on their threats, blocking the process from continuing. If the budgetary framework is not adopted on time, this will have very concrete consequences on the financing of the various programs starting in January.

In line with the position communicated during the EU summit in July and in accordance with the veto power laid out in the EU treaties, the Hungarian government exercised its veto over the EU's budgetary legislative package.

"In Brussels today, they only view countries which let migrants in as those governed by the rule of law. Those who protect their borders cannot qualify as countries where rule of law prevails. Once this proposal gets adopted, there will be no more obstacles to tying member states' share of common funds to supporting migration and use financial means to blackmail countries which oppose migration," Orban said in a Wednesday statement.

"It is really an institutional, political enslavement, a radical limitation of sovereignty," he said, as quoted by the BBC.

Meanwhile, German Ambassador Michael Clauss, who presided over the Monday meeting, warned of a serious crisis if the budget and stimulus package are not passed in the near future.

In the European Parliament, the position of the leftist parties and of the liberal Renew Europe is clear: they want to deprive Hungary and Poland of any European funding. On the other hand, the conservatives and the populists of the Identity & Democracy political group are supportive of the two states. The large right-of-center group, the Group of the European People's Party (EPP Group) is left in the middle. This group, led by the German Manfred Weber, who is very close to German Chancellor Angela Merkel, is said to have divided loyalties, as Fidesz, the party of Viktor Orban, is a member of the group despite being suspended in 2019.

"If Viktor Orban and [Polish Deputy Prime Minister] Jaroslaw Kaczynski want to stop the use of these funds for everybody, then they will have to explain that to the millions of workers and business owners, the Mayors and students, the researchers and farmers that are counting on the support of these funds," Weber said in a statement.

"This is precisely the aim of the rule of law conditionality to ensure that the money reaches those in need and the funds are spent correctly. The EU budget is money from the citizens, for the citizens. If anything, the rule of law conditionality will ensure that every taxpayer’s money, including the Hungarian and Polish citizens’ taxes, is spent properly and where needed," Muresan said.

Now, the group, as well as the entire political class in Brussels, will have to find a way out of this crisis, making one wonder what will prevail — the desire to stick it to Eastern European leaders or the wish to pass the stimulus package as quickly as possible.