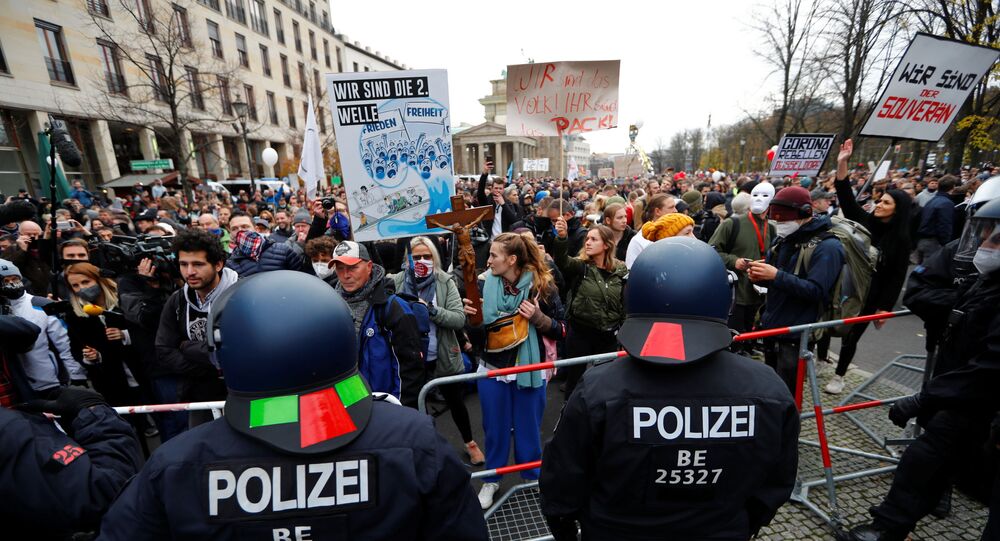 At the beginning of November, the German government introduced month-long restrictions aimed at curbing the spread of the infectious disease. Bars, restaurants and entertainment venues were closed, while workplaces, schools, and shops remain opened. This caused a wave of indignation among the public, which has boiled into protests across Germany.

The German parliament has adopted amendments to a law on protection against infections amid large-scale demonstrations against coronavirus restrictions. 415 legislators voted in favour of the amendments, 236 voted against, while 8 lawmakers abstained. The amendments will enhance the government’s power when it comes to coronavirus safety measures - mantaining social distance, wearing masks, closing shops, restaurants and other venues.

Protests have been going on in the capital Berlin since early morning, with police saying that between 5,000 and 10,000 demonstrators are taking part in the rally. The protesters called on lawmakers not to vote for the amendments, which they say infringe people’s rights. Some of demonstrators held placards reading "stop the pandemic lie" and "no to forced vaccination".

Police have used tear gas and water cannons to stop the demonstrators who tried to approach the parliament building. 190 protesters were detained during the protest in Berlin. According to police, the demonstrators violated coronavirus safety rules – they did not maintain social distancing and weren’t wearing masks.

Like other countries across the world, Germany has seen a wave protests against the government’s decision to introduce safety measures to stop the spread of the coronavirus. People opposing the safety rules believe that rules on social distancing, wearing masks, and the prohibition of public gatherings are unwarranted.

It is for this reason authorities decided to introduce amendments to the Infection Protection law, which will legally underpin the coronavirus restrictions introduced by the government.

Comparisons to Hitler and Enabling Act

The government’s proposal has caused concern among politicians and the public. People compared it to the Enabling Act, an amendment to the constitution that was passed in 1933 and gave Adolf Hitler and his National Socialist Party absolute power over Germany. Essentially, Hitler was able to issue laws without the consent of the parliament.

The protesters claimed that the amendments to the law in question will expand the powers of Chancellor Angela Merkel and her cabinet. The amendments approved by the parliament do transfer some powers from the legislative branch to the executive branch, the government. However, all of the coronavirus decrees issued by the government will be temporary and expire after four weeks.

Lawmakers from the Alternative for Deutschland party (AfD) have repeatedly claimed the amendments will give Merkel’s government dictatorial powers, drawing a parallel to the Enabling Act.

These comparisons prompted another debate on whether it is appropriate to compare the two.

Commenting on the Infection Protection Act, Andreas Wirsching, director of the Institute of Contemporary History in Munich, said that it is not a trivial matter when the government is given a legal basis to restrict some of the basic rights mentioned in the German constitution.

The comparison to the Enabling Act caused shock among some members of the Social Democratic Party (SPD), as back in 1933 members of the party were the only legislators who voted against Hitler's proposed amendment. Because of this, some MPs were persecuted and arrested.

"It must be possible to demonstrate and to criticise. But tolerance cannot go so far as to accept that the infection protection law is being equated with the beginning of the Nazi dictatorship, with the Enabling Act of 1933”, said Helge Lindh, a member of the SPD.