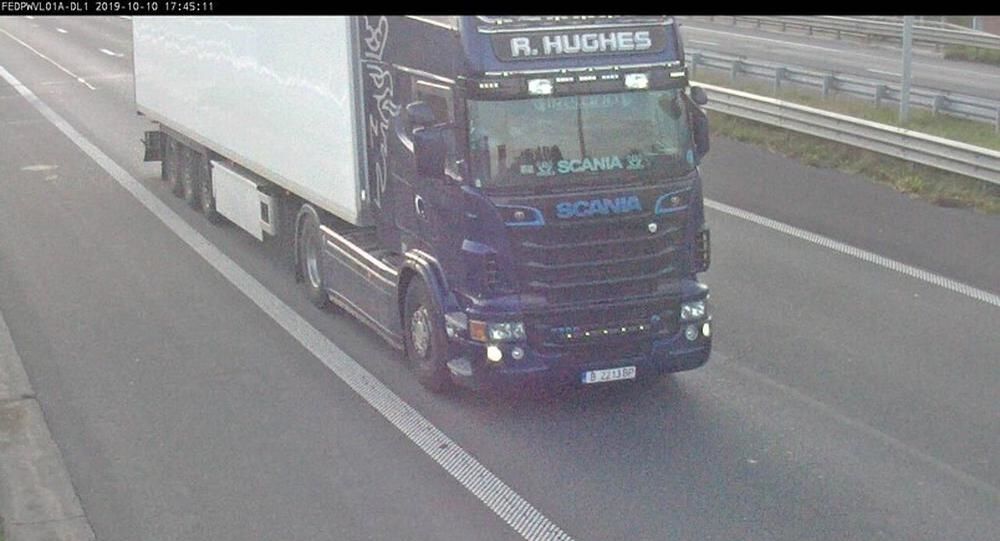 Trucker Who Picked up 39 Migrants Tells Jury He Was ‘Devastated’, Thought Cargo Was ‘Stolen Goods’

Four men are on trial in London in connection with the deaths of 39 Vietnamese migrants whose bodies were found in a lorry in England in October 2019. The refrigerated trailer unit in which they died had come over on a ferry from France.

A truck driver has said he was "devastated" when he learned 39 Vietnamese migrants had been found dead in the back of a refrigerated trailer unit he had deposited on a ferry in Belgium.

Giving evidence at the Old Bailey on Wednesday 18 November Eamonn Harrison, 23, of Mayobridge in Northern Ireland, insisted he had no idea there were people in the back of the trailer and said he thought he was delivering “stolen goods”.

​Harrison admits driving the lorry trailer to the Belgian port of Zeebrugge at 3pm, before it sailed to the Essex port of Purfleet, where it arrived just after 10pm.

The trailer was picked up around midnight by another driver, Maurice Robinson, who has already pleaded guilty to manslaughter, as has Ronan Hughes, the haulier who owned the lorry and employed both drivers.

When Robinson was asked by Hughes to give the migrants “some air” in the early hours of 23 October 2019 he found them dead. He rang the police, who found the victims - 10 of them teenagers, including two 15-year-old boys - who had died from lack of oxygen and overheating in the refrigerated trailer.

Harrison denies 39 counts of manslaughter and one count of conspiracy to assist unlawful immigration, along with Gheorge Nica, 43, of Basildon in Essex.

Harrison went into the witness box on Wednesday and his barrister, Alisdair Williamson QC, began by asking him how he felt when he heard about the deaths.

"Sh*te," he replied in a strong Northern Irish accent, adding he felt “devastated.”

Harrison said he had been working for Ronan Hughes for several years but in May 2019 he wrote off a lorry and its trailer in Germany while drunk.

​He said the insurance would not pay Hughes for the lorry or its load of Danish bacon, which was ruined.

Harrison said he avoided Hughes for a month - laying low in Spain - but eventually took a job with another haulage company.

Forced To Transport 'Stolen Goods' To Pay Off Debt

He said Hughes eventually found him and told him he would have to pay back the £30,000 he owed him.

Harrison said Hughes told him he wanted him to “load some stolen goods” and said by doing so he would help to pay off his debt.

"I wasn’t too happy about it but there was nothing I could do. I owed the man money," replied Harrison.

He said he was told to “ask no questions”, leave the lorry for 15 minutes and then come back and drive off.

On 10 October he picked up a Romanian man called Alex at West Thurrock Services near London and they headed to the continent.

Harrison said he made a delivery to Holland and spent the next 13 days in France and Belgium with Alex.

They drove several times to Nieppe Industrial Estate, near Lille, where he left the truck with Alex and walked away before returning and finding the lorry facing the other way.

He said he assumed the visit to Nieppe had to do with the "stolen goods" Hughes had mentioned.

On 22 October, at 10.30am, Harrison said he drove the lorry to Bierne in Belgium and met a mystery man who he had never met before. The man told him to reverse up to a warehouse and stay in his cab.

He said five minutes later the man gave him the thumbs up and he drove off, unaware that the migrants had just been loaded into the trailer.

Harrison also told the jury how he had complained to the UK Border Agency only a few days earlier about the frequency with which his lorry was being stopped at the port. He said he rang up and also complained by email.

Also on trial with Harrison and Nica are Valentin Calota, 37, of Birmingham, central England, and Christopher Kennedy, 24, of County Armagh, Northern Ireland, who deny being part of the people-smuggling conspiracy.

The trial, at the Old Bailey, continues.