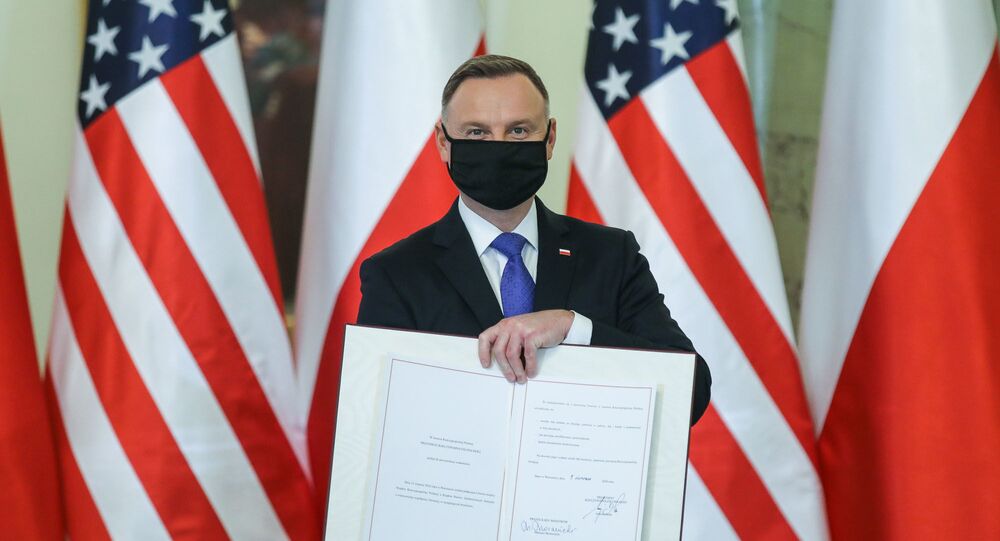 Polish President Andrzej Duda signed a new defense deal between Warsaw and Washington on Tuesday that will provide a legal framework for the stationing of thousands of US troops on Polish soil.

On Tuesday, Poland signed a deal with the United States that will provide for more than 1,000 additional US troops to be stationed on Polish soil, including the forward deployment of the US Army’s V Corps from Fort Knox, Kentucky, to Poznan, Poland.

That means at least 5,500 US troops will be in Poland at any one time, while the deal provides for the possibility of another 20,000 to be rushed to the Eastern European country in case of an emergency.

Some of those troops will be rebased from Germany after US President Donald Trump ordered some 9,600 troops redeployed in response to Berlin’s failure to increase its defense budget in compliance with its earlier pledge to match NATO’s spending goals.

"Everyone who is familiar with politics knows perfectly well that the conclusion of this agreement will not only bring military effects, it not only translates into the US military presence - personnel and infrastructure ... - It is primarily a guarantee of security for Poland and for the whole of this part of Europe," Duda said at the ceremony in the Presidential Palace in Warsaw.

The Enhanced Defense Cooperation Agreement (EDCA) had previously been approved by Polish Defense Minister Mariusz Blaszczak and US Secretary of State Mike Pompeo in August.

While the deal was drafted under the Trump administration and Duda even offered to name a new base “Fort Trump,” the conservative Polish president has indicated he is just as willing to work with the incoming Biden administration, even though Trump has not yet conceded the results of the November 3 US election.

“I believe that our partnership is above political divisions,” Duda said, according to the Associated Press. “We are waiting for the new US president to take office.”

Biden previously played a pivotal role in facilitating the US-backed coup d’etat in Ukraine in 2014, which threw out a nominally pro-Russian government and replaced it with a fanatically pro-NATO and pro-European Union group.

Poland is just one of several former members of the Soviet Union-led Warsaw Pact defensive alliance to have joined NATO in the years since the Warsaw Pact was dissolved and socialism in Eastern Europe overthrown. In Poland and the Baltic States, the US has signed Enhanced Forward Presence (EFP) deals allowing large numbers of US troops and equipment to be stationed and staged close to the Russian border after the nationalistic forces behind the coup in Ukraine forced Russian-speaking Crimea to secede and rejoin Russia, which the Western powers regarded as an illegal land grab by Moscow. More recently, US policy influencers in Washington have pushed for the US to sign an EFP deal with Romania as well.

Moscow has regarded NATO’s policy of expanding eastward as a direct threat and a violation of agreements made at the end of the Cold War designed to ensure a more neutral political era in the region.

White House Always Wins? Poland, Other Allies to Pay for All Expenses of US Troop Deployment

Poland Deludes Itself By Pretending to be 'Part of the West', Late Historian Says in Last Interview