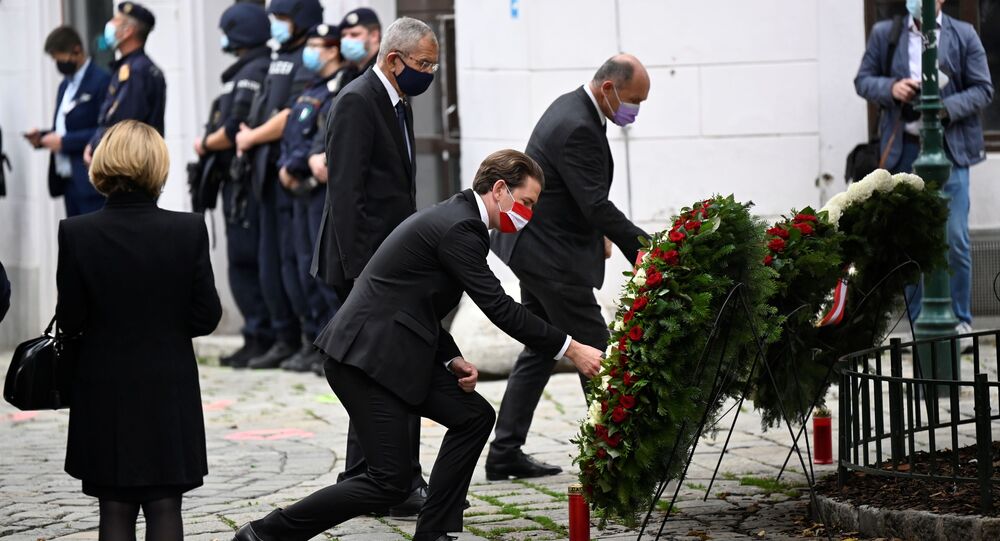 International Cooperation to Counter Terror Must Be Strengthened After Vienna Attack, Kurz Says

Europe has been hit by a series of brutal terrorist attacks over the past three weeks, prompting the authorities to ramp up counter-terrorist measures across the continent.

Austrian Chancellor Sebastian Kurz has said that international cooperation to counter terror must be strengthened after the Vienna attack, which left four people dead and at least 22 injured.

"Apart from investigation and preventive measures, the international cooperation is needed. Islamist terrorism is part of a single network across the world and carries the same danger everywhere. Europe is facing a common challenge and we can only respond together," Kurz said.

The situation with the early release of a potential terrorist, as in the case of the Vienna attacker, should not be repeated, Kurz noted, speaking before the Austrian National Council.

"I am grateful to the Ministers of Internal Affairs and Justice that they have started the relevant negotiations in order to jointly improve the system", he said.

Kurz continued by saying that Austria's Office for State Protection and Counterterrorism (BVT) needs to be reformed.

"In recent years, the department has suffered serious damage for various reasons. This damage must now be repaired," he stressed.

The statement comes after a series of shooting attacks that rocked downtown Vienna, with Austrian police taking out one of the assailants, reportedly a Daesh* supporter.

© Photo : DeshGujarat/twitter
Austrian Interior Minister: All Those Held in Connection to Vienna Attack Have Migration Background
The Vienna rampage came shortly after a series of terrorist attacks in France, which has heightened its security to the highest level. French President Emmanuel Macron said on 29 October that additional troops would be mobilised and security provisions at French schools and worship sites would be reinforced as the nation is faced with a terrorist threat emanating from radical Islamism.

Last week, a 21-year-old man from Tunisia killed three people in a church in the southern French city of Nice. Two weeks before that, a 17-year-old Muslim teen beheaded a Parisian teacher who showed caricatures of Islamic prophet Muhammad during a freedom of speech lesson.

*Daesh (IS/ISIL/ISIS) is a terrorist organisation banned in Russia and many other countries.