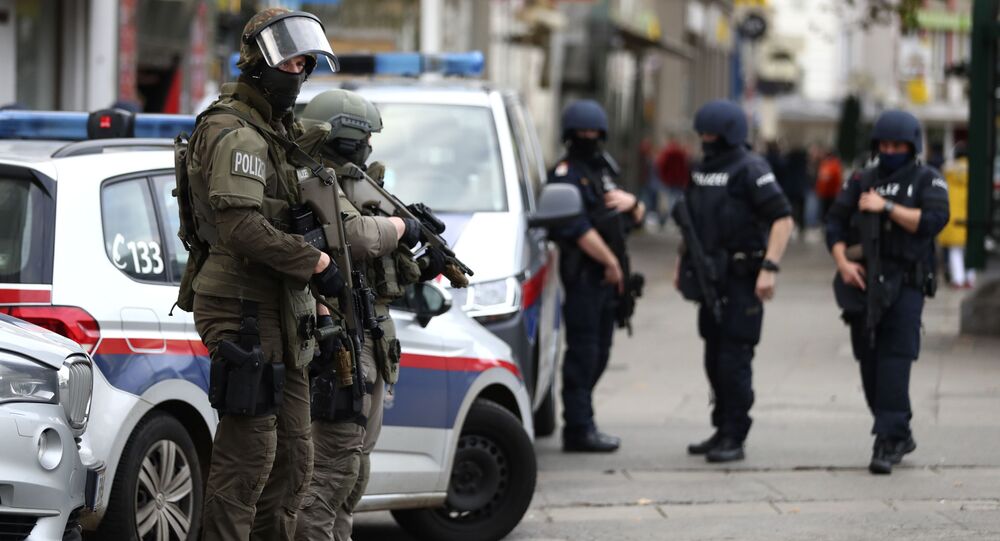 On Monday night, a 20-year-old gunman started a shooting and stabbing rampage in Austria’s capital, eventually claiming lives of at least four people and injuring dozens of others. It was later revealed that the suspect, who was shot dead by police, had earlier been sentenced to 22 months in prison for trying to enter Syria to join Daesh*.

The Vienna terrorist attacker, identified as 20-year-old dual Austrian-North Macedonian citizen Kujtim Feizulai, was prematurely released from a deradicalisation programme as he had misled his mentors, giving them the impression that he had given up on jihadist intentions, Austria’s Interior Minister Karl Nehammer said during a Tuesday press conference, as quoted by The Guardian.

In September 2018, Feizulai, born south of Vienna in the town of Mödling, sought to travel to Syria to join Daesh* terrorist forces. The attempt eventually failed and the man was deported from Turkey to Austria, where he was sentenced to 22 months in prison in April 2019. However, his sentence was shortened under the country’s juvenile laws. The man was released from custody in December 2019, with authorities apparently deeming him unlikely to carry out an attack. He retained his Austrian citizenship.

“The fact is that the terrorist managed to deceive the judicial system's deradicalisation programme,', Nehammer said during the conference, noting that there is “a fault line” in its functioning which allowed a “premature release of a radicalised person”.

According to the minister, Feizulai falsely expressed a readiness to be ready to re-integrate into Austrian society during the meetings with his mentors, while apparently remaining focused “on destroying the system”.

“We need to evaluate and optimise the system on the side of the judiciary,” the interior minister concluded.

According to the head of a Vienna-based Derad deradicalisation programme, Moussa Al-Hassan Diaw, which provides mentorship to individuals either sentenced for association with terrorists or suspected of being radicalised, the organisation has never described Feizulai as being completely non-threatening to society.

“Until a deradicalisation programme is stopped completely, there is always an element of risk,” Al-Hassan Diaw said, as quoted by the Guardian. He rejected reports that the programme had called for the man’s early release.

Derad is set to provide reports to authorities following bi-monthly meetings with individuals in question which are then for the court to review, and allow the country to monitor suspects deemed a risk to society beyond a prison sentence.

Following Feizulai’s Monday night shooting in central Vienna that took the lives of four people, including “an elderly man and elderly woman”, Daesh claimed responsibility for the attack through its media arm, Amaq, while calling the man a “soldier of the Caliphate”.

The attack was described by Austrian Chancellor Sebastian Kurz a “hideous terrorist” act and the latest episode in a “struggle between civilisation and barbarism”.

14 people were later detained in relation to the shooting spree during a police raid on 18 properties.