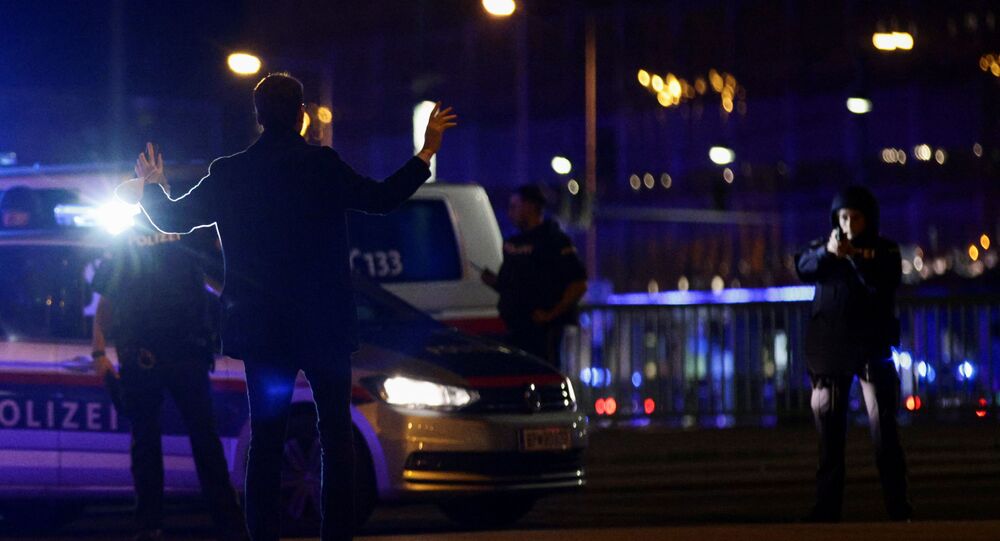 Late on Monday, the capital city of Austria was rocked by a terror attack, with multiple shots fired from six different locations, leaving at least 15 injured and at least one killed. Vowing to take "decisive action" against those responsible, Austrian Chancellor Sebastian Kurz named the rampage a "hideous terrorist attack".

In the wake of Monday's shooting in Vienna, that left the city's centre cordoned off amid a massive police operation, world leaders expressed condolences to Austria and condemned the attack.

With the European Council president one of the first to react, the PMs of the United Kingdom, Italy and Spain, along with Russian Foreign Ministry spokeswoman Maria Zakharova, joined an international move condemning the terrorist attack in Vienna.

"The Russian Embassy in Vienna is in contact with the Austrian competent teams to clarify the issue of civilian assistance during the terrorist attack. Our condolences to Austria!", Zakharova wrote on her Facebook page.

​Emmanuel Macron, the French president, tweeted that Austria is the next "friendly country that is under attack", after France, referring to the recent series of terror attacks in France, particularly those at the Notre Dame Basilica in Nice and the killing of teacher Samuel Paty.

"We, French, share the shock and sadness of the Austrians after an attack in Vienna. After France, it is a friendly country that is under attack. This is our Europe. Our enemies need to know who they are dealing with. We won't give in to anything", Macron tweeted.

​UK PM Boris Johnson expressed solidarity with the Austrian people, saying that he was "deeply shocked" to hear about the attack.

I am deeply shocked by the terrible attacks in Vienna tonight. The UK’s thoughts are with the people of Austria - we stand united with you against terror.

"Following the information that arrives from Vienna in a night of pain before a new senseless attack. Hate will not bend our societies. Europe will stand firm against terrorism. Our affection for the families of the victims and our solidarity with the Austrian people", his tweet read.

​Italy's Giuseppe Conte said there "must be no place for hatred and violence in our common European house", tweeting on the Vienna attack.

"Strong condemnation of the terrorist attack that struck Vienna this evening. There must be no place for hatred and violence in our common European house. Solidarity with the Austrian people, the relatives of the victims and the injured", he tweeted.

"The Secretary-General is following the evolving situation in the center of Vienna with grave concern, where violence has been reported in several locations today, killing at least one bystander and injuring several others, including security personnel", Dujarric said.

The executive director of the United Nations Office at Vienna, Ghada Waly, expressed condolences to those affected in the Vienna attack.

My heart goes out to the victims and all those affected by this horrific attack in our host city, we at the @UN in Vienna stand with the people of Austria at this tragic and difficult time.

​The Austrian capital saw the terror attack on late Monday, when multiple shots were fired near a synagogue, leaving at least 15 people injured and one killed. A massive police operation is underway as shooters remain at large, with the Austrian Chancellor Sebastian Kurz denouncing the shooting as "hideous terrorist attack".

Most Horrible Terror Attacks Vienna Faced in Past Decades