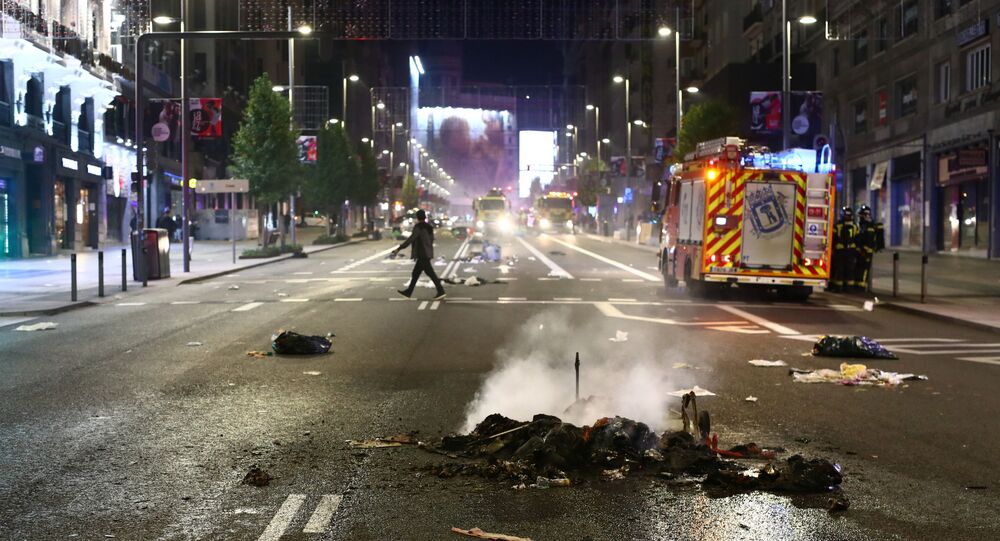 Anti-lockdown protests have swept through several of the biggest cities in Spain following the re-imposing of strict coronavirus measures amid the surge in COVID-19 infections.

Spanish Prime Minister Pedro Sanchez has called on citizens to demonstrate unity and responsibility in the fight against the COVID-19 pandemic, as anti-government protests have continued on Saturday.

"Only [with] responsibility, unity and sacrifice will we be able to defeat the pandemic that is devastating all countries. Violent and irrational behavior by minority groups is intolerable", Sanchez tweeted on late Saturday.

According to Catalan law enforcement, a group of protesters damaged a municipal building in the Gothic Quarter, set fires, threw stones at police, and damaged a police vehicle.

RTVE reported that some 150 protesters in Logrono threw stones at police officers, set dumpsters on fire and disrupted traffic. At least seven officers were injured and six people were detained as a result.

In central Madrid, a group of protesters erected barricades and set fires in a bid to block traffic, Europa Press reported. They were later dispersed by police.

Smaller cities such as Bilbao, Vitoria, Malaga and others also saw protests on Saturday evening.

On Friday, the rally against the coronavirus-linked quarantine in Barcelona resulted in clashes between protesters and police. Several groups of radicalised protesters were throwing smoke grenades, crackers and parts of fence at police officers, as well as building barricades and setting them on fire. The unrest spread to the Gothic Quarter. Two shops were looted and several vehicles were damaged.

On Thursday, the government of Catalonia announced the boosting of quarantine measures, including a 15-day ban on entering and leaving the region. People are also prohibited from moving between municipalities of Catalonia at weekends. Shopping centres, theatres, cinemas, cultural centres, sports facilities, bars and restaurants remain closed.