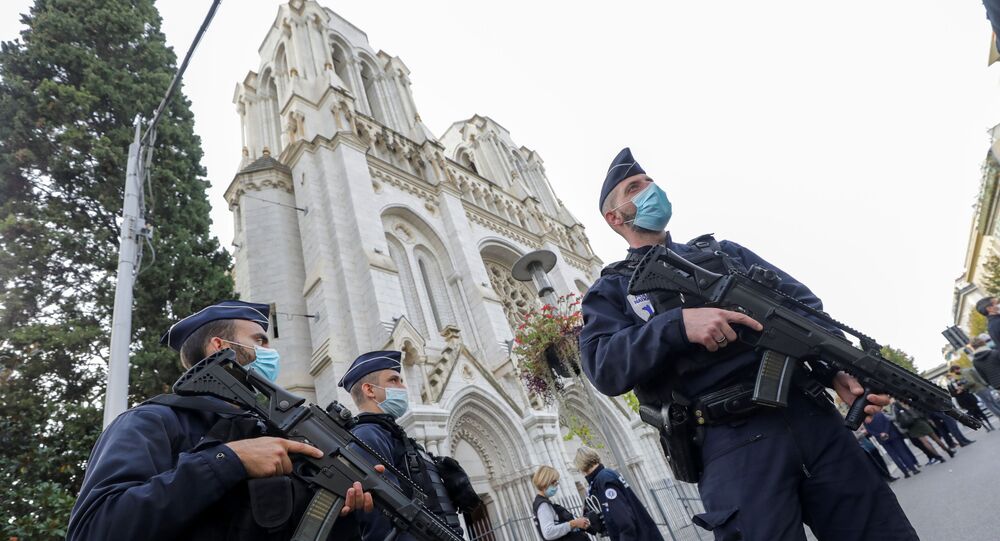 Ex-Mossad Spy: Terror May Be Unstoppable But France Has Awoken From 'Virus of Political Correctness'

It is almost impossible to eradicate the lone-wolf terror attacks currently sweeping France, thinks a former Mossad operative, simply because it is extremely tough to penetrate the minds of thousands of radicals across the nation and track them down.

Another brutal attack in France has left three people dead, following a knife-wielding terrorist killing three worshippers at the Notre Dame church in Nice on Thursday.

The city's mayor Christian Estrosi has already called the attack an "act of terror" and France has raised its national security alert system to the highest level.

The attack did not come as a surprise to Gad Shimron, a security commentator and former Mossad (Israel's spy agency) operative.

As somebody who has been dealing with security threats for years, he says France has a long history of attacks against civilian and sometimes military targets.

The country's history of terrorist violence dates back to the late 19th century when anarchists committed bombings in the capital and even assassinated a French president.

© REUTERS / TWITTER / @CESTROSI
What Does France’s Highest ‘Attack Emergency’ Security Alert Level Mean in Wake of Nice Stabbing?
In the 20th century, during France's involvement in Algeria, the Front de la Liberation Nationale (FLN) attacked French targets on the mainland and in North Africa in the name of their self-determination.

Now, however, terror has changed its form, taking the shape of Islamic radicalism, the roots of which can be traced back to the end of the 1960s, when France opened its doors to immigration from the nation's former colonies in North Africa.

Back then, thousands of people moved to the French Republic in search of jobs and better opportunities. Many managed to integrate into French society, but the majority suffered from inequality and discrimination, something that pushed the younger generation to extremism.

"What we're seeing these days is a wave of so-called lone-wolf attacks. It's extremely tough to fight them because even the world's best security agencies cannot penetrate the mind of every Muslim extremist in France. And that is also the reason why we will see more of them taking place".

In a country where ten percent of the population is Muslim and where radical ideas are often dispersed in mosques, sports, and cultural centres across the nation, that prediction is alarming.

In a bid to stop the spread of the phenomenon, the French authorities have already started to clamp down on radical mosques and other Muslim institutions that they believe are the hub of extremism, but Shimron is doubtful these or other actions will lead to a victory over terror.

"The French authorities cannot react too radically to the situation and decide to shut down all the mosques in the country", he says, referring to the potential electoral power of Muslim voters. "That's why, the French authorities need to walk on egg shells and invest great efforts into human and electronic intelligence to prevent such acts from happening".

© REUTERS / ERIC GAILLARD
Nice Attack: Terrorism Won't be Thwarted Until International Community Come Together, Observers Say
France has already taken the necessary steps in that direction. Its security agency, the DGSE, whose job involves monitoring Islamic groups, has an annual budget of more than $830 million, and in 2015, following a series of deadly attacks on the French Republic, the country boosted its intelligence sharing with a number of European countries as well as Israel in a bid to spot those, who dare to challenge the nation's security.

But Shimron believes France cannot really learn from the experience of Israel, who has been relatively successful in tackling its own security threats, due to the very "different nature of the two states' circumstances".

Instead, he suggests that France should be investing greater resources into tracking and mapping those, who pose a potential danger and looking into the eyes of extremism, without sticking their head in the sand.

"France and the entire world are waking up. In 2015 [during the wave of terror attacks - ed.] Paris was cautious about calling those assaults Islamic terror. Now it is changing. The virus of political correctness is gone and people are no longer shy to spell it out".