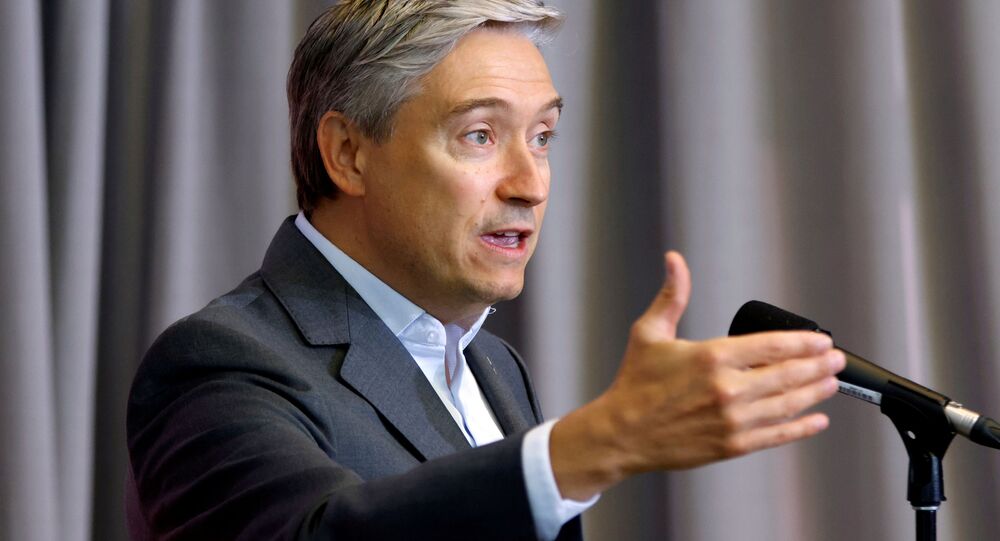 MOSCOW (Sputnik) - Canada’s Foreign Minister Francois-Philippe Champagne has called Ankara’s statements with regard to France "unacceptable" while urging a return to respectful dialogue amid increased tensions between Paris and Turkey.

Champagne wrote on Twitter on Monday that "We stand in solidarity with our French friends".

We stand in solidarity with our French friends.

Turkey’s recent comments about France are totally unacceptable. We must return to respectful diplomatic exchanges.

We will always stand together to defend freedom of expression with respect. @JY_LeDrian

© REUTERS / LUCIEN LIBERT
Paris Urges Muslim Countries to Stop Boycott of French Products
Franck Riester, France’s Minister Delegate for Foreign Trade and Economic Attractiveness, said on Monday that France had no intention to restrict imports of Turkish goods following Erdogan’s calls for a boycott. A number of other Muslim countries have also called for such a boycott.

On Sunday, Paris condemned Ankara’s strongly worded reaction to Macron's statement against radical Islam and recalled its ambassador from Turkey for consultations.

On October 21, Macron delivered a speech during a commemoration ceremony for French history teacher Samuel Paty, who was brutally murdered by a radicalized teen. The president called for his country to "free Islam in France from foreign influence and strengthen control over the funding of mosques," and stressed that France would continue to defend freedom of expression and step up the battle against radical Islam.

On Saturday, Erdogan said that the French president disrespected millions of French Muslim citizens and "needed mental treatment." He added that the "manifestation of hostility to Islam means hostility to Turkey."

Macron said on Twitter on Sunday that "we will not give in, ever," adding, nonetheless, that France respected "all differences in a spirit of peace" but hate speech was unacceptable.

We will not give in, ever.
We respect all differences in a spirit of peace. We do not accept hate speech and defend reasonable debate. We will always be on the side of human dignity and universal values.