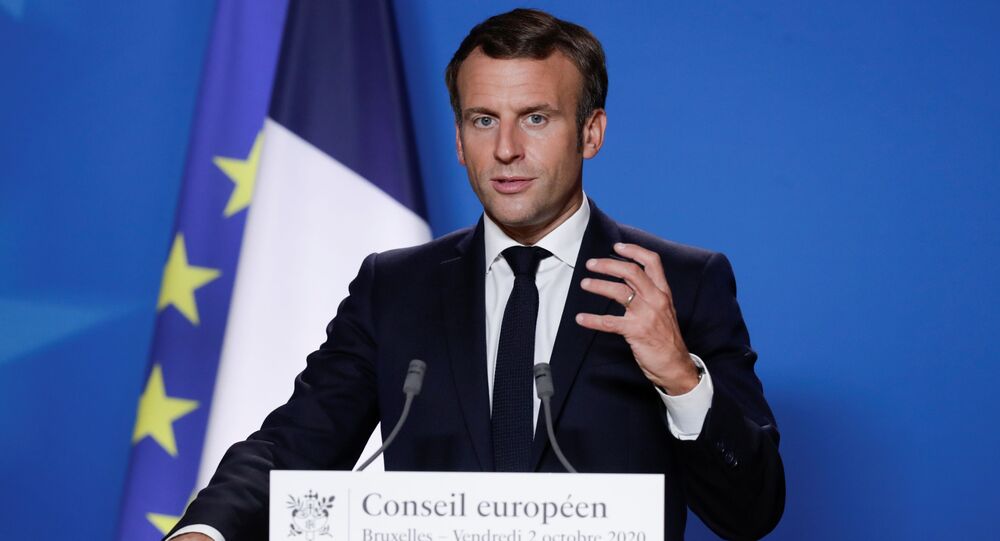 Macron previously stated that Paris would stay strong against the Islamist threat after a schoolteacher was gruesomely decapitated by an 18-year old immigrant for showing caricatures depicting the Islamic Prophet Muhammad to his students.

Paris on Saturday lashed out at Turkish President Recep Tayyip Erdogan for criticising his French counterpart for his policies toward Muslims and saying that Emmanuel Macron has to have “mental checks”.

In the wake of the teacher's murder in Paris, the French head of state promised to impose better control over foreign funding of mosques and schools. He also described Islam as a religion "in crisis" worldwide and noted that the government will impose stricter secular policies.

© AP Photo / Michael Sohn
German Chancellor Angela Merkel, front second left, waits for the arrival of leaders prior to a group photo at a conference on Libya at the chancellery in Berlin, Germany, Sunday, Jan. 19, 2020.

Last week, France was shaken when Samuel Paty was beheaded by an 18-year-old man of Chechen origin in a Paris suburb after he showed cartoons of the Prophet Mohammad to his students. The suspect was shot dead by police officers the same day. An investigation into the fatal incident is underway.

Following the murder, a draft law seeking to prohibit the justification of a crime due to ethnic or religious motives on constitutional grounds, was passed to the French Senate. Addressing the bill, Erdogan said that "the main goal of such initiatives led by Macron is to settle old scores with Islam and Muslims".