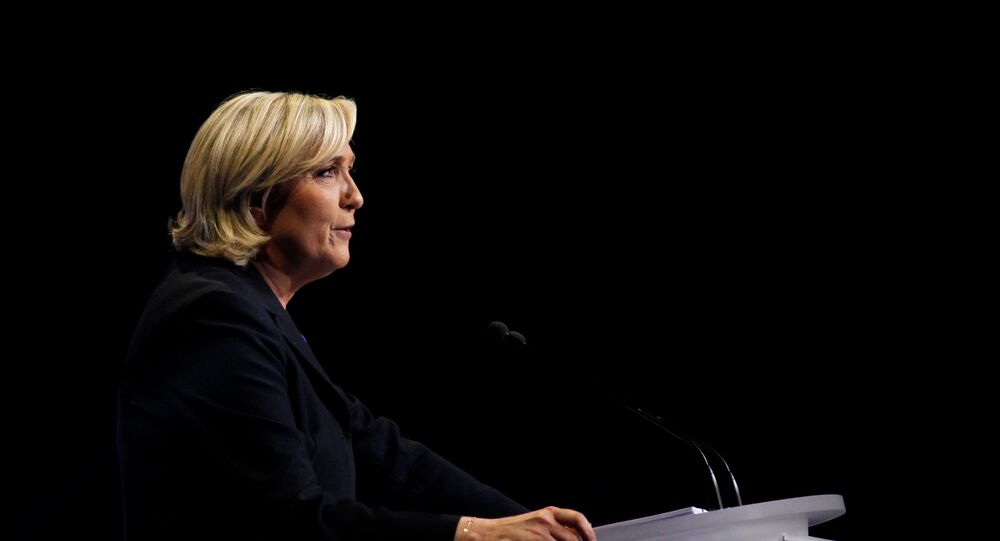 MOSCOW (Sputnik) - A little over a third of French citizens believe that Marine Le Pen, the leader of the French National Rally party, offers effective ways of curbing the Islamist threat. Her recent statements came amid national unrest over a brutal attack on a teacher.

According to a recent poll for RTL and Orange released on Friday, 31 percent of the respondents viewed Le Pen's suggestions vis-a-vis battling terrorist threats as relevant and effective. However, her confidence rates over the matter is still lower than that of French President Emmanuel Macron, her likely opponent in 2022 presidential elections.

The survey also found that 26 percent of those polled consider voting for Le Pen as the head of the country.

© REUTERS / ERIC GAILLARD
France Reviews Expulsion of Foreigners Posing National Security Threat in Wake of Teacher's Murder
Marine Le Pen recently stressed the importance of the expulsion of foreigners promoting radical separatism. She also suggested it was necessary to set up a commission of inquiry to investigate those responsible for failures of state agents to protect the murdered teacher. Separately, she called for legislation against radical Islamism and the implementation of a moratorium on immigration and naturalisation.

Le Pen's outspoken comments came after French history teacher Samuel Paty was beheaded by an 18-year-old teenager of Chechen origin outside Paris after showing cartoons of prophet Mohammad to his students, which caused anger among Muslim parents. The killing greatly stirred the nation, prompting widespread dismay over the rising "Islamist threat". Amid the national grief, Le Pen urged the authorities to expel foreigners advocating radical Islamism from France and strip them of their French citizenship.