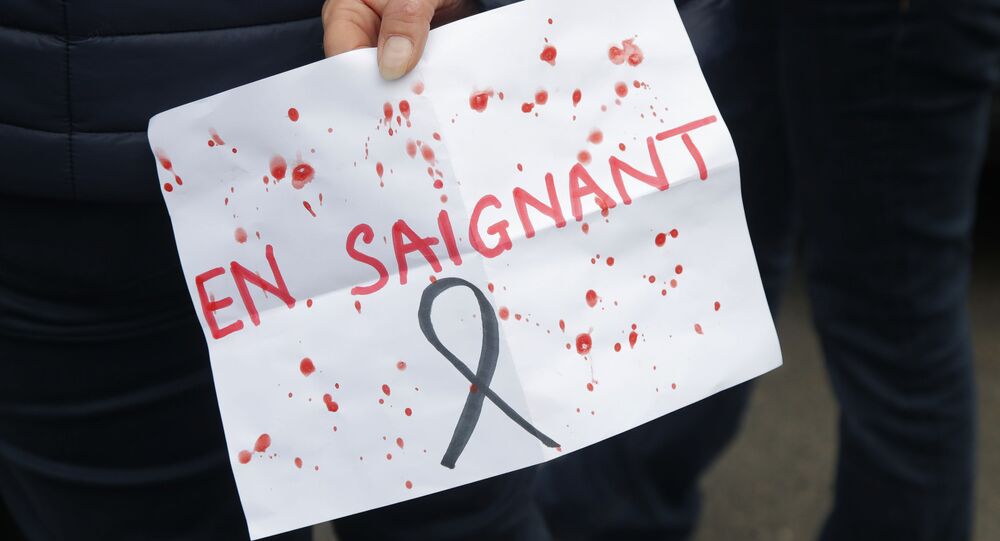 On 16 October, France was shaken by the gruesome beheading of 47-year-old Paris teacher Samuel Paty, who is thought to have been killed for showing a caricature of the prophet Muhammad to his students. An 18-year-old immigrant of Chechen origin who was the principal suspect in the murder was shot and killed by police during an arrest attempt.

A graphic "cutout photo" of decapitated French teacher was published in the latest issue of an online magazine allegedly run by Daesh* supporters in India, with terrorists threatening to attack everyone engaged in blasphemy against Prophet Mohammed, according to Homeland Security Today.

The outlet in question reportedly accompanied the pic of the victim's severed head, which is said to have been originally shared by the teacher’s murderer on his social media, with an image of a sword and the following message:

Earlier, the same magazine reportedly called upon its readers to emulate 2015 Charlie Hebdo mass shooting attack which saw 12 people dead and 11 others injured.

Daesh did not claim responsibility of the killing of Samuel Paty, a teacher from Conflans-Sainte-Honorine school in the northwest of Paris, who was beheaded on 16 October by 18-year-old Muslim of Chechen origin Aboulakh Anzorov. His family arrived to France amid ongoing anti-terrorist operation in Russia's North Caucasian which includes the Chechen Republic in the early 2000s and eventually had received refugee status. When he turned 18, Anzorov automatically became a resident of the country.

It is believed that the attack was inspired by Paty’s freedom of speech class, where he had shown cartoons of Islam’s Prophet Mohammed. His action was heavily criticised by some Muslim parents; the father of one of the girls eventually launched an online campaign against the teacher. French police said that the man and one Islamist preacher have issued a “fatwa” against him.

Anzorov, it is said, did not have any links to school where Paty was teaching. However, he had reportedly travelled from the Normandy town of Évreux to the educational facility where he had asked students, allegedly in exchange for money, to identify the man. Eventually, he had followed Paty home to then stab him to death.

The killer was eliminated during a standoff with police after he refused to surrender.

His four relatives, along with the father of the girl who launched the damning online campaign, as well as one Islamist preacher and students who allegedly accepted the money to help Anzorov find the teacher, have all now been arrested in relation to the murder. It is believed that the children in custody were not aware of Anzorov's terrorist plans.

*Daesh [ISIL, ISIS, the Islamic State] - a terrorist group banned in Russia and many other countries.