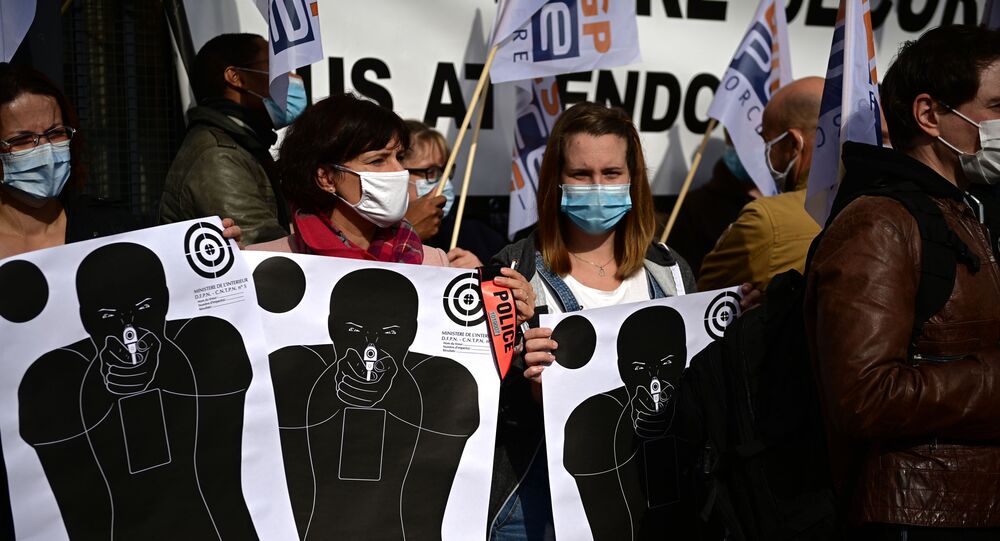 MOSCOW (Sputnik) - French Interior Minister Gerald Darmanin on Tuesday expressed support to police departments across the country, which have been subjected to a series of attacks in recent weeks, including one on a police station with fireworks on Sunday and a shooting on Wednesday that left two policemen injured.

"I want to reiterate all my feelings of comfort, support and courage to law enforcement, who have recently experienced very shocking assaults. I will receive this afternoon the unions of the @Policenationale [National Police] and the President of the Republic [Emmanuel Macron] will receive them this Thursday," Darmanin tweeted.

Two policemen in disguise were shot last Wednesday in Paris' northwest suburb of Herblay by three individuals, one of whom surrendered to law enforcement officers last Friday. While the condition of the police officer who sustained the worst injuries is stable, he remains in a coma. The suspect for the attack was questioned by prosecutors.

The Sunday assault by an armed mob in the Paris suburb of Champigny-Sur-Marne included some 40 perpetrators who attacked the police unit with fireworks and metal bars. There were no casualties but police officers were incited to gather in Paris to protest over the lack of security while performing their duties.

The attacks come following a summer uptick in worldwide protests against police brutality and racism that started in the US, where African American man George Floyd was killed while in police custody in the city of Minneapolis on 25 May. France has also been among the countries rocked by mass demonstrations in major cities, evoking, in particular, the controversial death of a 24-year-old Malian-French man, Adama Traore, who was apprehended by police in a manner similar to Floyd before dying.