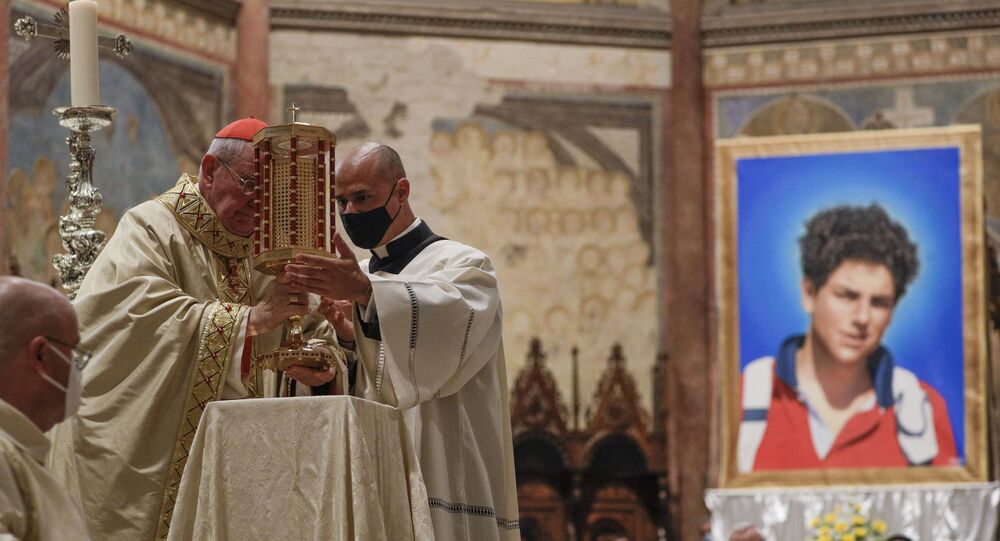 While at least one more verified miracle is required for Carlo Acutis to become canonised, Pope Francis has reportedly “waived that on rare occasions”.

A beatification ceremony for an Italian teenager named Carlo Acutis, who passed away at the age of 15 from leukemia in 2006, was held on 10 October in the town of Assisi where he is interred.

According to AP, Acutis became the "youngest contemporary person" to be beatified, with the media outlet describing this development as Carlo moving "a step closer to possible sainthood".

Having taught himself to code while in elementary school, Acutis, who is already reportedly being touted as "patron saint of the internet", created a "website to catalogue miracles" and "took care of websites for some local Catholic organisations".

During the ceremony, which was held at the Basilica of Saint Francis of Assisi, Cardinal Agostino Vallini, the papal legate for the Assisi basilicas, kissed the boy's mask-wearing parents after reading the proclamation decreed by Pope Francis.

BLESSED Carlo Acutis, patron of the Internet, pray for us! pic.twitter.com/KqTCdOKytv

"Carlo used the internet in service of the Gospel, to reach as many people as possible," the cardinal said during his homily, adding that Acutis saw the web "as a place to use with responsibility, without becoming enslaved".

Acutis' path to sainthood started when Pope Francis approved a miracle attributed to the former, "the healing of a 7-year-old Brazilian boy from a rare pancreatic disorder after coming into contact with an Acutis relic, a piece of one of his T-shirts".

And while at least one more verified miracle is required for Acutis to become canonised, AP points out that Pope Francis "has waived that on rare occasions".