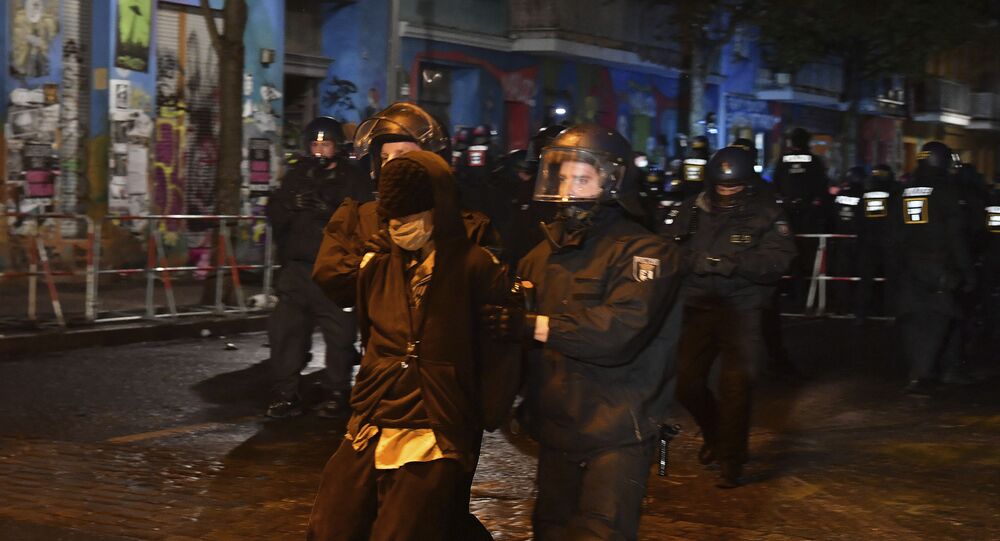 People have been rallying in Berlin to protest the eviction of an ideologically-based collective housing project known as the 'Liebig34 squat', which has been based in the city’s Friedrichshain district since 1990, soon after the demolition of the Berlin wall.

Dozens of police officers were called in to take action against the self-proclaimed “anarcha-queer-feminist” commune after they barricaded themselves inside an apartment block in Berlin's Friedrichshain district.

Hundreds of people have gathered in #Liebig34 in Berlin to defend a building occupied by anarcho-queer-feminists that police has planned to evacuate this morning. Safe to say that antifas & police have a long history of stand offs in this Berlin suburb.
More to follow on @dwnews pic.twitter.com/FJWGtIYDkO

Following a brief altercation, officers broke into the complex via a balcony, according to local media, as an armoured vehicle was seen parked in close proximity to the building, with a police unit standing on the roof. Electricity and water had been cut off in the complex to facilitate a "forced eviction" of the commune activists, who, law enforcement stated, initially refused to leave the premises voluntarily.

After some time had passed, punctuated by brief clashes between the black-clad, largely masked protesters and Berlin police, the activists tweeted that people were being "gradually dragged out of the house."

One of the videos posted on social media shows an officer escorting a person out of the building, after police dispersed a group of protesters in the street.

The building, known as the Liebig 34 squat, and adorned with a variety of  graffiti patterns and flags, was home to the "anarcha-queer-feminist house project," or “squat”, as indicated by their social media account. "You will never evict queer feminism," the activists posted online, as officers raided  the building.

Previous protests last week drew thousands of Berliners, rallying against the decision to evict the project, which has been in the Friedrichshain district of the German capital since 1990. In June, a regional court granted the owner of the apartment building an eviction permission, confirming the order on 15 September.