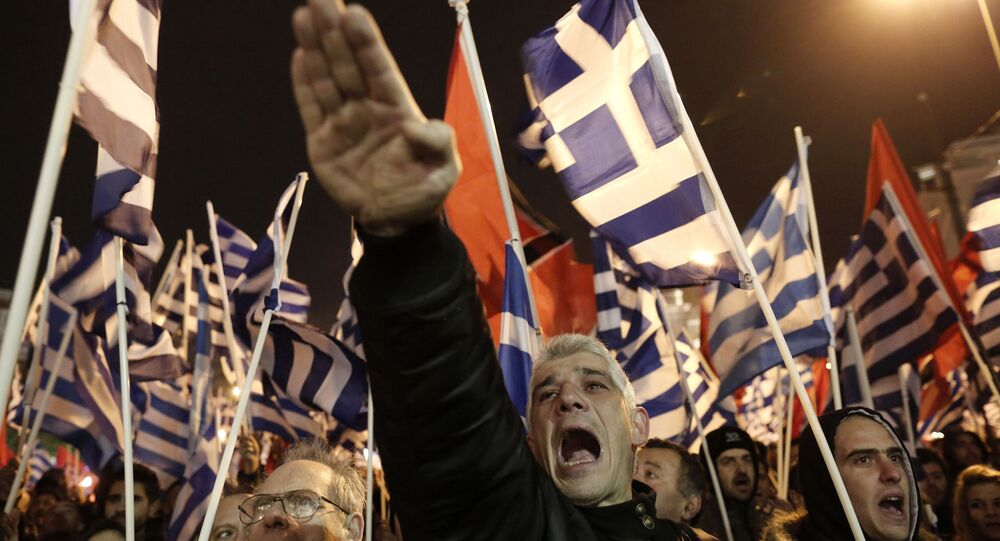 Golden Dawn was founded in the mid-1980s by Nikos Michaloliakos, a former army cadet. He formed the right-wing nationalist group after meeting George Papadopoulos, the former leader of Greek's military junta, in prison.

A court in Athens has ruled the right-wing political party Golden Dawn was operating as a criminal organisation, bringing to an end a high-profile trial which has run for five years.

There was applause in the courtroom on Wednesday, 7 October, as the presiding judge, Maria Lepenioti, read the verdict in which Golden Dawn member Yiorgos Roupakias was found guilty of the murder of left-wing rapper Pavlos Fyssas in 2013.

​Around 2,000 police were deployed in and around the courthouse and a drone and a police helicopter circulated overhead as a crowd of around 15,000 massed outside to wait for the verdicts.

Police used tear gas and a water cannon to disperse some demonstrators who threw petrol bombs.

Stand in solidarity with those fighting Golden Dawn, fascism and the far-right in Greece.https://t.co/wN2YBJYtC2 pic.twitter.com/wK4DYd8zwq

​Golden Dawn leader Nikos Michaloliakos, 62, and 17 other former MPs face between five and 15 years in prison.

Only 11 of the 68 defendants were present in the courtroom.

The trial was sparked by the September 2013 murder of Fyssas, 34, who was chased down by a mob of Golden Dawn supporters and stabbed to death in front of a cafe in the suburb of Keratsini.

Fyssas - who was known by the stage name Killah - was a well-known rapper who was affiliated with the Antarsya (Front of the Greek Anticapitalist Left) movement.

His mother, Magda, clapped as the guilty verdict was read out.

Some rare good news - fascists in Greece have been found guilty of the murder of Pavlos Fyssas and a number of other racially motivated crimes - solidarity to all comrades in Greece - ¡No Pasaran! https://t.co/IqRfEHHwSZ pic.twitter.com/jUYkwS1vyp

​Golden Dawn - which lost 18 seats at last year's general election and fell to 2.9 percent of the national vote - denied any direct link to the attacks and described the trial as an "unprecedented conspiracy'' aimed at undermining its popularity.

Golden Dawn (Chryssi Avghi) pushed a nationalist "Greece belongs to Greeks" agenda and were virulently opposed to giving sanctuary to migrants from Asia or Africa. At their peak in May 2012 they got seven percent of the vote and won 21 seats in the Greek parliament.