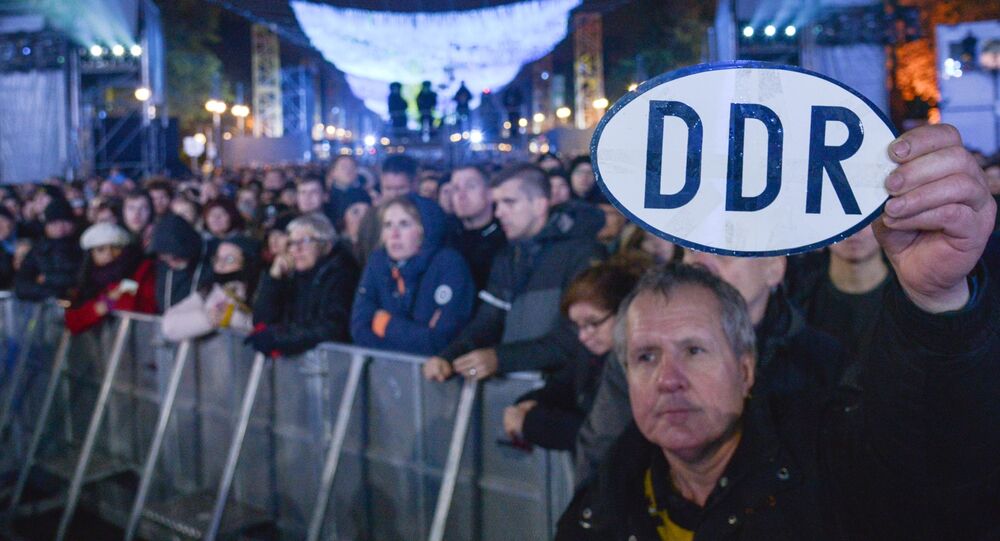 Saturday marks the 30th anniversary of the German Democratic Republic’s incorporation into the Federal Republic of Germany, with the event becoming a key landmark in ending the Cold War.

The West’s triumphalist attitude after East and West Germany were reunified was a major mistake for which the world is continuing to pay, Gregor Gysi, president of the Party of the European Left, and prominent politician from the Die Linke (The Left) party in the Bundestag, has suggested.

“The West could not stop winning, and assumed that everything would continue as it had before. This was a serious mistake, the consequences of which are seen to this day,” Gysi said, speaking to Sputnik on the occasion of the anniversary of Germany’s reunification.

At the stroke of midnight on 3 October 1990, in accordance with the treaty on unification signed in August of that year, the German Democratic Republic ceased to exist, with its territories incorporated into the Federal Republic. Reunification was preceded by the so-called "Two Plus Four Agreement" negotiated and signed by the FRG and the GDR, plus the four powers which had occupied Germany since the end of the Second World War: the Soviet Union, the United States, the United Kingdom, and France. The latter document paved the way for unification.

According to Gysi, one example of the West’s triumphalism in the post-Cold War era was the continued presence of US forces in Germany long after Russia withdrew its troops in 1994.

“The USSR was ready to withdraw its troops, and the US, France and the UK similarly agreed to remove their forces. However, in the case of the US, the promise was mere tokenism, because many troops, as well as nuclear weapons, would remain on German territory,” Gysi said.

“The only thing that they promised was that the troops of the [NATO alliance] would not be based in eastern Germany, that is, in the former GDR. But that too hasn’t happened to this day,” Gysi noted, adding that NATO troops have also been deployed even further east and right up to Russia’s borders.

In 1990, US Secretary of State James Baker famously promised Soviet leader Mikhail Gorbachev that NATO would not move “one inch eastward” of a reunified Germany. Since then, between 1999 and 2004, every single member of the former Soviet-led Warsaw Pact bloc, plus the Baltic republics of the former USSR itself, and several republics of the former Yugoslavia, were incorporated into NATO.

‘Nobody Would Have Fought WWIII for East Germany’

© CC BY 3.0 / San Jose / Cold War Europe military alliances map
Former Soviet Leader Gorbachev Responds to Claim That He ‘Surrendered’ Eastern Europe to West
Gysi emphasised that without Moscow’s consent, reunification would have been impossible, “because no one would have fought World War III for the sake of the GDR. In this regard, it was crucial that Gorbachev supported reunification.”

From Triumphalism to Trumpism

In July 2020, Pentagon chief Mark Esper announced that the US would be withdrawing nearly 12,000 troops from Germany, leaving about 25,000 troops in the country. About half the troops which are withdrawn will be sent back home to the United States, with the rest redeployed elsewhere in Europe. The headquarters of US Forces in Europe will also be moved from Germany to the Belgian city of Mons.

Commenting on this development, Gysi suggested that President Donald Trump “formulated this move as a punishment for Germany,” in response to Berlin’s slow response to US demands to increase its military spending. “I have said that I would like to see more such ‘punishments’. He can withdraw all US troops, and above all, US nuclear weapons. Because Trump has also talked about the creation of small nuclear bombs capable of being dropped on one country without causing damage to neighbouring nations. Let’s imagine that such bombs are directed against Russia. In such a case Russia would have to destroy the nuclear weapons stationed in Germany, and that means that the deployment of nuclear weapons does not make Germany any safer.”

Unfortunately, the lawmaker noted, today in Germany many policymakers continue to engage in Cold War thinking, “and don’t understand that here we have a different situation, and that it’s not in the interests of our security to increase the presence of American troops and nuclear weapons.”

Gysi noted that even 30 years after reunification, many problems remain as far as integration of the former East Germany into the FRG is concerned.

“The GDR’s leadership tried and failed in its attempt to create in people a sense of awareness of themselves as citizens of the GDR. But where they failed, the FRG succeeded. That is, eastern Germans today have a sense of self-identification as East Germans, and they have much more confidence in this sense than they had 30 years ago,” the politician suggested.

© AP Photo / Markus Schreiber
In this Tuesday, Feb. 22, 2019 photo, a Lenin monument stands in front of the abandoned "Haus der Offiziere", the headquarters for the Soviets' military high command in former East Germany, at the Wuensdorf neighborhood of Zossen, some 40 kilometers (25 miles) south of Berlin
© AP Photo / Karsten Thielker
East German Regions Back Readmission of Russia to G7 Despite Federal Government's Opposition
This special "self-awareness" among people in the former East has a political impact today, Gysi noted, pointing out that, unlike many Germans in the West, a majority of those from the East have disassociated themselves from anti-Russian sentiments. “There are exceptions, of course, but most do not accept such attitudes… A position of condemnation of and arrogance toward Russia is well received in the West, but not so well in the East. This is because, among other things, people in western and eastern Germany feel and think differently.”

Born in East Berlin, Gysi became involved in politics in the late 1980s in the reformist wing of East Germany’s ruling Socialist Unity Party. Before that, he worked as a lawyer, and defended multiple prominent dissidents and opposition figures. After reunification, he helped transform the party into the Party of Democratic Socialism, which merged with another democratic socialist party in 2007 to create the modern-day The Left (Die Linke), which has 69 seats in the Bundestag’s 709 seat parliament.

'The Russians Are Coming': How East Germans Met Soviet Soldiers in 1945