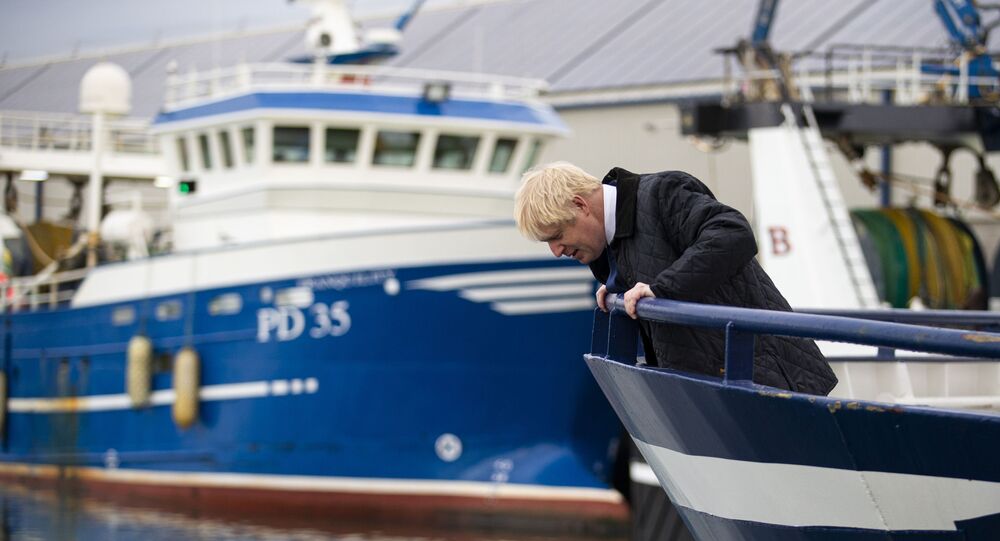 After UK trade talks with the EU reached deadlock on several contentious issues such as fishing rights, Britain signed a fisheries framework agreement with Norway on 30 September, hailed by German Chancellor Angela Merkel as an indication the country is on a “constructive path”.

Prime Minister Boris Johnson is reportedly hoping to pressure French President Emmanuel Macron to concede to UK demands regarding fishing rights as the price for a post-Brexit trade and security deal with the EU at a crunch meeting with the European commission president Ursula von der Leyen on Saturday, reports The Guardian.

Johnson is believed to have been buoyed by remarks made by German Chancellor Angela Merkel on Friday.

Merkel hailed the framework fisheries deal struck by Britain with Norway on 30 September - its first with another country since exiting the EU and becoming fully independent - as a “constructive indicator”.

“The agreement with Norway is at least an indication that [the British] are on a constructive path and I wouldn’t interpret that as bad news for us but rather as sign that agreements can be found,” Merkel said at a press conference after a summit of EU leaders in Brussels.

In hammering out a post-Brexit deal with the bloc, the UK is hoping to follow in the footsteps of Norway, a non-EU member state, which annually holds negotiations with Brussels on fishing quotas.

Johnson is set to “take stock of negotiations and discuss next steps” in a conversation with Von der Leyen on Saturday afternoon in a video-conference call.

Trade discussions remain deadlocked on key areas, as the ninth round of talks broke up in Brussels amid commitments to seek a way out of the impasse.

British and EU negotiators have set a European summit on 15 October as the latest deadline for an agreement to be reached if there is any hope for it to be ratified in time for it to take effect by the end of December.

After a meeting of leaders of the 27-member bloc, Von der Leyen warned against a deal with the UK "at any price", saying:

"This is so difficult, but overall where there is a will there is a way. I think we should intensify the negotiations."

Von der Leyen underscored that contentious issues such as fisheries and the control of domestic subsidies remained “completely open”.

Earlier, French President Emmanuel Macron adopted a particularly tough position on the issue of fisheries, demanding that EU fishermen continue to be given access to British waters and urging Brussels to favour the status quo, under which fishing catches in the reference period between 1973 and 1978 form the basis of today’s catches.

The UK rejects any deal that might resemble the status quo, and is pushing for not so much a “long-term solution”, as rather annual discussions with the EU over quotas.

Catch quotas would be detailed in line with that percentage. Lack of an annual deal on catches could result in EU fleets being “locked out” of UK waters.

Amid the tussle over the issue, some EU representatives in Brussels have reportedly been suggesting that a deal with the UK should not be jeopardised over fishing rights.

The UK’s chief negotiator with Brussels in the post-Brexit trade talks, David, Lord Frost, was quoted as saying:

“On fisheries the gap between us is unfortunately very large and, without further realism and flexibility from the EU, risks being impossible to bridge. These issues are fundamental to our future status as an independent country.”

On Wednesday, The Guardian reported that the UK had suggested a three-year transition period for European fishing fleets, so that they might prepare for post-Brexit changes.

In line with this proposal, catches of EU fishermen would be “phased down” between 2021 and 2024.

After the latest week of negotiations in Brussels, EU chief negotiator Michel Barnier conceded that there needed to be an “increased haul” for UK fishermen.

A final deal, said Barnier, would require “a stable, sustainable and long-term agreement on fisheries, enabling the UK to further develop its fishing opportunities, while ensuring the sustainable use of resources and protecting the activities of European fishermen and women”.

Regarding yet another tricky aspect of the negotiations, the issue of state aid, Frost suggested there had been movement forward.

“On the level playing field, including subsidy policy, we continue to seek an agreement that ensures our ability to set our own laws in the UK without constraints that go beyond those appropriate to a free-trade agreement. There has been some limited progress here but the EU need to move further before an understanding can be reached,” Frost said.

Despite all the hurdles which still need to be overcome by the two sides in the negotiations, at the end of the EU summit in Brussels Von der Leyen said that although there was “a lot of work to do”, before the UK exits the single market and customs union, “where there is a will there is a way.”