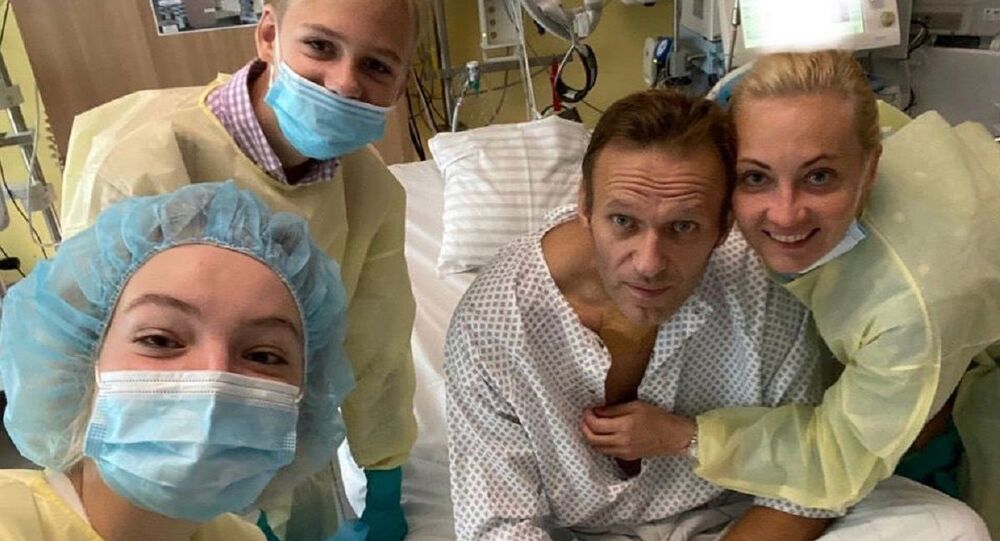 Russian opposition figure Navalny, who has been discharged from the Charité hospital in Berlin where he was treated after an alleged poisoning, claimed in an interview with Der Spiegel that Putin "was behind the crime". But some analysts pour scorn on the suggestion that the Russian president ordered the political figure to be poisoned.

Claims that the Russian leadership could be behind the Alexei Navalny incident do not hold water given that no evidence of his alleged poisoning with the Novichok nerve agent has ever been made public, Andy Vermaut, a Belgian human rights activist and political commentator, believes.

“If Russia was guilty, why is this information not shared publicly with the test results, with the medical reports? You would think that this would be in Navalny's interest”, he stresses.

Moreover, Vermaut points out that it remains unclear “why exactly would Russia use a nerve gas that points directly in their direction”, explaining that such a chemical agent could be produced “easily” with the use of “two separate components from fertiliser that can be obtained separately”.

“Would Putin, sitting comfortably in his chair, have any interest in poisoning an opposition leader and making such stupid and transparent moves?”

The claim that Russia could have used Novichok against Navalny raises questions, given that Moscow was accused of poisoning ex-Russian spy Sergei Skripal and his daughter Yulia in the UK town of Salisbury in 2018, according to George Szamuely, the author of Bombs for Peace: NATO's Humanitarian War on Yugoslavia.

“Novichok, supposedly the most deadly nerve agent known to man, fails to kill its purported victims: the two Skripals, a police officer and now Navalny. Even more remarkably, Russia continues to use a method of killing that repeatedly fails to accomplish its mission”.

The Navalny poisoning story “was riddled with contradictions and should have raised eyebrows with every politician and journalist” from the get-go, said Dr Ludwig Watzal, a journalist and editor in Germany, agreeing with Mr Vermaut.

“The whole poisoning hoax stinks to high heaven. If Navalny would have been really poisoned, he and his companions, not to speak of all the other passengers in the plane, would have been poisoned too. None of them was. What a surprise”, Dr Watzal points out.

Why Was Germany Picked as the Destination to Treat Navalny and Who Could Benefit From it?

Another strange circumstance in the poisoning story is why Navalny was sent to Germany from the Siberian city of Omsk, where doctors treated him after a Moscow-bound flight carrying the opposition figure made an emergency landing, Dr Watzal says.

“All of a sudden, Navalny's entourage claimed that he should be brought to Berlin. Why Berlin? Why not France, Great Britain, or the United States?” claims Dr Watzal.

He adds: “How could the whole Navalny entourage travel to Germany without any restrictions, especially under coronavirus restrictions? They could even go back and forth”.

After Navalny was transferred to Berlin, the German government demanded that Russia open an investigation into Navalny’s "poisoning" and punish the culprits, but refused to cooperate in any such investigation, Szamuely says.

He argues: “It is hard to see how Russia can open an investigation. There needs first to be evidence of a crime. The claim that a crime has been committed emanates from Germany. Yet Germany refuses to provide any evidence for this. As far as Russia is concerned, its doctors found no traces of poison on Navalny”.

According to Mr Vermaut, "more and more this seems to be a well-orchestrated action of damage, where Navalny, as a friend of the West, is now allowed to damage Russia to the maximum".

Mr Vermaut says he believes that the incident, and the involvement of German Chancellor Angela Merkel, may have been cooked up to discredit Russia and destroy the Nord Stream 2 gas pipeline, which is already 90 percent constructed. The same assessment is echoed by Mr Szamuely:

"Germany seems to be escalating its war of words against Russia, and Navalny seems to be playing his assigned role here. The conventional wisdom here is that it's all about the German national security establishment's hostility to Russia and its eagerness to terminate the Nord Stream 2 project”, he points out.

© AFP 2021 / JOHN MACDOUGALL
View of the Nordstream gas pipeline terminal prior to an inaugural ceremony for the first of Nord Stream's twin 1,224 kilometre gas pipeline through the baltic sea, in Lubmin November 8, 2011

However, scrapping Nord Stream 2 would damage Germany as well as Russia, according to Dr Watzal.

"In cancelling the project, Germany would have to pay billions of euros compensation to the companies, and Germany would lose every credibility as a serious trade partner", he suggests.

Speaking about who could come out as the winner in this case, Martin Love, a retired US journalist who lives in North Carolina, says Washington, DC.

"The obvious beneficiary of this alleged poisoning of Navalny is the US because it harms the relations between Russia and Germany and thus the EU in general. Russia and Germany are natural trading partners and the US seems capable of trying anything to turn Germany’s attention away from any kind of detente or partnership with Russia".

"I don’t think there is any question that Navalny may have a connection to the CIA, and if not, he was set up somehow to discredit Russia and Putin", Martin Love concludes.