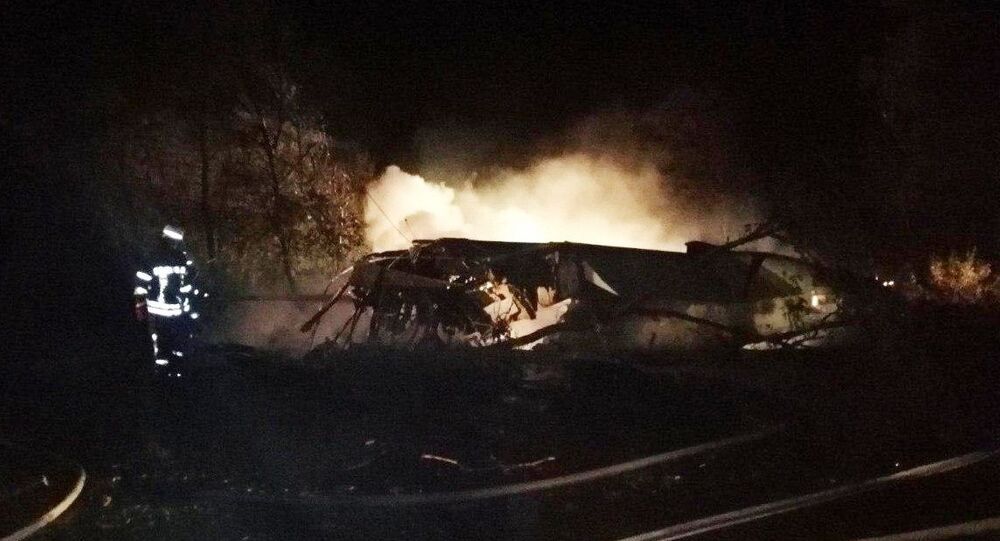 26 people, comprising 19 air cadets and seven flight crew, were killed after the Antonov AN-26 military transport plane they were traveling in slammed into the ground outside an air base about 420 km east of Kiev on Friday night. One cadet survived the crash.

CCTV camera footage captured the final seconds of the flight of the An-26 aircraft which crashed in Kharkiv region, eastern Ukraine Friday.

The footage, posted by Ukrainian Deputy Minister of Internal Affairs Anton Gerashchenko on his Facebook page, was said to have been filmed by a camera installed on a high-rise building in the city of Chuguev.

The bright lights on the far left side of the screen in the video are said to be the landing strip where the plane was coming in to land, but the AN-26 is seen turning on its landing lights and suddenly banking sharply to the left, descending and exploding after several seconds.

According to the Interior Ministry, the pilot reported problems with the plane's left engine to ground control, but expressed confidence that he could carry out an emergency landing.

Friday’s crash took place during a training flight, with a preliminary assessment by the Ukrainian Defence Ministry released Saturday saying that the accident was likely caused by an engine sensor failure. The plane’s black boxes have been found and sent away for further analysis.

© REUTERS / VYACHESLAV MADIYEVSKYY
What We Know So Far About AN-26 Military Plane Crash in Ukraine's Kharkov Region
Two cadets were said to have survived the crash, but one of them later died of his wounds. The second is at present recovering from non-life threatening injuries in hospital. Most of the 20 cadets onboard the plane were said to be between the ages of 19 and 22.

A day of mourning has been declared across Ukraine in connection with the crash.

Colonel-General Gennady Zibrov, head of Russia’s Zhukovsky-Gagarin Air Force Academy, expressed condolences to the families of the victims of the crash, as have officials from Germany, Turkey, the European Union, Belarusian President Alexander Lukashenko and Patriarch Kirill of the Russian Orthodox Church.

Designed and built in the Soviet Union between 1969 and 1986, the AN-26 is a turboprop military/civilian transport aircraft operated by more than two dozen countries in Eastern Europe, Asia, Africa and Latin America. Ukraine is believed to have about two dozen AN-26s of various modifications.