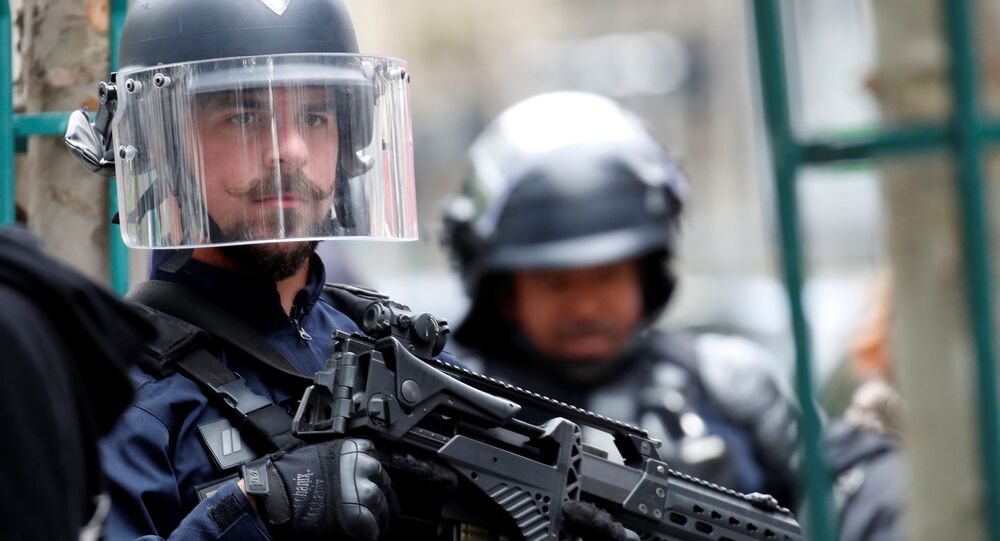 The attack took place near the former offices of Charlie Hebdo magazine, which has recently republished cartoons of the Islamic Prophet Muhammad, which are believed to have angered jihadists and sparked the killings in 2015.

Two people have been injured in a stabbing attack on Boulevard Richard Lenoir in Paris near the former offices of Charlie Hebdo magazine, the police confirmed to Sputnik on Friday. French anti-terror prosecutors have ordered an investigation into the case of "attempted murder in connection with a terrorist organisation and a criminal terrorist community."

French Interior Minister Gerald Darmanin told France 2 TV channel on Friday evening that the attack was "clearly an act of Islamist terrorism", but added that there was no proof that the main suspect had been radicalised.

Earlier in the day, French media reported that a man, armed with either a machete or a large knife, went on a stabbing spree in the area.

He attacked male and female employees of the Premieres Lignes news agency as they were having a cigarette break, injuring them on the upper body, according to the founder and co-head of the company, Paul Moreira. One of the journalists received a wound to their head.

"A guy came out of nowhere and said nothing, started hitting them, they screamed and luckily they had enough energy to run away and escape their attacker," BFMTV quotes Moreira as saying.

The security forces arrested a man who corresponded to the description of the attacker given by victims and witnesses on the steps of the Bastille Opera. According to France's Radio Europe 1, the detainee was an 18-year-old man of Pakistani origin. He confessed his crime to the police, BFMTV said citing anonymous sources.

The police initially said they were not planning to conduct any further arrests, despite reports in French media suggesting that there was another suspect in the incident. However, minutes later the police arrested another suspect, French prosecutors confirmed. He is reported to be an ethnically Algerian 33-year-old man, according to a police source, cited by Reuters. While his role in the attack is still investigated, the suspect is said to have been spotted with the attacker in the metro.

Hours after the attack, BMF TV reported that five more people were detained in connection with the stabbing spree.

​Both the police and the French Prime Minister Jean Castex initially said there were four wounded in the incident, but they revised the number later to two injured, without providing the explanation for the discrepancy.

According to media reports, French President Emmanuel Macron is closely following updates on the attack.

The incident took place near the Charlie Hebdo building that was the scene of a terrorist attack in 2015 in which twelve died. The terrorists, angered by the magazine's depiction of the Prophet Mohammed, also killed a police officer the next day and another four people in a Hypercacher store on 9 January.

The publisher has recently reprinted the cartoons on the eve of the trial of 14 suspects accused of helping carry out the attacks.

The trial kicked off at the beginning of September and is due to last two months, after having been postponed over the COVID-19 pandemic. The court is looking into the roles of 14 defendants, three of whom are being tried in absentia, in organising the three-day series of killings that rocked France back in January 2015.