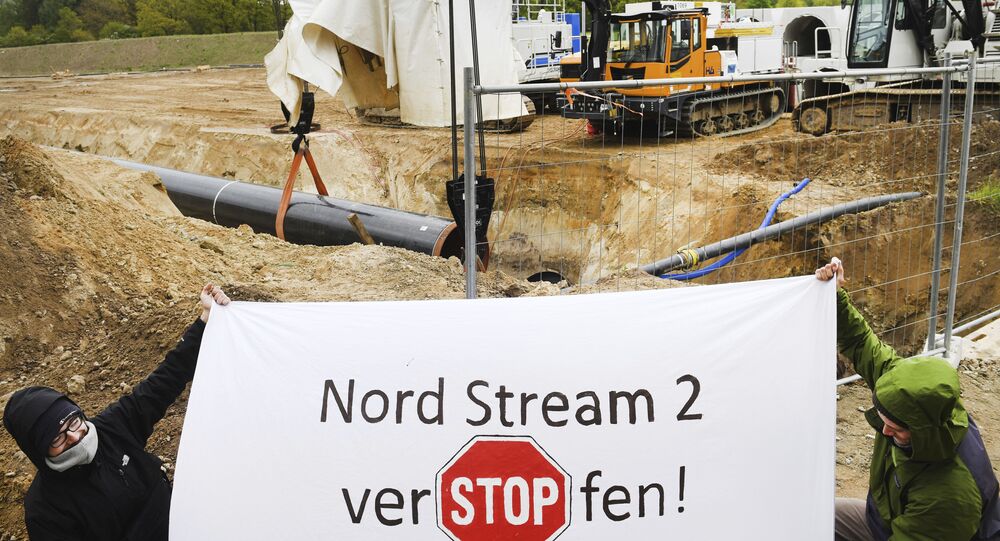 As some German politicians have voiced calls to draw a line under or temporarily suspend the $10.5 billion Russian-European pipeline venture over the alleged poisoning of opposition figure Alexei Navalny, Angela Merkel has weighed in, urging the international community to look upon the mutually profitable project in isolation from the incident.

Friedrich Merz, a candidate for the presidency of the Christian Democratic Union party and a possible successor to Angela Merkel as German chancellor, has called for a two-year suspension to the construction of Nord Stream 2, speaking at an event of the CDU youth organisation in the federal state of lower Saxony, as reported by BILD.

“I believe that we should finish the construction. […] We should not become too dependent on energy supply either from the Americans or from Russian gas”, the tabloid quoted Merz as saying, adding that the politician “linked this to the call for a two-year moratorium” on the construction of the promising pipeline.

Nord Stream 2 is a 1,230 km, $10.5 billion pipeline project involving Russia's Gazprom and its partners - several major Western European energy companies. When completed, the pipeline is expected to double the 55 billion cubic metres of gas per year capacity of the existing Nord Stream network, and turn Germany into a major energy hub for energy deliveries.

The project has of late landed in critics’ crosshairs in connection with an incident involving Russian opposition figure Alexei Navalny, who, as claimed by German labs, was poisoned by a “Novichok-type nerve agent” on 20 August, with several German politicians having since called for a halt to the construction of the pipeline.

Chancellor Angela Merkel reiterated to US senators, who are planning new restrictions against the project, that Nord Stream 2 would be finalised regardless of any new sanctions. Since then, however, German Foreign Minister Heiko Maas has said that Berlin could not rule out “freezing” Nord Stream 2 in connection with the Navalny case.

Merkel argued that the project should be viewed separately from the Navalny case, with the Kremlin, in its turn, calling for the Nord Stream 2 venture not to be politicised and reiterating that the project is commercially profitable for all the parties involved.

Alexei Navalny was rushed to a hospital in Omsk on 20 August after he fell gravely ill on board a Moscow-bound plane, which had departed from Tomsk. The incident prompted the pilot to make an emergency landing in the Siberian city of Omsk, with the activist shortly thereafter falling into a coma. Omsk doctors made a preliminary conclusion that a sudden and rapid drop in glucose due to a metabolic imbalance was to blame for Navalny's grave condition. When he was stabilised, the opposition figure's relatives requested permission for him to be transported to a Berlin clinic.

German medics said they found traces of cholinesterase inhibitors in the patient's blood, despite Russian doctors not finding any during his initial hospitalisation in Omsk. Over a week later, German authorities claimed, citing their labs' findings, that the Russian opposition figure had been poisoned with a military-grade nerve agent from the Novichok group – a substance allegedly used to poison former Russian spy Sergei Skripal and his daughter in 2018. Russia's Foreign Ministry has since said that Berlin has so far failed to provide any substantial data supporting its accusations, despite Moscow's insistent requests to this end.

US Opposition to Nord Stream 2 Was Never About Selling More Gas to Europe, State Department Claims