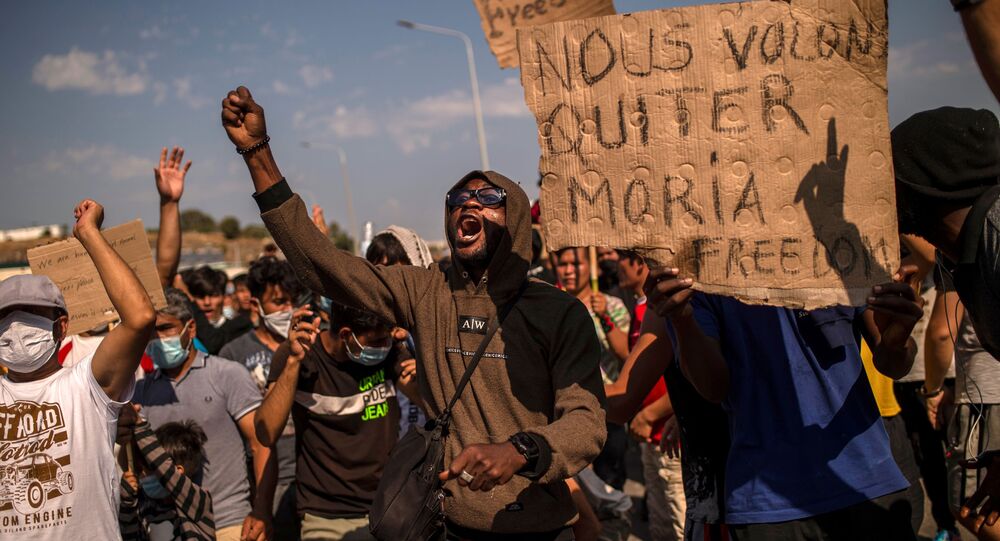 BRUSSELS (Sputnik), Luc Rivet - Following years of unsuccessful attempts to find a consensus on tackling the migration time bomb, the European Union's executive arm is finally set to unveil a plan for policy overhaul on 23 September after being spurred into action by the devastating Moria camp fire that left some 12,000 migrants without shelter.

President Ursula von der Leyen was scheduled to present the long-delayed migration pact on 30 September, but last week’s blaze that destroyed the largest camp on the Greek island of Lesbos added extra urgency to her policy announcement.

The migrant crisis in Europe started in 2015, when Chancellor Angela Merkel started taking in undocumented migrants entering Germany, most of them through the "Balkan route," coming from Turkey and crossing the Aegean Sea into Greece.

The influx reached about 1.5 million refugees and migrants. The crisis made Austria, Hungary and other countries close their borders over fears of being overwhelmed by the inflow, which included not only asylum seekers, but also economic migrants and their families.

The German Interior Ministry estimated the number of additional arrivals due to the system of "family regrouping" at 4.5, implying that each accepted migrant would later be joined by more than four people (wife, children, parents). All of them would also be eligible for social benefits at the expense of the taxpayers of the host country.

This policy swiftly became unpopular in many European countries and contributed to Brexit, as well as the rise of right-wing parties who oppose the open-arms approach.

The Dublin Regulation, which stipulates that asylum seekers must be processed in the country of their first arrival, led to Italy, Greece and to a lesser extent Spain being flooded with migrants’ arrivals. Their calls for help to Brussels or other member states mainly fell on deaf ears.

Five years since the onset of the crisis, the migrant flow across the Mediterranean and the Aegean seas has subsided, but crisis has not been resolved and Turkish President Recep Tayyip Erdogan keeps threatening Europe to "open the gates" to hundreds of thousands of migrants.

In the wake of the blaze, 10 EU member states committed themselves to accepting a total of 400 minors who were previously based at the camp. German Interior Minister Horst Seehofer announced on Tuesday that Germany would accept some 1,500 migrants on top of 100 to 150 unaccompanied minors.

Political parties on the left of the political spectrum claim that it is not enough. That would still leave more than 10,000 migrants on Lesbos, without status and no decision about their future.

The European Commission defends member states’ efforts, noting that the bloc did help Greece to relocate part of the population.

"There are about 12,000 in the Moria camp and about 14,000 migrant population on Lesvos in total, and none are arriving. In fact, in the last 6 months, the resident population of the Moria camp reduced from over 25,000 to about 12,000, also thanks to our support to the Greek authorities," the commission spokesperson for migration, Adalbert Jahnz, told Sputnik.

The bloc is now waiting for September 23, when von der Leyen is going to present proposals for a new pact on migration and asylum.

In the months before the policy announcement, EU Commissioner for Home Affairs Ylva Johansson lamented in an interview with Politico that "voluntary solidarity" is not enough and that she is in favor of mandatory mechanisms.

In September, the Swedish commissioner reiterated her stance live on Sweden’s NVT: "We are tired of ‘ad hoc’ solutions. We need a common regulatory framework, and Sweden is one of the countries that support a mandatory system of solidarity where all countries participate and contribute when a country is in a vulnerable situation, such as Greece."

She noted that a common migration policy was a complex issue, but "the system for people crossing borders irregularly, around 140,000 last year, needs to be improved. Especially to ensure the return of those who do not have the right to stay."

All figures presented by European member states indicate that very few undocumented migrants do finally leave the EU. When they receive an order to quit the territory, most of them simply disperse and go underground.

In France in 2018, of all people supposed to leave the country, only 91,150 did actually leave and 479,275 stayed. The ratio is the same in Belgium or Italy and a little better in Germany, but the problem remains. The question is whether the much-anticipated pact will effectively address the issue of hotspots and expulsions.

As for Johansson’s remarks over "mandatory solidarity," Sputnik received the following answer from commission spokesperson Jahnz: "your interpretation of what this ‘practically means’ is entirely misleading. You will have the opportunity to judge for yourself the content of the Pact once it is published. It will indeed be subject to approval by the European Parliament and the Council."