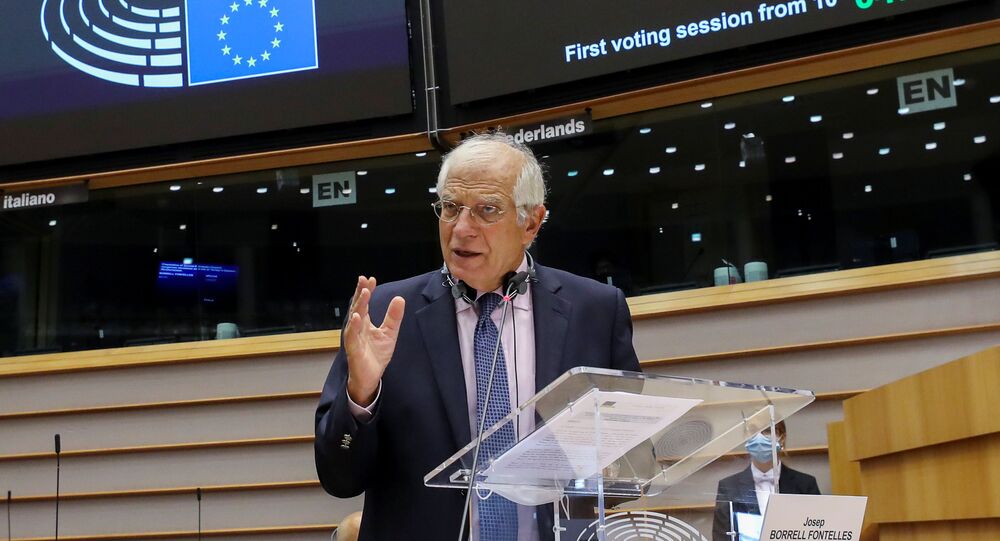 MOSCOW (Sputnik) - The tongue-slip of EU foreign policy chief Josep Borrell in the European Parliament may indicate the "depth" of proficiency in the Belarusian dossier in Brussels, Belarusian Foreign Minister Vladimir Makei said.

"I’ll ask right away: don’t interpret my answer as interference in the internal affairs of Ukraine. ... Although, of course, already this tongue-slip, unfortunately, obviously shows the depth of Brussels' proficiency in the Belarusian dossier. Perhaps, this is partially our flaw. Everyone can be wrong. But in this case, something else is totally upsetting - the EU’s complete unwillingness to even try to objectively understand the ongoing processes", Makei said.

"Therefore, Borrell's assessments, what he is talking about, are categorical and tendentious — that sanctions must be adopted before the upcoming meeting of the Council of the EU, and this, in his words, should confirm the authority of the EU. I can't believe it, but this is almost a quote. And we were sure that the EU's authority does not rest on sanctions", the minister stressed.

Makei also mentioned the categorical demands for the start of some kind of inclusive national dialogue.

"Of course, from a professional point of view, I think that demanding what has already been planned and announced is evidence of undoubtedly good bureaucratic experience and analytic calculation. Then I remind you that the president of Belarus recently reaffirmed his readiness to initiate the process of reforming the political system in the country based on the adoption of amendments to the Constitution. It was enough just to read or quote the head of the Belarusian state. Or is the dialogue understood as some other algorithm capable of quenching the thirst for EU's lacking geopolitical revenge?" Makei said.

He also commented on the EU's position that re-holding the elections was the best solution.

"The best solution for whom? For the EU, which failed to win the elections in Belarus? Are you sure that this would be the best solution? Are there examples where such 'best solutions' of the EU led to the best results? Or Borrell's tongue-slip was semantic?" he said.

Minsk is still ready for a dialogue with the European Union and all interested international partners, and believes that Brussels has the same approach, Makei said.

"I declare once again that the Belarusian side is always ready for an open and mutually respectful dialogue with all interested international partners, including the European Union. I must admit that, following the results of my previous personal and phone contacts with Mr. Borrell, I got the impression that the EU has the same approach", Makei noted.

"I would not like to be completely disappointed in this", the minister stressed.

In his speech, Borrell said that Lukashenko was not the legitimate President of Belarus for the European Union, but said "Ukraine" instead of "Belarus." He was corrected and apologised.

In addition, the EU is revising its partnership with Belarus and considering which sectors could be frozen, the high representative said.

Belarus has been gripped by protests since the 9 August presidential election, as a result of which President Alexander Lukashenko was elected for his sixth consecutive term. The opposition did not recognize the results, claiming that Tikhanovskaya was the true victor. The initial wave of protests was met with occasional excessive use of force by the Belarusian police, which used rubber bullets, stun grenades and teargas against the protesters.