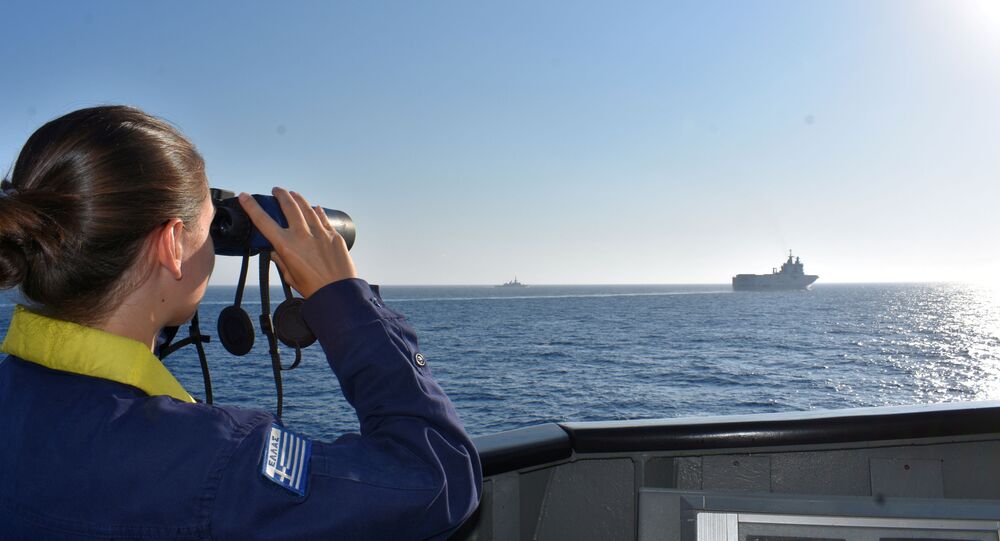 The Turkish-Greek standoff over drilling in the Eastern Mediterranean has simmered for months, escalating in early August, when Athens demanded that Ankara immediately halt its "illegal" gas exploration activities in the area.

Greek Prime Minister Kyriakos Mitsotakis has announced a major arms purchase programme for the country, which was reportedly hammered out during his talks with French President Emmanuel Macron at an EU summit in Corsica earlier this week.

“The time has come to reinforce the armed forces […]. These initiatives constitute a robust programme that will become a national shield”, Mitsotakis said in a keynote address in the northern city of Thessaloniki on Saturday.

© REUTERS / Handout .
Greek and French vessels sail in formation during a joint military exercise in Mediterranean sea, in this undated handout image obtained by Reuters on August 13, 2020.

Additionally, the country will recruit 15,000 new troops and inject funds into the national arms industry and cyberattack defence, Mitsotakis said, in what is expected to become Greece’s most ambitious military overhaul in almost 20 years.

French Defence Minister Florence Parly, for her part, welcomed the Paris-Athens arms deal, which comes amid the ongoing standoff between Greece and Turkey over gas drilling in the Eastern Mediterranean.

She spoke after Mitsotakis reiterated Athens’ desire to conduct dialogue with Ankara, provided Turkey stops acting "like a provocateur”.

“We do need dialogue, but not when held at gunpoint. If we cannot agree then we must seek resolution at the (International Court of Justice at the) Hague”, the Greek prime minister noted in a recent article published in The Times, Frankfurter Allgemeine Zeitung, and Le Monde.

Both sides have rejected each other's agreements as null and void, while the EU has warned that unless Turkey sits down for talks with Greece, the bloc will slap sanctions on Ankara before the end of September.

Turkish President Recep Tayyip Erdogan, meanwhile, warned his French counterpart Emmanuel Macron “not to mess with Turkey” after Macron urged the EU to adopt a “united and clear” stance on Turkey, accusing Ankara of “no longer [being] a partner in this [Eastern Mediterranean] region".

The French president called on Brussels to outline “red lines” with Turkey, while simultaneously working to “restart a fruitful dialogue” with Ankara.

The Turkish Foreign Ministry responded by describing Macron’s comments as “arrogant”, and claiming that they were a “reflection of his incompetence and despair”.