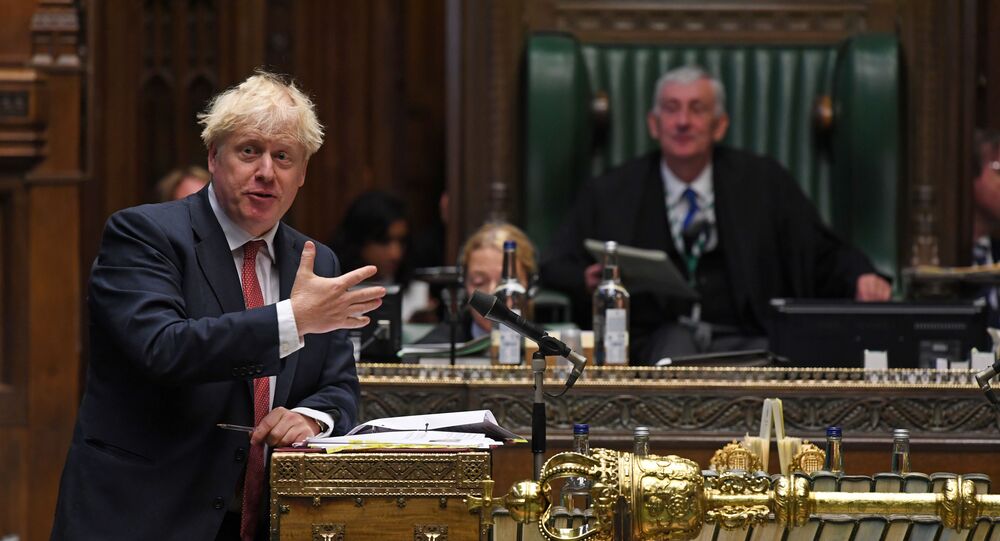 On Thursday the United Kingdom made it “perfectly clear” it had no intention of complying with the EU demands that it ditch plans to rewrite parts of the Brexit Withdrawal Deal "by the end of the month", as Brussels stated that Boris Johnson’s government had "seriously damaged trust" and did not rule out taking legal action against the UK.

UK Prime Minister Boris Johnson is increasingly forced to contend with opposition to his plans to override parts of the Brexit Withdrawal agreement originally concluded between the UK and the European Union, writes The Times.

Up to 30 Tory MPs are reportedly gearing up for a revolt against the move, which would constitute a breach of international law.

Tory MP Bob Neill, chairman of the justice select committee, is said to have tabled an amendment to introduce a “parliamentary lock” that would bar the government from going through with plans to override the deal without parliament’s support, with a vote anticipated some time next week.

Opposition has also been brewing in the House of Lords, with Lord Howard of Lympne, a prominent Brexiteer, becoming the third former Tory leader to reject Downing Street’s plans for having the potential to do damage to Britain’s global reputation.

“Does [the minister] not understand the damage done to our reputation for probity and respect for the rule of law by those five words uttered by his ministerial colleague in another place on Tuesday – words that I never thought I would hear uttered by a British minister, far less a Conservative minister. How can we reproach Russia or China or Iran when their conduct falls below internationally accepted standards when we are showing such scant regard for our treaty obligations?” Lord Howard was cited as saying in the House of Lords.

Another Brexiteer, Lord Lamont of Lerwick, formerly chancellor of the exchequer, was cited as saying there was “no way” the legislation aimed at allowing ministers to override elements of the withdrawal agreement, would pass through the Lords.

As rebellious sentiments grow, The Times cites a government source as dismissing speculations that for MPs who voted against the government over the Internal Market Bill, a repeat of last year’s situation was possible, when “rebels” had their whips removed after voting against Johnson’s Brexit deal.

“We’re not in the same place,” said the source.

On Wednesday, the UK government introduced the Internal Market Bill, legislation that targets a specific part of the EU-UK Withdrawal Agreement.

It addresses the Northern Ireland Protocol - an element of the deal designed to prevent a hard border from returning to the island of Ireland.

The Withdrawal Agreement is also known as the Brexit deal that Prime Minister Boris Johnson struck with the European Union, it ultimately allowed the UK to leave the EU with a deal on 31 January 2020 and enter into a transition period.

However, as the sides set out to negotiate their future relationship on issues ranging from trade to security, talks have largely stalled.

The EU slammed Downing Street for having "seriously damaged trust".

The strongly-worded statement from Brussels warned that the withdrawal agreement was a legal obligation, adding that "neither the EU nor the UK can unilaterally change, clarify, amend, interpret, disregard or disapply the agreement". It also intimated it would not rule out taking legal action against the United Kingdom, as it warned Boris Johnson that he had three weeks to abandon his plans.

Nonetheless, cabinet minister Michael Gove said the UK had made it "perfectly clear" it would not withdraw the bill.

“I made it perfectly clear to Vice-President Sefcovic that we would not be withdrawing this legislation. He understood that. Of course he regretted it,” said Gove.

The outlet suggests that the UK government intends to fast-track the legislation through the Commons by the end of the month.

The current spat between London and Brussels comes against the backdrop of another round of trade negotiations between the two sides, with EU chief negotiator Michel Barnier saying "trust and confidence are and will be key", as talks wrapped up on Thursday.

The negotiator for the UK side, David Frost, underscored remaining "significant" differences over a free trade deal, but added discussions would continue in Brussels next week.

The EU’s deadline to Johnson regarding the planned changes to the Withdrawal Deal coincides with the final round of trade negotiations between the sides, with a no-deal Brexit once again looming.