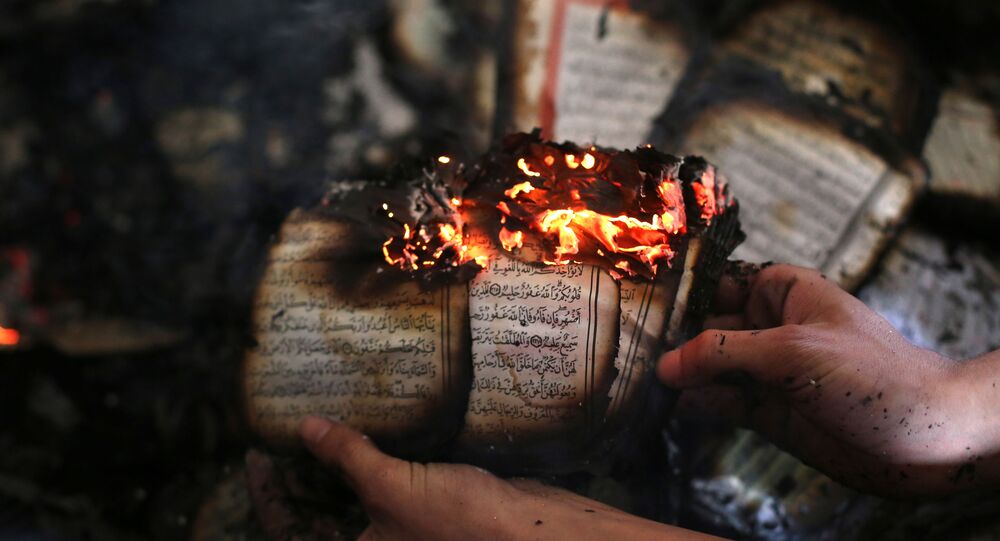 Barely two weeks ago, a Quran burning by the same party unleashed massive riots, and Hard Line pledged to continue their demonstrations, which they see as a celebration of free speech.

Another copy of the Quran has been burned in Sweden by representatives of the Danish party Hard Line, which was protesting the Islamisation of the country, this time in Stockholm's ethnic enclave of of Rinkeby.

Hard Line and its party leader Rasmus Paludan previously applied to hold five demonstrations in “Stockholm's Islamised suburbs”. Paludan himself pledged to burn a copy of the Quran “with bacon” on Saturday, regardless of whether permission is given or not.

However, without waiting for Saturday, Hard Line proceeded to torch a copy of the Quran. On its Facebook page, the party called Islam an “evil and primitive” religion that “has no place in a civilised society”. According to the newspaper Aftonbladet, the action took place on Thursday morning, without drawing much attention, unlike the previous demonstration that sparked Islamic riots.

The police announced that the matter is being investigated as incitement against an ethnic group, and according to Aftonbladet, they are looking for a Skoda with Danish number plates. No arrests have been made so far.

​Founded in 2017 by lawyer-turned-politician Rasmus Paludan, Hard Line is a Danish fringe party that barely missed the parliamentary threshold in the 2019 election. It stands for stopping non-Western immigration, banning Islam and deporting Muslims from Denmark. It is best known for their demonstrations that often feature Quran-burnings, at times wrapped in bacon, clips of which are ultimately uploaded to their Facebook page. These actions have also landed Paludan himself in grave danger as he has survived several assassination attempts over the years.

At the end of August, Hard Line visited the Swedish city of Malmö to demonstrate against Islam, arguing that it cannot be integrated into civilised societies. During the visit, a copy of Islam's holy book, the Quran, was burned in the ethnic enclave of Rosengård, while a game of “Quran football” was held at another square. Both incidents sparked violent riots among Malmö's Muslim population, during which several police officers were injured. The Swedish authorities failed to stop the demonstration, and the city of Malmö subsequently denied any religious undertone to the riots.

In connection with the events in Malmö, Paludan was banned from entering Sweden for two years, despite claiming himself to be a Swedish citizen.