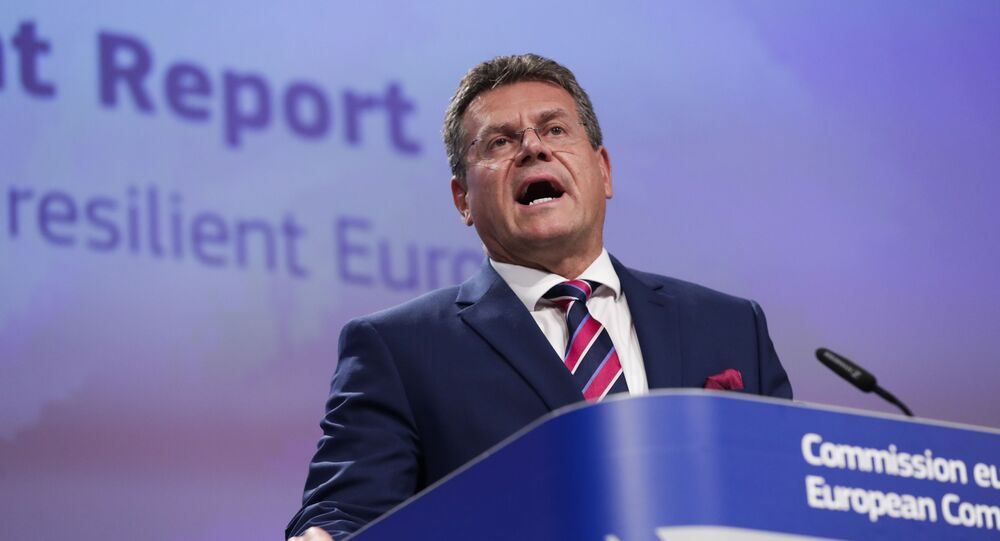 The European Commission earlier expressed concern over UK intentions to change its position on Brexit arrangements, as the British government unveiled a new Internal Market Bill that quickly drew criticism over possible violations of international law.

The vice president of the European Commission, Maros Sefcovic, will travel to London on Thursday to participate in an extraordinary meeting of the EU-UK Joint Committee on the Withdrawal Agreement, according to a statement by Erik Mamer, chief spokesperson for the EU Commission.

"Following today’s announcement by the UK, Maros Sefcovic will travel to London tomorrow to meet Michael Gove for an extraordinary meeting of the Joint Committee. The EU seeks clarifications from the UK on the full and timely implementation of the Withdrawal Agreement", Mamer tweeted Wednesday.

The statement announcing the extraordinary meeting of the Joint Committee was made by Sevcovic earlier on Wednesday as he expressed EU concerns over the UK announcement.

The new legislation describes how the trade powers currently held by the European Union will be transferred to the British government from 1 January 2021 onward. Critics denounced the bill as a "full frontal assault on devolution”, and warned that it could lead to the creation of a hard border between the Republic of Ireland and Northern Ireland.

A hard border would undermine the Good Friday accord - an agreement that ended the 30-year conflict in Northern Ireland, between pro-Irish republicans and the pro-British loyalists, particularly avoiding a hard border between Northern Ireland and the Republic of Ireland.

London's new plans on trade regulations - which, according to a British government minister, could violate international law in a way described as "specific and limited" - drew criticism from the EU, the US and devolved administrations in the UK.

US Speaker of the House Nancy Pelosi warned that the UK-US trade agreement would not pass in Congress if the new Brexit rules are in breach of the Good Friday accord. EU Commission President Ursula von der Leyen said she is "very concerned" about the switch in London's "intentions to breach the Withdrawal Agreement".

On 31 December, 2019, the United Kingdom formally exited the European Union, remaining a member of a single market until the end of the transition period, set to expire at the end of 2020.