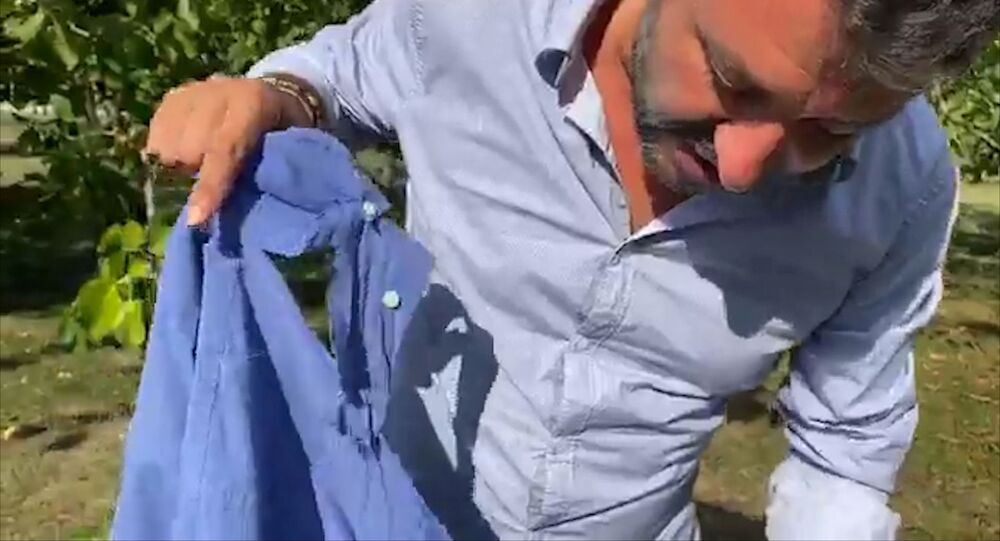 The Italian politician complained about his altercation with the woman, whose identity is not presently known, in a Facebook livestream where he showed his subscribers the damaged piece of clothing as well as the rosaries that she also ripped from his neck.

A young woman angrily confronted Matteo Salvini in the town of Pontassieve, near Florence grabbing him by the shirt and tearing it, while ripping rosaries from his neck.

The standoff, which was caught on camera and uploaded on Twitter, took place when the former deputy prime minister for the Lega Nord party was visiting the region ahead of regional elections scheduled for 20-21 September.

The woman is also seen shouting profanities at the politician, repeating the phrase 'Damn you!' before clutching at him. Seconds after she attacked Salvini, police officers dragged her away from him. Local media reported that she was a 29-year-old woman "from Congo".

The Lega Nord politician later launched a livestream on Facebook showing his subscribers what was left of his shirt and the rosaries.

© REUTERS / MATTEO SALVINI FACEBOOK
Leader of Italy's far-right League party Matteo Salvini displays his rosary beads that were broken by a woman who assaulted him while he was campaigning in the town of Pontassieve in the central region of Tuscany, during a live steam on his Facebook page from Mugello, Italy, in this still image taken from video, September 9, 2020.

"I respond to this anger with a smile and with work. Long live the Italy of women and men who believe in freedom, serenity and work," he said.

Salvini is set to appear in court next month over allegations he illegally detained migrants at sea - a charge he denies.

Italy saw a sharp rise in the number of migrants trying to reach its coasts in June and July. Nearly 18,000 migrants came ashore between January 1 and August 28, more than three times the number recorded during the same period last year.