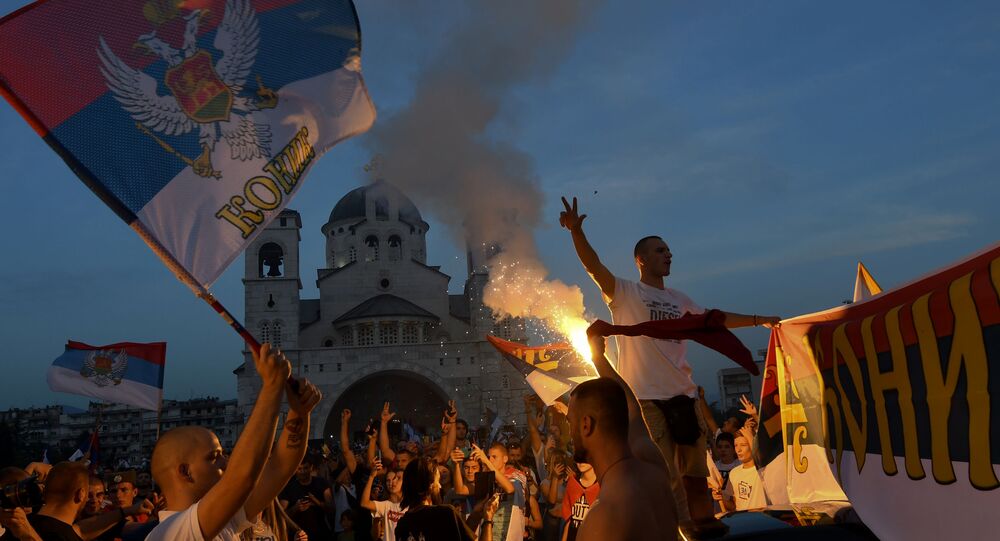 Who is Mr Dritan Abazovic, Young Montenegrin Politician, On Whom It All Depends?

Dritan Abazovic is 34 but his political career spans over 10 years. He has had time to write a book and a dozen scientific articles, to be a member of parliament and director of a TV channel; to become the leader of a political party, a star of social networks and, ultimately, a power broker in Montenegrin politics.

It is up to him to decide whether Milo Djukanovic, who has been running Montenegro for 30 years, will prevail or whether the opposition, which has gained popularity thanks to the people's indignation over the oppression of the Serbian Orthodox Church, will win.

After Montenegro's largest opposition coalition “For the Future of Montenegro”, led by Zdravko Krivokapic, gained 92.55% of the vote, losing only 2.5% to the ruling Democratic Party of Socialists of Montenegro (DPS), it became clear that by uniting, all three opposition coalitions would be able to gain a majority in parliament by one vote (41 out of 81) and form a government.

Four Votes You Can’t Do Without

The core of the list “For the Future of Montenegro” (Za budućnost Crne Gore) is a union of Serbian parties Democratic Front (Demokratski front), the second opposition list "Peace Is Our Nation" under the leadership of Aleksa Bečić was also formed on the basis of the Serbian party Democratic Montenegro (Demokratska Crne Gora), and their unwillingness to cooperate with the DPS and their desire to unite for a change of power was unquestionable. Meanwhile, the third opposition coalition, “Black on White” (Crno na bijelo), was established on the basis of the URA party (stands for the Civil Movement United Reform Action – ed. note Sputnik), which was far from Serbian nationalist ideas and led by ethnic Albanian Dritan Abazovic.

The Serbian opposition parties would not have been able to gain a majority without 4 deputy votes won by Abazovic at Sunday's elections: Bosniak and Albanian parties in Montenegro would not have joined the coalition. That is why all eyes have been on the figure of Abazovic, who is young, ambitious and promotes progressive multiculturalist views in a country where politics is largely based on the national interests of minorities.

Regional media dubbed him the “Albanian Chetnik” because of his image as a “fighter” and his willingness to unite with the Serbs against the regime of Milo Djukanovic.

Dritan Abazovich was born in 1985 in Ulcinj. He entered politics more than 10 years ago, and in 2017 Abazovich became the leader of the URA Civil Movement, which promotes social liberalism, pro-Europeanism, “green” ideas, multiculturalism and the fight against corruption. In a short time, Abazovich managed to gain popularity.

“For thirty years we waited for the change of power, many people did not believe in it at all, but these people (opposition politicians and their electorate, probably – ed. note Sputnik) believed. Congratulations to all of them! We have put our names in history. Those who voted for the DPS are not enemies of the state, but the mob will no longer rule this country. As we have promised, we would welcome everyone. We knew that we would become game-changers, we knew that. We defeated the mob without any money; we won with our heart and knowledge. Montenegro deserves to be governed by an expert government in the coming years. We must fulfil the desire of the people who chose freedom”, Abazovic said during a press conference following the elections.

In 2012, he was one of the founders of the party “Positive Montenegro” (Pozitivna Crna Gora), which gained seven mandates the same year, and Abazovic became the youngest member of the Parliament of Montenegro of the 25th Convocation. After a split in the party in 2014, Abazovic left the “Positive Montenegro” and for a year continued as an independent deputy until 2015 when he joined the newly formed URA. During that parliament term, many people remembered him due to the then Prime Minister Milo Djukanovic calling him a “hooligan” because of his claims against the “multimillion-dollar loans received by Djukanovic's firms”.

His second nickname, deeply anchored in the media, was “Albanian Chetnik”, which Abazovic explained himself:

“It stands for the fight against organised crime and corruption”.

For Believers – Equality, For Neighbours – Friendship!

Commenting on the situation around the Serbian Orthodox Church, which, according to the Law on Religious Freedom, risks losing its property in Montenegro, against which Montenegrin Serbs and sympathetic believers have been actively protesting since the beginning of the year, Abazovic said the following:

“I am sure that Montenegro needs a law on religious freedom, but it should be a modern and European law. And any reasonable government would develop such a law in half an hour because there are only a few controversial points. We only want equal treatment of religious communities, so that all of them are on the same level, which the current authorities did not want to do”.

He advocated better relations with Montenegro’s neighbours, said he was sorry that tensions with Serbia had reached unacceptable levels and stated that there was no country closer to Montenegro than Serbia.

“We must build an optimal neighbourhood policy, especially in relations with Serbia, which is closest to us, as well as with other countries in the region”, Abazovic stressed.

Abazovic did postgraduate work abroad, including at universities in Austria, USA, Norway, and Luxembourg.

He published his book “Cosmopolitan Culture and Global Justice” (Kosmopolitska kultura i globalna pravda), and over a dozen scientific articles in regional and international journals. His academic interests include political philosophy, globalisation and ethics.

Since his school days, Abazovic showed exceptional social and political activity. For example, he participated in the organization of youth groups of the Helsinki Committee for Human Rights, whose activities were aimed at reconciliation of youth in post-conflict regions of former Yugoslavia.

As a visiting lecturer, he has collaborated with the Istanbul Bilgi University in Turkey and the Iligan Institute of Technology of Mindanao State University, Philippines.

Abazovic was an activist in several non-governmental organisations, and before becoming a parliamentarian he was deputy director and then director of the Ulcinj TV channel Teuta. Among other things, Abazovic actively wrote columns for Montenegrin Vijesti, local Al Jazeera and the Podgorica Portal PCNEN.

Leaders of all three opposition coalitions met and agreed on joint principles for the future government and cooperation immediately after the 31 August elections, while yesterday Abazovic posted on Twitter to dispel general doubts about whether he would swing to Djukanovic:

“I give my word that the Black on White coalition will not give up under any pressure, that it will be guided solely by the national interests of Montenegro, and the key interest out of all is to complete the transfer (of power) and form an expert government”.

However, the plot thickens. The scandal surrounding the night attack on the building of the Islamic community in Pljevlja is currently unfolding – an unidentified person or a group of unidentified persons threw stones at the doors of the building, breaking glass and leaving a threatening message: “A black bird is taking off, there will be a Srebrenica in Plevlyah”.

Representatives of Bosniak and Albanian political parties in Montenegro blamed Serbs for this act of vandalism and incitement to hatred on national and religious grounds. Representatives of the opposition, whose backbone are Serbian parties, argue that this is a provocation linked to the fact the DPS is unable to admit defeat with dignity and unwilling to give up power. In theory, everything that is happening can affect Abazovic's decision to side with the Serbs against Djukanovic.

In the meantime, the “Albanian Chetnik” is becoming increasingly popular on social media.

The article was written by Radmila Alkalaj.