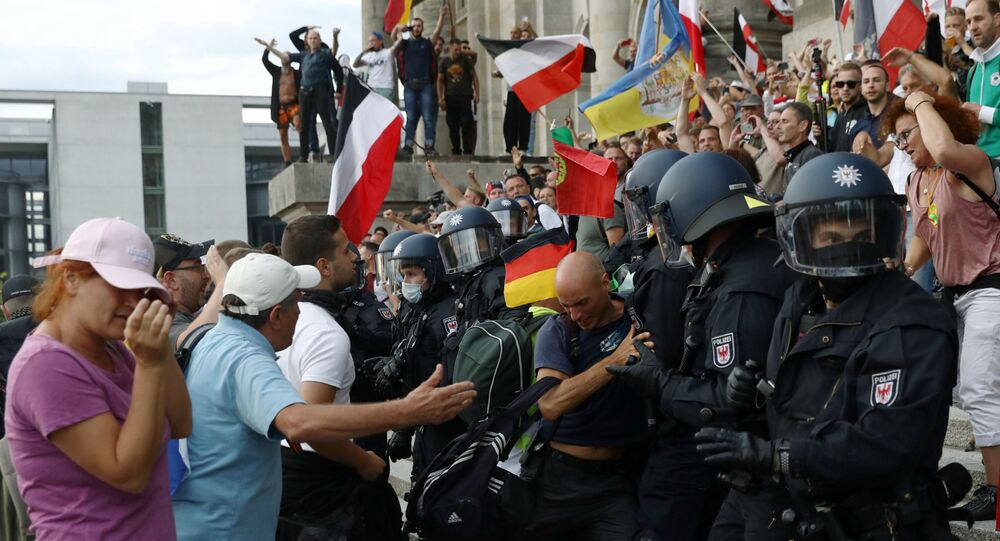 BERLIN (Sputnik) - At least 100 people were arrested on Saturday during a rally against the coronavirus-related restrictions in Berlin, and most of them were detained during a clash between protesters and law enforcement officers near the Russian embassy, a spokeswoman for the police said.

"We do yet have an exact number of arrests made today, but I can say that a large number of people were detained in the area of the Russian embassy because of attacks on the police. This is a three-digit number," the spokeswoman said, adding that there have been no serious incidents during the protest since then.

Photos and videos from the protests have emerged online.

Massive QAnon turn-out at the anti-COVID measures demo in Berlin, Germany. Many flags / signs hailing @realDonaldTrump including in the colors of ultra right “Reichsbürger“ who want the German Reich back. Some told us they believe Donald Trump is an angel. #Germany #COVIDー19 pic.twitter.com/RGt54Dyjzr

A spokeswoman for the police confirmed that approximately 18,000 people gathered in the Under den Linden avenue in the German capital’s central Mitte district earlier in the day, but added that the law enforcement agency could not make estimates on how many people subsequently joined the rally. The spokeswoman said that the police are not allowing the protest to start because many demonstrators are not wearing face masks.

This is a disgrace. For us as European Jews, seeing these scenes is scary.

This finally needs to be taken seriously by politics!#b2908 pic.twitter.com/E38XjKbIlZ

​However, some demonstrators still marched in downtown Berlin.

When the rally was passing near the Russian diplomatic mission, some protesters started throwing bottles at the police officers.

Anti-coronavirus protests on Saturdays are organised by Stuttgart's Querdenken 711 initiative group that criticizes the government’s response to the pandemic.