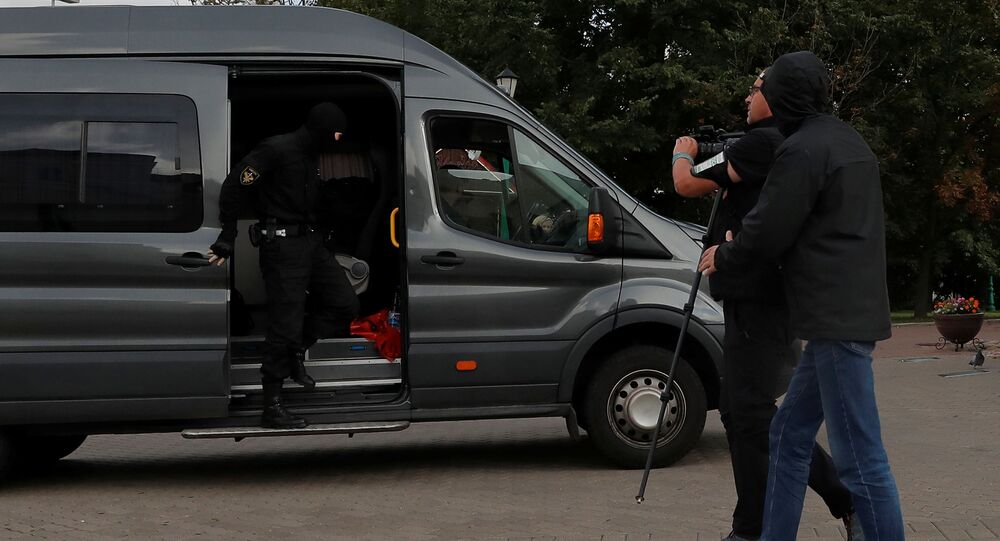 MINSK (Sputnik) - Minsk police took a group of journalists, who planned to cover an unauthorized opposition rally in the centre of Minsk, to a police station "to establish their identity", Natalya Ganusevich, a spokeswoman for the police department of the Minsk City Executive Committee, said.

"They are not detained, but will be taken to the police department for identification", she said, explaining the status of the media workers.

She did not specify the number of journalists whose identities are planned to be checked at the police station.

An RIA Novosti correspondent said that he was detained in Minsk along with other journalists. According to him, they have already been brought to an office where documents are being checked.

The Russian embassy in Minsk said that it was checking information about the detention of journalists.

"The information is being checked", Alexei Moskalev, the embassy's spokesman said.

Journalists of registered media, as well as foreign journalists accredited by the Belarusian Foreign Ministry, which were taken to the police in Minsk, will be released, the Belarusian Interior Ministry said.

"Today, the journalists were taken (not detained!) to the Oktyabrskoye police department of the city of Minsk to check the documents confirming the legality of their professional activities. Journalists of registered media outlets, as well as foreign journalists accredited by the Ministry of Foreign Affairs, will be released", the ministry said in a statement.

Among those taken to the police department, as reported by Sputnik Belarus, there is also their correspondent, journalists from AP and Reuters.

© Sputnik / Alexey Nikolsky
Belarus Unrest and Second Russian Vaccine to End Pandemic: Key Takeaways From Putin's Big Interview
Mass opposition protests broke out across Belarus following a presidential election on 9 August that saw Lukashenko reelected for a sixth term. While electoral authorities maintain that Lukashenko collected over 80 percent of the vote, the opposition continues to insist that his key contender, Svetlana Tikhanovskaya, won the election.

Over 6,700 people have been detained in Belarus during the first several days of the protests alone, according to official figures, and hundreds have been injured, including more than 150 law enforcement officers.