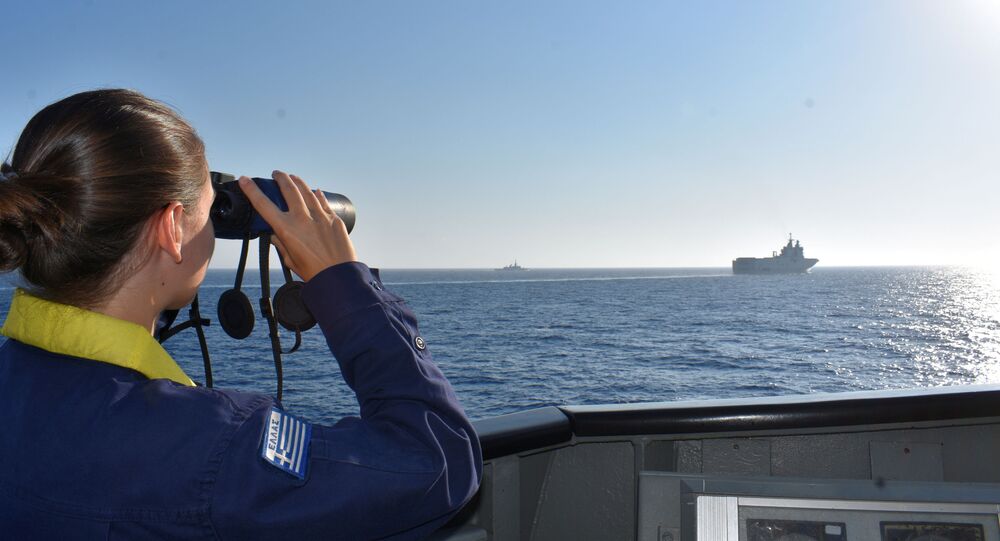 The NATO allies have competing claims to wide swathes of potentially hydrocarbon-rich areas in the eastern Mediterranean, with tensions escalating earlier this month after Turkey began exploratory drilling in an area south of Antalya claimed by Greece.

Greek Foreign Minister Nikos Dendias issued a warning to Turkey on Tuesday amid the ongoing escalation of tensions over the territorial dispute in the Mediterranean, stressing that Athens is prepared to "defend its sovereign rights," and accusing Ankara of continuing "provocations" and "violations of international law" despite calls by neighbours to de-escalate.

Speaking to reporters after meeting with German Foreign Minister Heiko Maas, Dendias said his country was prepared to hold a dialogue with Turkey on the gas drilling dispute, but "not under threats" from Ankara.

Dendias added that Germany and the European Union are "standing in solidarity" with Greece.

Maas traveled to Athens on Tuesday to discuss the situation in the Eastern Mediterranean with Dendias. He is expected to travel to Ankara later for separate talks with Turkish Foreign Minister Mevlut Cavusoglu.

'Little Spark Can Cause Catastrophe'

Speaking in Athens, Maas called "the current situation in the eastern Mediterranean...equivalent to playing with fire," and warned that "every little spark can lead to catastrophe."

Also Tuesday, Greek Minister of State Giorgos Gerapetritis said Athens would not engage in any discussions with Turkey related to the drilling dispute or security issues as long as Ankara continues to pressure the region militarily. He demanded that Turkey abandon 'all aggressive actions' before dialogue can take place.

Turkey Ready for Talks 'Without Preconditions'

Later in the day, after speaking  to reporters after meeting with Maas, Cavusoglu said that Ankara is "in favour of negotiations for fair sharing but nobody should lay down preconditions," Greece included.

Cavusoglu also warned the Greek side not to engage in an escalation of tensions, and warned that Turkey "will do whatever is necessary without hesitation" if pressed militarily.

The Turkish foreign minister also accused Greece of pursuing a "maximalist approach" in the maritime dispute, which he suggested was "against international law," and said that Athens' "provocative steps" could only disrupt further dialogue.

Greece and Turkey are holding separate naval drills near one another in the eastern Mediterranean off the Greek island of Crete on Tuesday. Greece announced the drills Sunday after Turkey issued a Navtex advisory extending the surveying activities of the Oruc Reis ship until August 27. Ankara responded Monday, accusing Athens of "sowing chaos" and announcing its own drills.

Turkish President Recep Tayyip Erdogan warned Greece Monday that Athens would be 'the only victim of a negative scenario' in case of an escalation, and promised that Ankara would not take one step back in its drilling activities in Greece-claimed waters.

Turkey has already stepped up its military activities in the region, not only in the Mediterranean but in the Aegean Sea as well, home to a long-standing territorial dispute between the two NATO allies. On Sunday, Turkey's defence ministry announced war games in the Aegean involving F-16 fighter jets. Earlier, the Greek Navy reported an intensification of Turkish submarine activity off the Greek coast, and the scrambling of Greek Air Force aircraft to comb the Aegean with anti-submarine sonar.

Greek and Turkish warships reportedly collided with one another in an incident near the Oruc Reis on August 12, with warships from both countries continuing to patrol the area.

The recent escalation of tensions between Greece and Turkey centers around the Oruc Reis's drilling activities south of Antalya and west of Cyprus in maritime territories claimed by Greece. The seismic research ship began its drilling in the area just days after Greece and Egypt signed a maritime agreement designating large areas of the eastern Mediterranean part of their exclusive economic zones on August 6.

Greece and Egypt signed their agreement several months after Turkey and the Turkish-backed Libyan government in Tripoli concluded their own exclusive economic zone deal cutting through Crete and other Greek islands. Both sides have dismissed one another's agreements as "illegitimate" or "illegal."