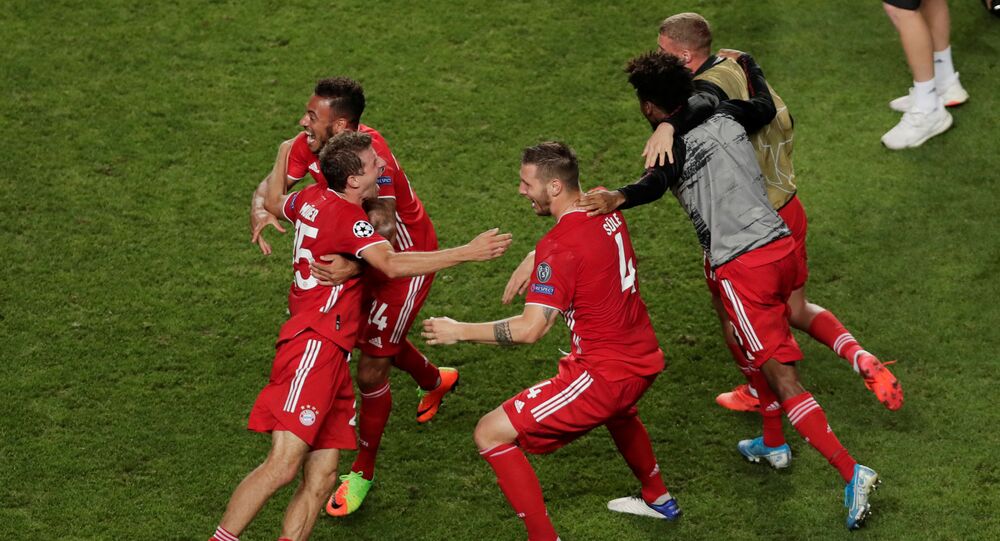 The only goal in the final match of the competition was scored in the 59th minute by winger Kingsley Coman, who hit the target after a pass from defender Joshua Kimmich, with the game played at Estadio da Luz in Lisbon.

On its way to the final, the German club claimed the victory over English Chelsea 7-1 on aggregate during their last-16 tie, crashed Barcelona 8-2 in a one-legged quarter-final game on 14 August, and defeated French club Lyon 3-0 in the semi-final game on 19 August.

The German club succeeded the first time in the 15 May 1974 European Cup final game, crashing the Spanish club Atletico Madrid 4-0 after the first final game between the teams was replayed for the only time in the competition's history. The first game ended with a draw 1-1, with Atletico's Luis Aragones and Bayern's Hans-Georg Schwarzenbeck scoring for their teams.

Bayern lift their first ever European Cup, after a 4-0 win over Atlético in the replay 🏆 pic.twitter.com/ET0UmsEqd9

On 28 May 1975, FC Bayern Munich won the title for the second time, playing against Leeds United of England at the Parc des Princes in Paris, although failing to retain their Bundesliga title, taking only 10th place.

Leeds players missed several chances to score against their German rival, including one goal, scored by striker Peter, which was disallowed for offside. In the second half, strikers Franz Roth hit the target in the 71st minute and 81st minute, respectively, winning the second consecutive European Cup final game for the team.

Bayern vs. AS Saint-Etienne

The 1976 European Cup Final game, in which Bayern claimed victory for the third time, took place at Hampden Park, Glasgow, on 12 May 1976, with nearly 55,000 people watching the game between the German and the French clubs.

In the first half, the goal by Bayern striker Gerd Müller was disallowed for offside, with AS Saint-Etienne players hitting the crossbar two times, in the 34th and 39th minute, respectively. In the second half, one of the Bayern midfielders, Franz Roth, scored the only goal in the match after receiving a pass from Franz Beckenbauer.

Bayern won for the fourth time in the final game of the competition, which took place at San Siro in Milan, Italy, on 23 May 2001, with over 79,000 people watching the match at the stadium.

The two goals in the game were scored from the penalty spot: Valencia's player Gaizka Mendieta hit the target in the 3rd minute while Stefan Effenberg Bayern midfielder Stefan Effenberg leveled the scores at 1-1 in the 50th minute. Golden goal extra time saw no scoring from either side, with Bayern goalkeeper Oliver Kahn clinching the title for his team, saving the goal after the defender Mauricio Pellegrino's kick from the penalty spot.

On this day 2001: Bayern Munich won the Champions League in a match of penalties against Valencia

There were 3 penalties in normal time and it took 7 penalties each in the shoot-out to decide the winnerpic.twitter.com/fBUHblNWTd

In the 58th season of Europe's premier club football tournament, Bayern defeated its final rival for the fifth time at Wembley Stadium in London on 25 May 2013.

The first half of the match saw no goals scored, with several chances missed by both team's players due to the several saves made by both goalkeepers: Bayern's Manuel Neuer and Borussia Dortmund's Roman Weidenfeller. In the second half, Bayern's striker Mario Mandžukić opened the scoring in the 60th minute, while Borussia Dortmund's İlkay Gündoğan equalised in the 68th minute from the penalty spot, with Bayern's winger Arjen Robben notching the final goal a minute before the end of normal time.

Seven years ago today, German football took over the continent.