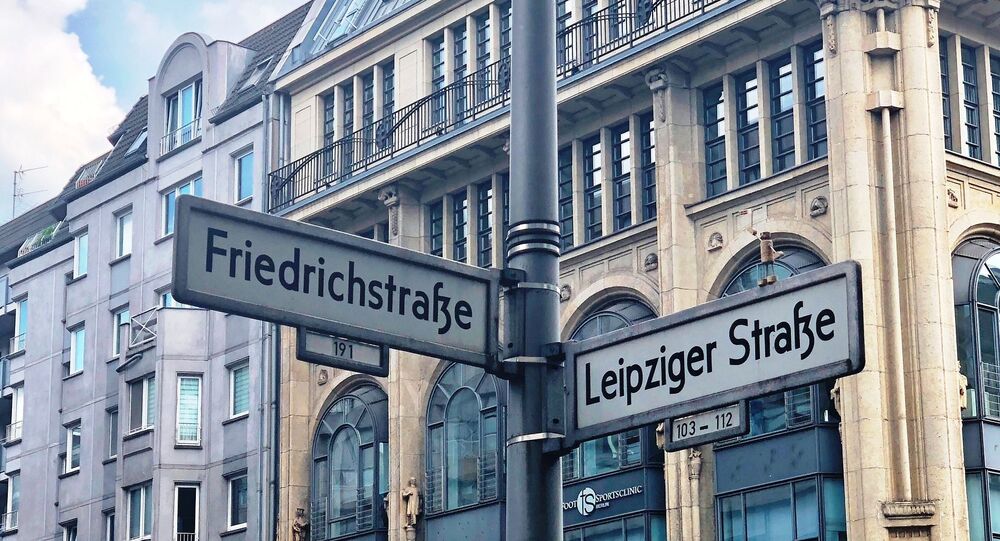 To Rename or Not Rename: Berlin Divided Over Decision To Change Names of Streets and Stations

The debate on renaming streets that refer to Germany’s colonial past has been going on for many years and recently gained momentum following global protests against racial discrimination and police brutality, which were sparked by a death of a black man in the United States, who died at the hands of a white police officer.

Authorities in the German capital Berlin said they would change the name of the street Mohrenstraße (Moor street), because it has racist undertones and "incriminates and harms the national and international reputation of Berlin". Mohren, the German name for Moor, is an old-fashioned term used to describe black people, Muslims and slaves brought from North Africa, and some people in Germany consider the street’s name racist and derogatory and refuse to use it, simply calling it M-Straße (M-Street).

The move came after the SPD and the Green party submitted a request to change the name. Officials said the street will be named Anton-Wilhelm-Amo-strasse (street) after Germany’s first black scholar, who was a well-known philosopher.

Organizations supporting Afro-Germans and groups fighting racism praised the authorities’ decision to rename the street. "This is a great day: Berlin is banishing an insult from the city," wrote Mnyaka Sururu Mboro, spokesman for Berlin Postkolonial organization, which said the city is writing "world history".

BVG, Berlin’s public transport authority, also announced a decision to change the name of Mohrenstraße metro station, but this is when the city became divided. BVG had initially planned to rename the station after Russian composer Mikhail Glinka, who spent his last years in Berlin. Famous for his operas, he influenced such prominent composers as Petr Tchaikovsky. But some people oppose his candidacy, claiming the composer was an anti-Semite. As proof, they mention that Glinka wrote music for the drama Prince Kholmsky, which is plotted around a Jewish conspiracy. They also said the composer used a derogatory term to describe his Jewish colleague Anton Rubinstein.

Russian musicologist Yekaterina Lobankova does not deny that Glinka used the offensive term but said the composer was not an anti-Semite, as he fell in love with a Jewish woman in Berlin and dedicated six compositions to her.

Norbert Abels, professor of music theater dramaturgy at the Folkwang University of the Arts and lecturer in Germany, said Glinka merely wrote the music for the drama, and the lyrics were written by poet Nestor Kukolnik, a friend of Glinka. Abels noted that the composer had a Jewish melody in the drama and "dealt very much with Jewish folk music in general".

What’s in a name?

Some people not only oppose Glinka’s candidacy but are against the very idea of renaming Mohrenstraße. Gideon Joffe, chairman of the Jewish community in Berlin, said:

"I am against the renaming of MohrenstrasseRather, one should create sensitivity in passers-by through additional information - similar to the way the stumbling blocks now show us where Jews lived in Berlin. Anti-Semitism and racism permeated all of society."

Berlin’s public transport authority said the renaming process will be open and Berlin residents as well as organizations will decide the street’s name. "The [Glinka’s] name is neither fixed, nor is it off the table", BVG’s spokesman told the Berliner Morgenpost.

The debate on renaming the streets and stations in Germany has reignited after a wave of protests against racial discrimination and police brutality swept the United States and then the world, including major European cities – London, Paris, Germany, Madrid. The protests were sparked by the death of George Floyd, a black man, who died at the hands of a white police officer. During the protests in the United States and in Europe, demonstrators toppled statues of slave owners and called on authorities to change names and streets named after people that were slave traders and had racist views.

Commenting on the current situation in Berlin, Jan Claas Behrends, a historian at Humboldt University, said:

"Generally, there are few if any figures in history who aren’t in some way problematic, and we need to learn to find ways to deal with that in an open manner rather than making them disappear."