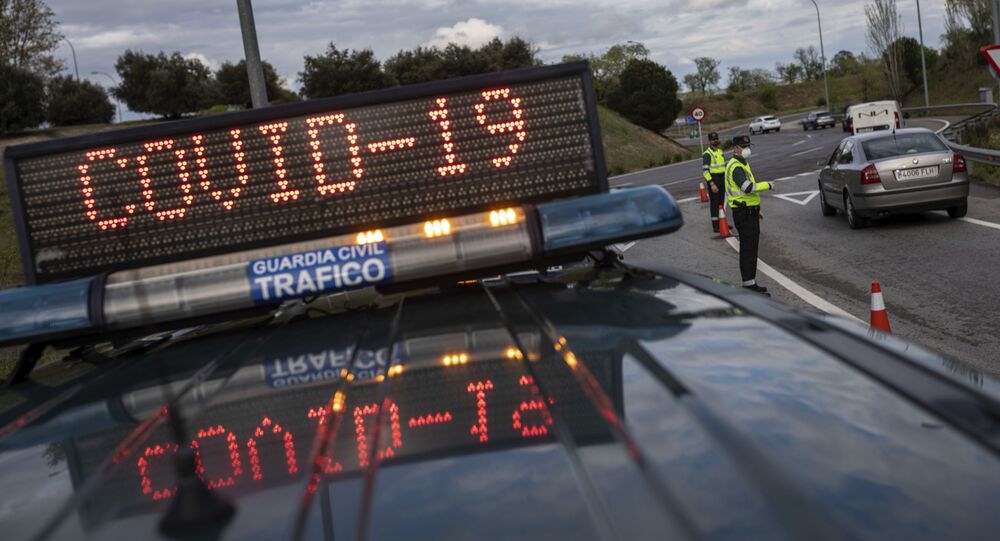 BRUSSELS (Sputnik) - Spain’s VOX party has called on the country’s prime minister, Pedro Sanchez, to resign over the government’s handling of the COVID-19 crisis and for travelling to the Canary Islands for a vacation as the country registers an increasing number of new positive tests for the disease, Alonso de Mendoza, a party spokesman, said.

"VOX has been very strong on this topic: The government must resign immediately. [VOX party leader Santiago] Abascal has announced recently that we are not going to accept another confinement because of the lack of government’s will to tackle this pandemic", de Mendoza said in a written statement.

Sanchez has been photographed vacationing on the island of Lanzarote, and the VOX spokesman said that it was unacceptable that the prime minister was taking time off while many areas of Spain are battling a resurgence of the coronavirus disease.

"It is unacceptable that Mr. Sanchez is having holidays in Lanzarote while [coronavirus] cases are rising and the economy is dropping in record numbers. This is an illegitimate government that has left to die almost 50,000 Spanish citizens while [it has also] ruined millions of workers and entrepreneurs", de Mendoza said.

The spokesman reiterated VOX’s plans to introduce a vote of no confidence against Sanchez in September and added that he hoped lawmakers from other parties would support the motion.

© AFP 2021 / Pierre-Philippe Marcou
Leader of Spanish Socialist Party (PSOE) Pedro Sanchez (C) descends the stairs before speaking at Las Cortes in Madrid on March 1, 2016 during a parliamentary debate to vote him through as prime minister and allow the country to finally get a government.

Numerous Spanish regions have seen an ever-increasing number of new positive tests for COVID-19 over recent weeks. A temporary lockdown was reintroduced in the Catalan region of Segria, to the west of Barcelona, in early July following a surge in new cases.

On Thursday, the Spanish Ministry of Health registered 2,935 new positive tests for COVID-19, a massive rise from the 1,690 new cases reported a day before, and the largest figure recorded since the nationwide lockdown was lifted in June.

Public health officials in Spain have confirmed 337,334 cases since the start of the outbreak, resulting in the deaths of 28,605 people.