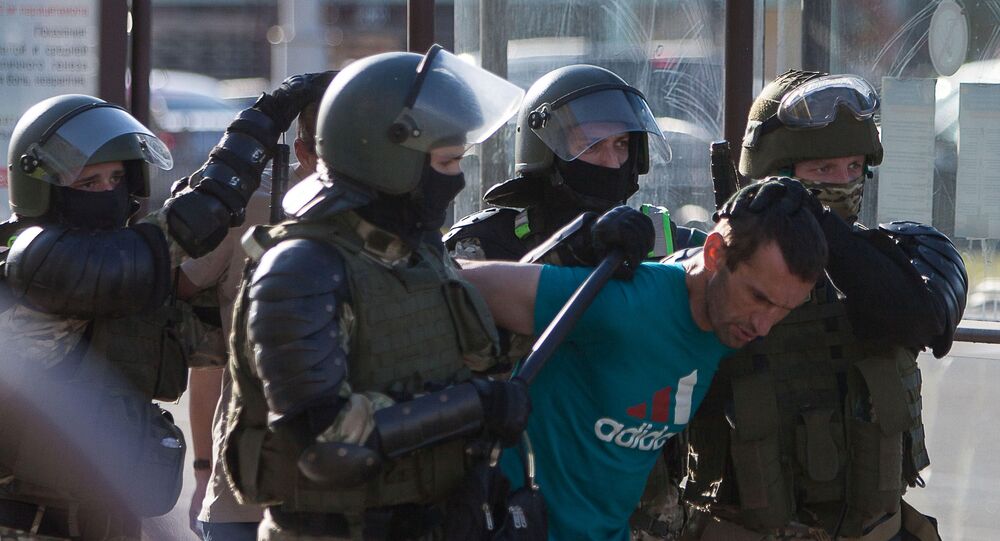 Several Belarusian cities have been engulfed by a wave of mass protests in the wake of presidential elections in the country. The latter saw incumbent president, Alexander Lukashenko, secure the overwhelming majority of votes, something the opposition puts down to election rigging.

Tuesday marked the third day of protests in Belarus. They began on Sunday following the announcement of the preliminary results of the presidential election that showed Alexander Lukasheno winning 80 percent of the vote, which the opposition claims is due to vote rigging.

Unlike Monday, when demonstrations were mostly in the centre of the Belarusian capital Minsk, Tuesday's protests moved to the periphery of the capital, where the main confrontations between riot police and protesters took place.

Demonstrators confronted law enforcement officers, erected barricades, and threw fireworks, stones, and sticks at the police. In response the latter used stun grenades and rubber bullets to try and disperse the crowds.

During the protests several journalists reported that they were attacked by unknown people with no identification, who broke their cameras and took away their press badges.

The Serebryanka district in southeastern Minsk turned into one of the hotspots of the unrest, where protesters hurled fireworks at the police, as law enforcement responded with rubber bullets.

Along with Serebryanka, Pushkinskaya Square and Rokossovsky Avenue saw clashes between protesters and law enforcement, with officers selectively detaining people and demonstrators trying to fight them off, throwing sticks and stones at the policemen.

Explosions could be heard on Rokossovsky Avenue and other areas of the city.

In the area of Plekhanova Street, officers were using stun grenades in order to disperse protesters.

Police officers stood with their shields ready in Kamennaya Gorka, in the west of the city, as barricades were being taken down.

​Dzerzhinsky Prospect also saw mass protests, especially near the Mikhalovo metro station, with riot police moving the crowd toward Pavlov Park. The most active protesters were detained, as others tried to regroup and gather in nearby streets.

Protests have engulfed the Belarusian capital and several other cities since the presidential election on Sunday. The preliminary results of the latter showed Alexander Lukashenko winning with 80% of the vote.

The election outcome was denounced by the opposition as fraud, with Svetlana Tikhanovskaya, the main opposition presidential candidate, initially filing a complaint with the Central Election Committee. She later fled to Lithuania, having recorded a video message seemingly giving up her campaign and calling for protesters to express their dissatisfaction peacefully.