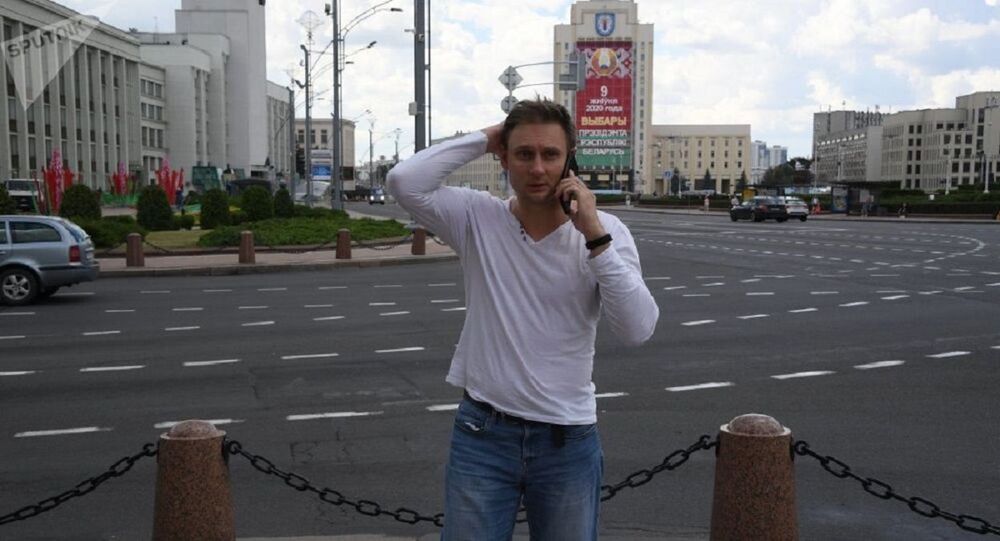 Evgeny Oleinik was detained for over six hours early Monday morning after covering the unrest which followed in the wake Sunday’s presidential election in Belarus, and was one of an estimated 3,000 people arrested, according to police figures.

“I was detained at around 6 am, with the rally ending at around 3:30 in the morning. In other words, I was arrested about two and a half hours after the meeting had ended in another part of the city,” Oleinik explained.

According to the journalist, he was detained while heading for a bus stop to make his way home, as hailing a taxi had become virtually impossible. Along the route, he spotted a column of police vehicles and decided to make some photos.

Immediately, three special police unit officers ran up to him and began demanding to know who he was and what he was doing. He told them he was a journalist for Sputnik Belarus, but was detained anyway and loaded up into the police van, where he and others were told to get on the floor, and sporadically beaten and shouted at. Oleinik’s phone was confiscated, with police forcing him to reveal the code to unlock it.

When asked why he had been detained, Oleinik was told that the department would “figure it out.”

The correspondent also recalled his detention at the station, saying he was kicked a couple of times and covered up after falling from a standing position. “It hurt, but my body became got numb as we sat bent over on chairs, face down at knee level. They didn’t allow us to change position, probably so we wouldn’t see the faces of those who had detained us,” he suggested.

"I was put on my knees facing the seat. I repeated that I was a journalist for Sputnik Belarus. In response I was told that I was from the opposition press, and some riot policemen started hitting me on the back of the head," he added.

Oleinik complained that the attitude toward the detainees from police was like that toward “cattle,” and that he, despite writing about law enforcement for a long time, “never experienced” such treatment.

“Before leaving, we were made to sign a document on out participation in an unsanctioned rally, and that we agreed to wait for a trial. I asked to be familiarized with the case materials but was denied.”

The journalist says he now faces and administrative fine for ‘taking part in an unsanctioned rally’. Oleinik has no criminal record, and, ironically, has even received a Medal of Merit from the Belarusian Ministry of Internal Affairs.

Oleinik was released from custody at about half past noon on Monday, over six hours after being detained.

© AFP 2020 / SIARHEI LESKIEC
Riot police block an area during a protest of opposition supporters after polls closed in the presidential election, in Minsk on August 9, 2020.

An estimated 3,000 protesters were arrested in Sunday night’s demonstrations, with the protests taking place after the central electoral commission announced the preliminary results of the presidential election showing incumbent president Alexander Lukashenko winning over 80 percent of the vote. The campaign of Lukashenko’s main opponent, Svetlana Tikhanovskaya, has announced that she would not recognize the results of the vote, and has demanded a peaceful transfer of power. According to police figures, over 50 demonstrators, and 39 police were injured in clashes.