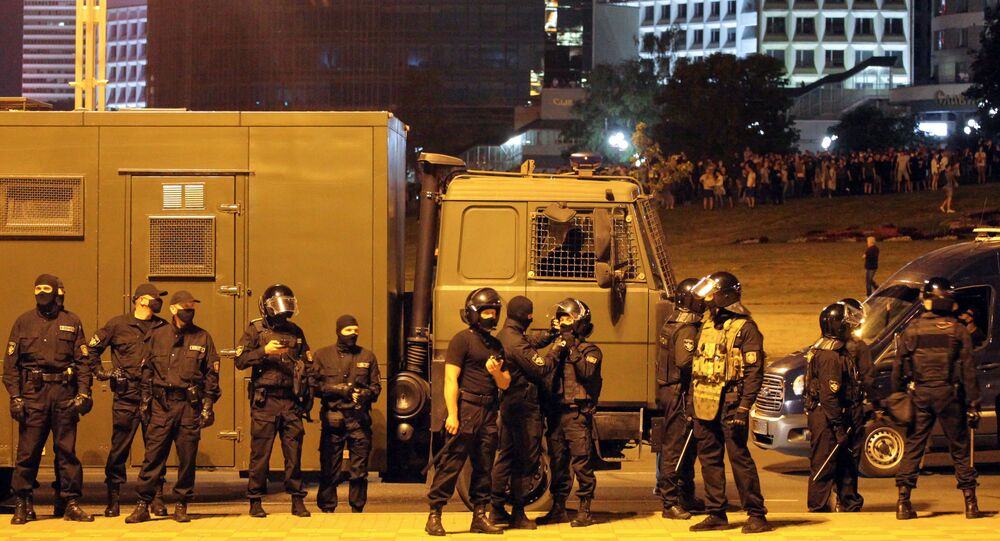 Dozens of people were injured during mass protests which took place in Minsk and other towns of Belarus after initial results of the presidential election were unveiled on Sunday evening.

Sputnik Belarus correspondent Evgeny Oleinik, detained after the unrest in Minsk, said he was released.

"I left the district office of internal affairs at around 12:00 ... I feel fine. I doubt whether I should go to hospital or not," Oleinik said.

The journalist accused law enforcement agents of using force against him.

"They did not use riot control weapons ... They kicked me a couple of times ... It hurt, and my body swelled up because we were sitting on the chairs crooked, with heads at the level of our knees, they did not allow us change the pose so that we did not see the faces of those who detained us," Oleinik said.

The journalist recalled he was just taking photos of police vans when he was detained.

"When I told them I am a Sputnik Belarus journalist, they just hit my head or my nape with a cellphone," Oleinik said.

Earlier on Monday, the Russian video news agency Ruptly said that its female freelance journalist was detained in Minsk. There has been no contact with the woman, who is presumably being held in a detention centre, the agency added.

Two cameramen working for Ruptly were detained in the Belarusian capital early on Sunday while covering the opening of presidential election polls, the Russian state TV broadcaster RT said. They have not been in touch for around 24 hours now, RT reported on its Telegram channel.

On 9 August, a presidential election was held in Belarus. Late on Sunday, several cities in Belarus saw unauthorized protests after people took to the streets to express their dissatisfaction with the preliminary results.