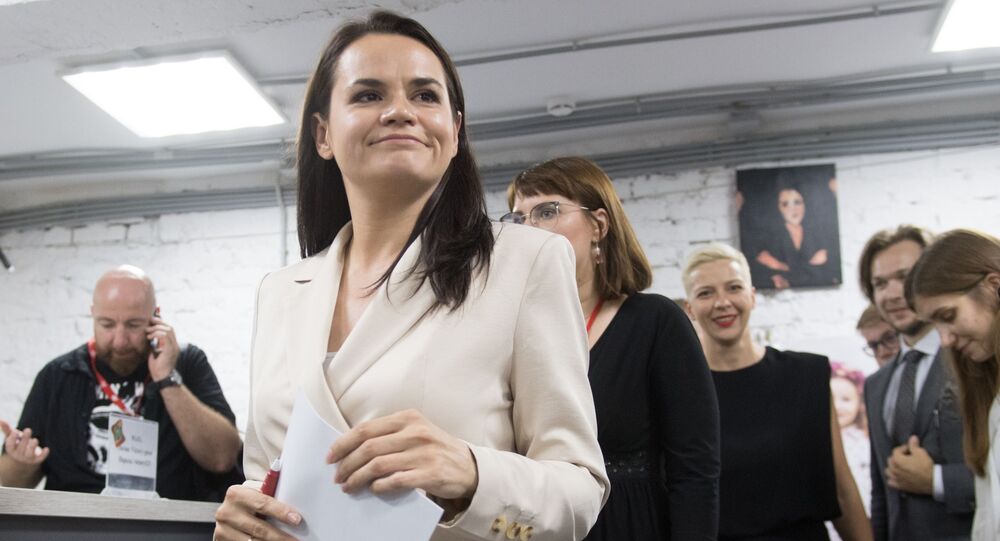 According to preliminary results of presidential elections in Belarus that were held on Sunday, incumbent president Alexander Lukashenko received 80.23 percent of the votes. However, many citizens were not satisfied with these results, with unsanctioned protests erupting across the country.

The office of Belarus opposition candidate Svetlana Tikhanovskaya demanded the "peaceful" transition of power from Alexander Lukashenko amid ongoing protests in the country, following the presidential election on Sunday.

"We are for peaceful changes. The authorities should now think about how to transfer this power in a peaceful manner. At the moment, their only way is violence against civilians. We will do everything so that this does not happen again," Tikhanovskaya said during the Monday press conference.

Svetlana Tikhanovskaya sees herself as the winner of presidential election, the office said, suggesting that additional protests in the country were still possible. According to preliminary results from the Belarusian Central Election Commission, Tikhanovskaya has received 9.9 percent of votes.

"Total of 4,652,000 people, or 80.23 percent, voted for Alexander Lukashenko," the chairwoman of the commission, Lidia Yermoshina, said on Monday during a briefing.

The preliminary results were unlikely to change, the Election Commission noted. The office of Tikhanovskaya, however, believes that the opposition candidate received around 70-80% votes, citing independent reports from polling stations around the republic.

Tikhanovskaya's team representative Maria Kolesnikova said during Monday press conference that the Belarusian government "must accept defeat", as "the will of the Belarusian people cannot be falsified".

Tikhanovskaya herself also added that she was not planning on leaving the country, nor did she see any reason for her arrest.

Numerous videos from Belarus showed how riot police were deployed with stun grenades and rubber bullets to clear the streets of protesters, as they have started erecting barricades on the roads.

The press secretary for the Belarusian Ministry of Internal Affairs said on his Telegram channel that around 3,000 people have been arrested across the country overnight following unsanctioned riots.

"On the night of 9-10 August 2020, local gatherings of citizens in the vicinity of polling stations and in central squares in 33 localities were recorded in the country. In total, about 3,000 people were detained throughout the country for participating in unauthorised mass events. Out of these, about a thousand were in Minsk and more than 2,000 were in other regions of the republic," the message said.

More than 50 civilians and around 39 police were reportedly injured during the clashes.