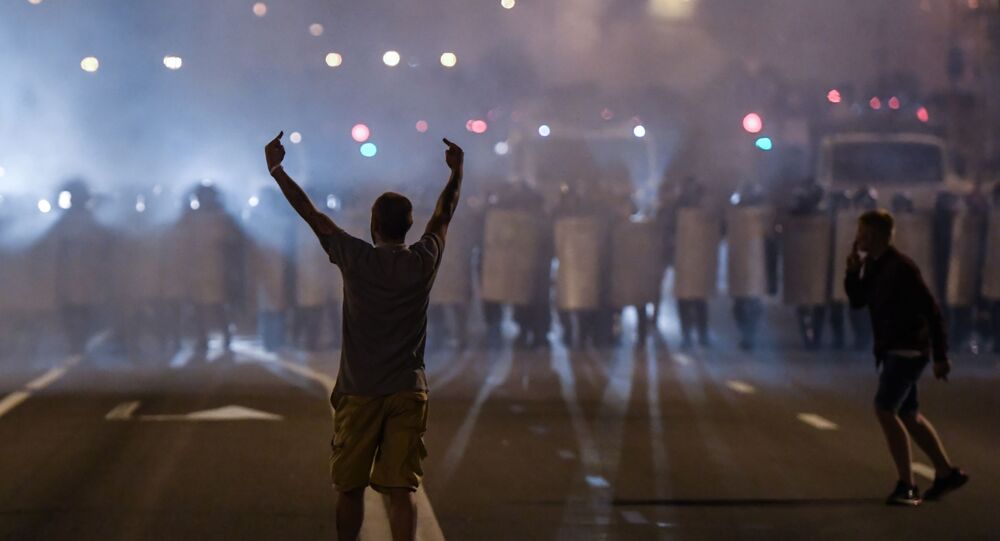 Belarus Election: What Happened at Mass Protests in Minsk Overnight

Tens of thousands of people took to the streets of the capital, Minsk, and elsewhere in the country after official exit polls showed that President Lukashenko had won a sixth term by a landslide.

Mass protests took place in Belarus overnight from Sunday to Monday as people vented their outrage at the apparent victory of the country’s long-time president, Alexander Lukashenko.

Election Day saw an unprecedented turn-out, with lengthy queues lining up outside polling stations and many people unable to cast their ballot before polls closed at 8 p.m. local time (5 p.m. GMT).

A government exit poll showed that Alexander Lukashenko, who has been in power since 1994, won the election with close to 80 percent of the vote.

The protest candidate, Svetlana Tikhanovskaya, secured just under 7 percent, according to the poll.

Polls conducted by independent observers had Tikhanovskaya at around 70 percent and Lukashenko at nearly 15 percent.

Crowds of protesters, who accused the government of vote-rigging, began to swarm the streets of Minsk and in major regional cities shortly after polls closed.

Thousands of people gathered near the Minsk Hero City monument in the city centre by 10 p.m. Minsk residents reported internet disruptions throughout the day.

Riot police deployed water cannons, stun grenades, and rubber bullets to clear the protesters out of the centre. Some people used trash bins, flowerbeds and metal fences to erect makeshift barricades on the roads.

Clashes with police occurred across the capital, with several people reported injured. The police operation to disperse the protests lasted for about four hours. Similar operations went down across the country.

© Sputnik /
Protesters took to the streets of Minsk on Sunday night after official exit polls projected a landslide victory for the incumbent President Lukashenko.

At around 2 a.m., Belarus’ interior ministry said that it had the situation in Minsk and the regions under control.

More than 3,000 people were detained and around 50 injured overnight, according to the Interior Ministry.

The national Investigative Committee has launched a criminal probe into the violence against law enforcement officers.