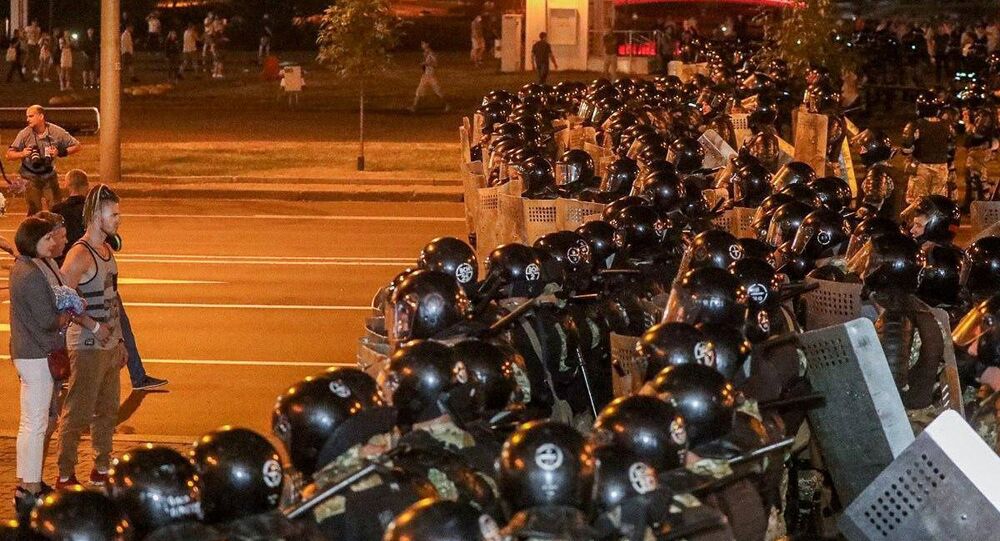 Protests engufled the Belarusian capital on Sunday after the exit polls and first data from polling stations suggested that the incumbent president, Alexander Lukashenko, is set for a landslide victory with about 80 percent of votes. The opposition claims that falsifications took place during the vote.

Criminal cases have been initiated following riots and violence against the Belarusian police, Ivan Noskevich, head of the Belarusian investigative committee said.

"The Investigative Committee has opened criminal cases (following) riots and violence against employees of internal affairs bodies. They took place in the city of Minsk and a number of other regions of the country tonight," he said.

According to Noskevich, "all illegal actions were accompanied by violence against police officers, dozens of whom were injured."

The probe has been initiated into crimes described in different parts of Article 293 of the Belarusian Criminal Code (organization of mass unrest and participation in it), Noskevich specified, adding that the detainees could face "up to eight and 15 years in prison respectively."

Noskevich pledged that the Belarusian law enforcement agencies would do "everything possible to protect the constitutional order."

Eighty people were detained in Belarus over the weekend, when the country was rocked by protests over the presidential election, local human rights activists said on Monday.

Once polling sites closed, unsanctioned protests emerged across Belarus. In Minsk, demonstrators used dumpsters to erect barricades and threw firecrackers at law enforcement officers. The police responded with tear gas, water cannons and stun grenades. Several people were injured, and some were detained. The Interior Ministry has yet to announce the exact number of those detained.

In the early hours of Monday, most of protesters dispersed, and calm returned to the streets of the Belarusian capital.