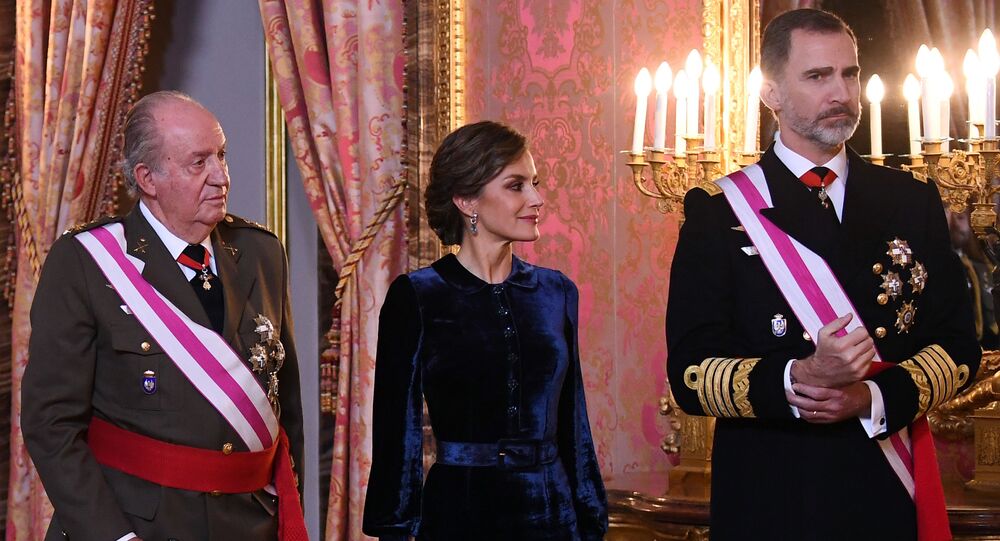 On Monday, Spain’s former monarch, King Emeritus Juan Carlos de Borbon sent a letter to his son and successor King Felipe VI, announcing his decision to leave the country “in the face of the public repercussions” as multiple investigations were launched against him in relation to alleged corruption.

Spain’s ex-King Juan Carlos, who is currently believed to be in exile in Abu Dhabi, was “banished” from the country by his own son, reigning King Felipe VI, according to reports by The Sunday Times and Daily Mail, citing sources.

It is claimed that King Felipe’s purported move was explained by the need to protect the royal family from “certain happenings” related to Juan Carlos’ affair with Danish-German lover Corinna zu Sayn-Wittgenstein, also known as Larsen, and a related corruption scandal. According to the report, it is feared now that the exiled king would not be able to come back to his country of origin. The royal house did not comment on these claims.

Sayn-Wittgenstein, a Danish-born businesswoman and philanthropist, is currently being investigated in relation to leaked tapes where she is reportedly heard claiming in 2015 that her ex-lover Juan Carlos had played a major role in landing Spain a €6.7 billion contract to build a high-speed railway in Saudi Arabia.

It has been suggested that the former monarch received a sum of $100 million from Saudi Arabia’s late King Abdullah to secure a deal in 2008. The money was allegedly then put in an offshore bank account of the Geneva-based private bank Mirabaud, several years before the deal was stricken in 2011. It has been argued that in 2012, Sayn-Wittgenstein received €65 million ($77 million) from Juan Carlos from the same account – something she said was a “gift” he has given to her “out of gratitude and love” and to “guarantee” her future. Since 2018, the Swiss public prosecutor has been investigating Corinna Sayn-Wittgenstein in relation to money laundering. The couple were reportedly in a relationship from 2004 to 2008.

As reports about Juan Carlos’ alleged involvement in money laundering emerged in March this year, his son King Felipe VI of Spain abandoned a personal inheritance from his father and stripped him of an annual stipend from the State’s General Budget, a the sum of €194,000 ($217,100).

In June, Spain’s public prosecutor’s office of the Supreme Court launched an investigation into Juan Carlos’s alleged role in striking a deal with Saudi Arabia. The former monarch, who stepped down from his position in his son’s favour in 2014 over another scandal related to his expensive trip to Botswana at the time of Spain’s financial crisis, announced his decision to leave the country on Monday.

In a letter to his son, the 82-year-old Carlos said that this decision was made "in the face of the public repercussions that certain past events in my private life are generating", and also expressed hope that his departure would allow the reigning king to perform his functions with “tranquility”. Juan Carlos is now believed to be in Abu Dhabi, where he reportedly checked into Emirates Palace Hotel on Monday evening. According to the ex-monarch’s lawyer, he will still “remain at the disposal” of Spanish prosecutors despite his leave.